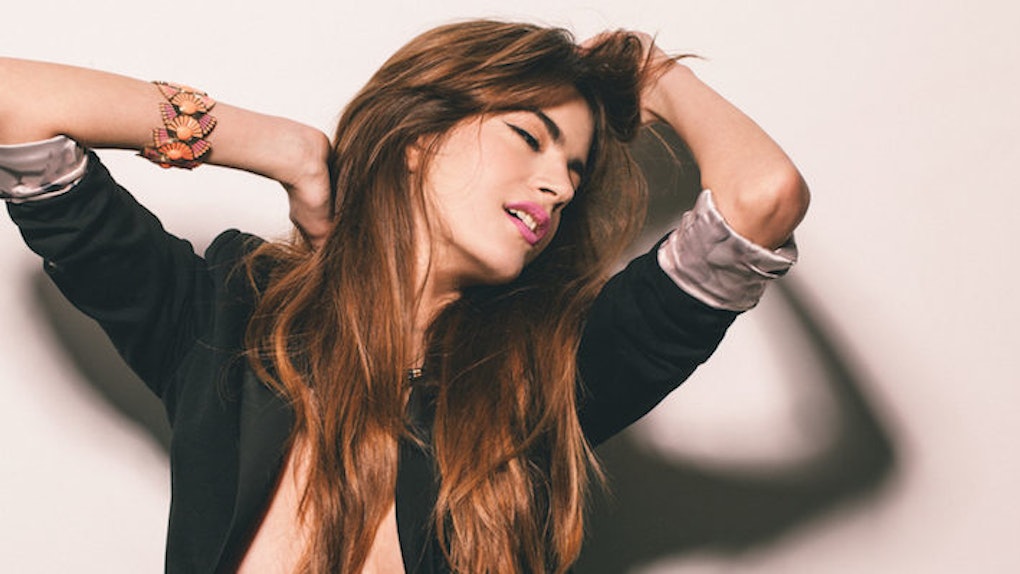 When I was a teenager, I had a fleeting friendship with a stunningly beautiful girl who had endlessly-flowing, honey-blonde, effortlessly chic salt-water-beach hair that framed her penetrating electric green eyes.

Her eyelashes were so ethereally long and luscious; they delicately tickled the smooth surface of her regal brow bone. She had long lithe limbs that fluidly moved with an inherent grace akin to a principal ballet dancer.

Her skin appeared to be cut from delicate, freshly polished porcelain purchased from a registry of a high-end luxury department store. She looked expensive.

She was the kind of pretty that's almost painful to look at because its perfection cuts you with its razor sharpness.

This impossibly pretty girl and I were close friends when I was 17. We met in a Saturday study hall for f*ck-up students in my junior year of high school. I felt ugly next to her. Tiny. Flat-Chested. In-f*cking-visible.

Despite the insecurity she conjured within me, I liked her. She was cool. And it wasn't exactly just her looks that made me feel so unsteady in her presence -- it was this elusive quality she had.

She attained the uncanny ability to breezily fit in every-f*cking-where.

She was the breed of teen girl who had the power to bend her personality so it was cohesive with every single personality in her orbit. She had zero problem modifying her opinions, as long as it meant keeping the peace and not causing an ounce of disruption.

In simple terms: She was a people-f*cking-pleaser. A bonafide “chameleon.”

I, on other hand, am no chameleon. For better or for worse, my stripes don't conveniently blend into the bark when I’m faced with impending danger. I'm one of those girls who can't help but express their opinion, even if it means their inevitable destiny is to be the vulnerable prey of the wicked predator.

I've been innocently alienating myself for as long as I can remember.

Whether it's social justice, politics, fashion or the moral high ground -- I simply can't help but twist my lips around nothing but the wholehearted truth. I'm a raging fighter of social justice and have been since the day my foot first penetrated the concrete floor of the battlefield that is the school playground.

I was the kid who stood up to the vicious queen bee “popular” girl in the seventh grade because I couldn't bear the way she used her "best friend" as her lifeless punching bag. I knew it was social suicide, but I just couldn't stop myself. It was a force greater than me.

I also couldn't bring myself to wear those hideous terry cloth Juicy Couture sweatsuits, no matter how trendy they were and how much they promised to secure me a seat at the "cool" table. I would break out into a dramatic smattering of full body hives if my body was draped in clothes I hated.

I'm the spirit animal of that boy in the third grade (there is always one) who couldn't help but wear blue nail polish to school even though he knew he would subsequently get beat up by the jocks.

Some people just can't help but be themselves, and I'm one of them. But that didn't stop me from being wildly jealous of my pretty friend with her easy-going, freewheeling personality.

She was universally liked and approved of. She never stuck her foot in her mouth or found herself in a heated classroom debate about capital punishment with the misogynistic captain of the football team or was whispered about in the school hallways for being “bisexual” (all of which happened to me).

Despite our differing dispositions, my new friend and I began to grow close with that rapid-fire speed exclusive to adolescent girls.

We shared similar moral values. We were both avid feminists. Radical conservationists. Impassioned environmentalists. All the issues I held oh so close to my bleeding heart, she seemed to fervently agree with. We were two teenage girls on the same glorious page.

Or so I thought.

One night, we were at a typical high school party, caught up in the teeming sea of hormones and f*ckboys and developing bodies and cheap booze. We were by the outdoor fire pit, peacefully sipping our PBRs, when two particular f*ckboy-ish f*ckboys sauntered over to us, their white sneakers glowing in the starless 2-am sky.

As per usual, I couldn't force my stiff lips into a smile as I vehemently disliked the aforementioned boys with every fiber of my 17-year-old being. I had overheard them make homophobic f*ckboy remarks far too many times to pretend I wasn't sorely repulsed by their presence.

My pretty new friend, on the other hand, released perfectly strung pearls of tinkling laughter at their stupid jokes and ignored their infuriatingly ignorant f*ckboy comments regarding sex, race and religion.

I was 17 (the same age as the “Dancing Queen”). The moon was radiating as bright as the fluorescent lights of a cosmetics aisle in a late-night drug store. I was tipsy from cheap beer. My platform boots were rooted firmly into the perfectly manicured grass.

And in that pinnacle instance, I had a defining moment, an epiphany of epic proportions, and all the jealousy I had so deeply harbored for my friend evaporated from my body.

It hit me like a ton of scalding hot bricks: I would rather speak my mind than be accepted by everyone. I learned the most powerful lesson of my life in an instant.

I don't need to be liked by douchebag f*ckboys to feel good about myself. In fact, I don't give a rat’s ass what they think of me in the slightest.

I suddenly felt a powerful rush of genuine self-confidence sweep through me. For the first time in my life, I felt f*cking grateful that I wasn't a goddamn f*cking chameleon.

I would rather have authentic feelings of my own than shift my moral compass to suit others. I don't need validation from everyone in the world to stay alive.

F*ck being accepted by the masses. I was grateful to be wildly opinionated.

You're not really being accepted if you're pretending to be something you’re not. It's a falsified form of acceptance, and it's not enough to sustain you. What isn't real eventually fades.

Because screw living a pent-up existence.

When you hold back your emotional truths, they build up inside of you and eat away at your soul. You become a person who is perpetually tense.

There is no greater feeling than the release of real emotions. People who are authentic are free, and they make the rest of us feel inspired and free too.

Because you will never get everyone's acceptance, anyway.

Regardless of how flexible your personality is, there is always going to be a crew of people who don't like you for whatever reason. It's not something you can help.

People project their own sh*t onto all of us, all of the time.

It's a fool’s endeavor to attempt to please everyone. So you might as well just live free and authentically and enjoy the glorious f*cking ride of LIFE.

Because speaking your truth fosters a strong sense of self.

When you attain the wherewithal to speak your mind, it's soul-affirming. Being honest cultivates a genuine sense of self, and people who are their glorious selves are far happier than the slew of tense entities who live simply for others.

Because it’s better to be an unforgettable individual than a trite chameleon.

Someone who solely aims to please the masses is the faceless human we oh so easily forget. We remember the wild individuals who spoke their mind, wore what they liked and did whatever the f*ck they wanted.

Whether we like them or not, their fierce individuality will forever be burned into our memories. Wouldn't you rather be remembered than tossed aside like yesterday's laundry?

You have to take a stand for what you believe in. Realize what it is you don't f*cking like.

Listen to your gut. Follow your precious instincts. It's through the questioning of things we feel are inherently wrong that we are able to discover all that we are.

Because you can smell authenticity (or the lack thereof).

We are drawn to authentic people. Point f*cking blank.

We have a sixth sense for phoniness. When someone isn't being real, it leaves a lingering desperation in the air that makes us uncomfortable. There is nothing more off-putting than a fake personality.

Because you have to be bold to be great.

All of the greats were bold forces of nature. Lady Gaga. Madonna. Marie Antoinette. Half of the population thinks these self-speaking icons are geniuses, and the other half thinks they're bat-sh*t insane.

There is not one fabulous person in the course of history who isn't controversial. Part of being a star is having the confidence to stick to your guns -- it's what makes you stand out from the heaps of basic, fearful masses.

Because it's better to invoke a reaction than be irrelevant.

What is the purpose of existing on this fine planet earth if you have nothing to say? If you're not trying to make the world a better place by fighting for what you believe in, isn't your purpose here meaningless?

What's the point of being born with a voice if you don't intend on using it?

Because you will never be yourself if you’re trying to be everyone else.

People are their most authentically happy, content, blissful and fulfilled when they're being true to themselves.

"I just want to be myself" is a phrase we hear over and over. Why? Because it feels f*cking good to be REAL. Even if it means scoring a few haters along the way.

“The truth is humbling, terrifying and often exhilarating. It blows the doors off the hinges and fills the world with fresh air.”