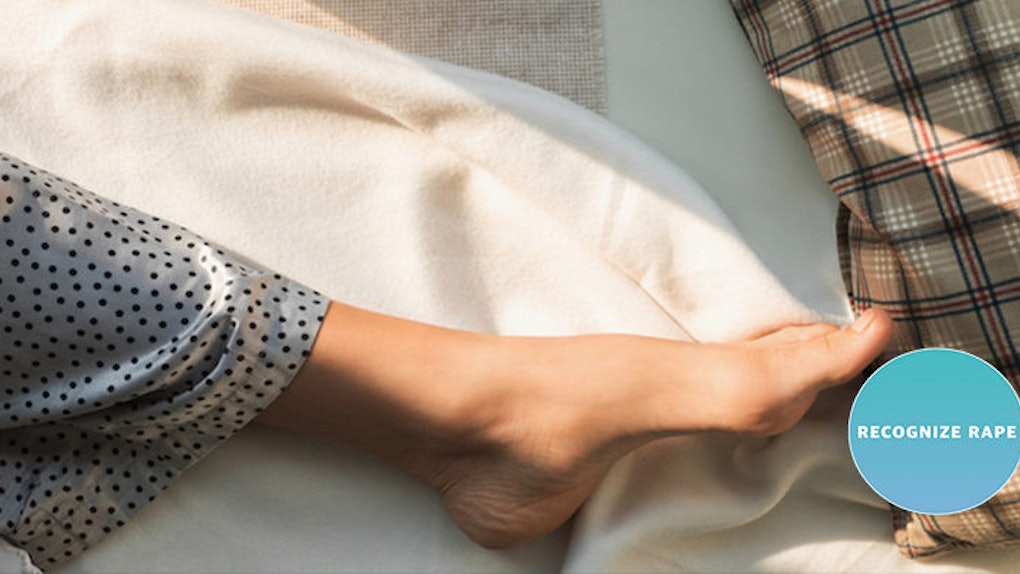 I Was Sexually Assaulted While Asleep, And I Wonder If I Dreamt It

September 27, 2013: a celebration of the start of senior year of college, a good friend's birthday, a parents' weekend at college, the most haunting night of my life.

After a long night of classes and work, my friends and I were ready to let loose. A friend of a friend, who I had never met, joined us that night. He came over to the apartment before we left for the bars.

He had a very nice demeanor: polite, outgoing, a “Southern gentleman,” as some would say. His behavior was flirty but nothing suspicious or out of the ordinary.

He had a very nice demeanor – polite, outgoing, a 'Southern gentleman,' as some would say.

Throughout the night, he made a few one-off comments about my attire and my body, but again, nothing that struck me as threatening. He was just another guy who I would be cordial to and probably never see or think about again.

We were all enjoying a night out and ended up going back to our apartment to hang out. I went to bed before a few of the other people at the apartment, including my assailant.

As I slept, I woke up intermittently to various types of physical assault – the memories are fragmented, but they are all very clear.

The first time I awoke, I was being rolled over from my left side onto my back. I remember fighting it, but I didn't know it at the time. I then remember waking up to my bra and shorts being removed. Finally, there were two instances in which I awoke to first-degree sexual abuse and once when I awoke to penetration.

The final time I woke up was around 4 am when I immediately knew something was wrong.

The final time I woke up was around 4 am when I immediately knew something was wrong.

All I could feel was confused, disgusted and ashamed.

I quietly left my apartment to sit in a hallway in the apartment complex. I started uncontrollably crying, despite having no clear processing of what had just happened or what to do.

Two other women who lived in the complex — for whom I will forever be thankful — found me in the hallway and called the police. I called my sister, who calmed me down long enough to clearly communicate with enforcement. I relayed what I could recall, and they detained my assailant.

My roommate took me to the hospital, where I was given multiple tests and multiple pills and had to speak with an investigator, a social worker and multiple other health care practitioners. I was discharged a few hours later, exhausted from trying to pull together my fragmented memories from the night before.

My parents drove down to support me, and we discussed the next steps.

I decided I wanted to report the assault, so we called the detective who put us in touch with one of the city's sex crime attorneys. We visited her on September 28, only half of a day after the assault. From then on, I was on trial.

I obtained an order of protection which kept my assailant away from me physically, but it could not keep him from controlling my emotions.

In the following months, I experienced depression, self-doubt, self-blame, flashbacks and sleeping and concentration issues, leading to me skipping class, withdrawing from my family and friends and feeling like I had completely lost myself.

Each hearing heightened the emotions. The lawyers would ask how much I had to drink, what I was wearing, if I was flirting; they would ask if we were texting, if I invited him over, how I was sure I did not consent.

The trials made me question myself even more than I already had been.

The trials made me question myself even more than I already had been.

How did I know that I was not making it up, that it was not all a dream? How could I be sure that I did not consent in the middle of the night? Did I say something to make him think that I wanted it? Should I have been more aware of my surroundings throughout the night?

Every meeting with my lawyer, every entry into my apartment and every flashback brought additional victimization. I was afraid, ashamed and alone – even though I had many people behind me.

I was afraid, ashamed and alone – even though I had many people behind me.

After one year, both my trial and my order of protection were dropped. The lack of closure from the results was not shocking to me, given that sex crimes are very difficult to prosecute.

Even though I was half a country away from my assailant during the year after the abuse, I found myself too afraid to ride the subway or walk alone out of fear that he was watching or would find me. I had nothing to keep myself safe anymore.

To this day, my assault still impacts me. I, like many other victims, have been experiencing symptoms of PTSD starting from the moment the shock of the assault hit. It has affected my relationships with my parents, friends and significant others.

I sometimes find myself closing off when conversation is critical. I have had a panic attack when sharing a bed with a person with whom I had a close connection.

Time has brought healing and has helped me accept the fact that I will never be completely free of what happened.

I will never forget what was taken from me, nor will I ever forgive my assailant for taking it. I've learned both of these things are OK, and the way I heal may be different than the way someone else heals.

I will never forget what was taken from me, nor will I ever forgive my assailant for taking it.

Most importantly, I've learned having support at vulnerable times is the most crucial part of healing.

I was lucky to have a strong support system. Even though I felt alone, I would not have been able to move forward without knowing I could turn to my close friends, family and others who publicly share their experiences.

In becoming a victim's advocate and speaking about my assault, I have often found myself emotionally exhausted — but then I remember how vulnerable I felt the days, months and years after my assault and how much I depended on others, and I regain my perspective.