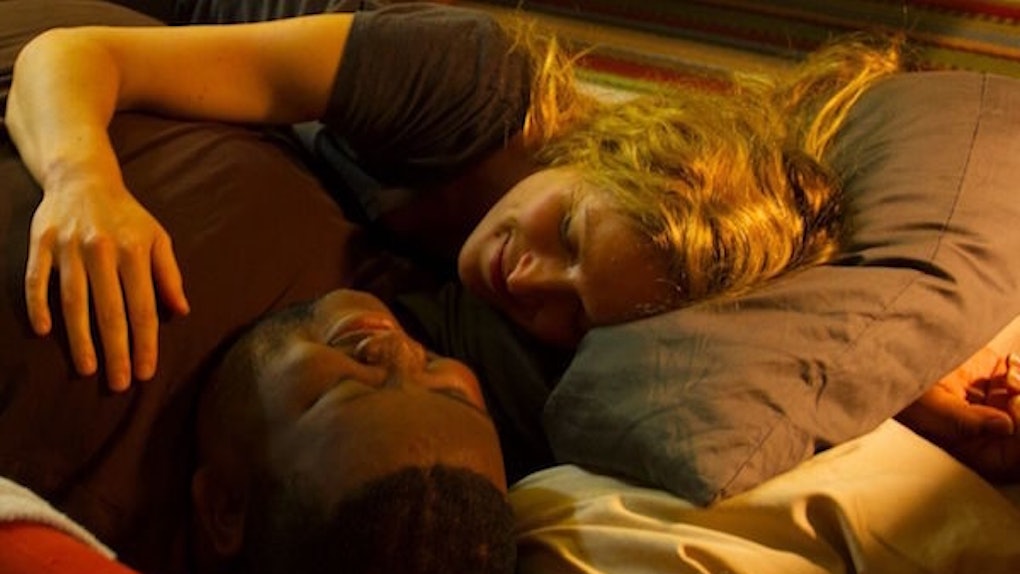 I first became aware of professional cuddling when my journalistic idol, Mo Rocca, reported on the subject for CBS Sunday Morning. It would be years later by the time I thought of it again.

After much deliberation, it was official; I was going to a professional cuddler. Now you're probably wondering, what has brought me to this decision? I'm a BIG dude. My Elite Daily avatar doesn't do my ample frame justice. Because of this, I have been called “cuddly” and likened to a teddy bear most of my life.

In fact, during my senior year in high school, I was given the nickname “Reggie bear.” It seems to fit; after all, I do look like kind of like a bear. On that alone, I should by nature be an awesome cuddler. I guess it's the equivalent of how everyone thinks tall people are automatically good at basketball.

But the reality is, I have never cuddled before. Well, that's not entirely true; I did cuddle as a baby once. They're even pictures to prove it, but after that, I never cuddled again. I think it's because I'm not really a touchy person. My cuddler would later tell me that some people genetically need more touch than others.

I've never thought of my cuddle inexperience as an obstacle. But in recent years, that has changed. With the hopes of dating prancing around in my head, if I was ever going to find a girlfriend, I knew I had to step up my cuddle game. So I decided to enlist the help of a professional, a professional cuddler, that is.

Professional cuddling does exist; it's a simple service where you pay another person to cuddle with you. Now in the immortal words of comic, Lewis Black, “There's nothing sexual about this.” In this instance, cuddling is strictly platonic.

Now, where would one find such services? The internet is a beautiful place. Look no further than cuddlist.com.

Founders Adam Lippin and Madelon Guinazzo offer therapeutic, non-sexual, cuddle sessions with a certified professional cuddler for the price of $80 per hour. That might seem steep for something most people get for free, but for people like me (self-conscious late bloomers and the perpetual touch-starved), it's a more viable option.

I browsed through the cuddlers in my area, and yes, Cuddlist has cuddlers across the US. I decided my cuddler would be Saskia Larsen, an actress and licensed massage therapist.

From her picture, she seemed warm and sweet. Saskia and other cuddlers screen their clients prior to meeting for safety. For Saskia, it's a phone conversation. She was as sweet and warm as her picture. We spoke about what brings me to inquire about professional cuddling services and what my professional background was. We also spoke about cuddle attire -- yes, cuddle attire. Clients are required to wear a freshly laundered shirt, socks and shorts or sweatpants.

At the end of our wonderful Friday conversation, we settled on Monday at 8 pm. The wait was on. I had the entire weekend to deliberate and agonize over my decision. Was I actually going to go through with this?

The more I thought about it, the more I worried. More than once that weekend, I thought about calling it off, but I heard somewhere that to succeed in life, you need to get comfortable with being uncomfortable. So in that spirit, I was ready to go.

I arrived Monday night at around 7:30 pm, a healthy 30 minutes before my session. My friend and photographer Chris accompanied me. Bless his heart; he did his very best to calm my nerves. “You're not nervous, you're excited!” Chris reminded me throughout our 50-minute drive to Central Park's Westside.

After parking, I took one last deep breath, exited the car, made my way up the stairs and through the front door. I was quickly buzzed in, and there was Saskia to warmly greet me.

“Can I give you a hug?” were Saskia's first words. After I agreed, my cuddler to-be-wrapped her arms around me as I let out a nervous giggle. Saskia then informed me that I have now entered the “cuddle zone.”

Honestly for me, it felt more like the "Twilight Zone." What was I doing here? Is self-improvement worth all this non- conventionality? While in the bathroom changing into my cuddle clothes, I took one last look at myself in the mirror and said, “Reggie you can do this! You're going to go out there and cuddle like you've never cuddled before!”

Then I realized I've never cuddled before, so I just stopped talking to myself.

I came out and heard the soothing tones of Michelle Mulcahy, a harp player. I wasn't sure cuddling had a soundtrack, but if it did, a harp player seems pretty fitting. We went into the living room, which was adorned with candles, and sat on Saskia's magically oversized couch.

This thing was huge! I'm a big guy, so I'm often worried about how I'll fare on other people's furniture, and this was a relief. Now it was time to get down to business, but not the cuddling business -- real business. Saskia laid the ground rules as she does with every client.

Rule #1: The cuddling is therapeutic, platonic and NON-SEXUAL. No funny business will be tolerated. Rule #2: We are not allowed to be uncomfortable. If one of us is uncomfortable in a position, we must tell our cuddle partner and switch to a more comfortable position. Rule #3: We must tell each other about our “touch pet peeves.” For instance, if you don't like people touching your face, speak up.

Now that the formalities were out of the way, it was finally time to cuddle. My nerves were shot. Saskia told me to close my eyes and imagine two people cuddling. She then asked me to describe what I see. In my mind, I saw two people doing a sit-down hug. Saskia asked if I would like to try that position. Consent is everything in pro cuddling.

After I say yes, she invited me to sit back. She draped her body over mine, and we were engaged in full-on cuddle. It was awkward and nice all at the same time.

On the way over, Chris asked, “What happens if you get an erection?”

The reason I thought this was because I was starting to get an erection! How embarrassing! But luckily for me, the way Saskia had positioned herself, she was hugging me from a side angle. Thankfully, no part of her body was touching my lower extremities.

It was so embarrassing, but if nothing else, it was encouraging to know that the setup still worked down there. In my perpetual solitude, I've often worried that if I didn't “use it” I would “lose it.” But this was not the time or the place. What was I to do? At that moment, I turned to something that has often helped and comforted me during tough spots: prayer.

“Oh, sweet and merciful Lord. If you have ever helped me in a situation, please let this be the one. Please return my loins to their natural restful state.”

Sweet salvation! The Lord provided! So now that looking like a complete and utter perv was out of my mind, I could now not focus on the task at hand: cuddling. And you know what? It felt kind of nice -- scratch that -- it felt very nice! Saskia asked if she could rub the back of my head, which I obliged. That felt even nicer! She then asked if we could lock hands. I agreed to that as well. In my head, I was like, “Look at you! Getting your cuddle on!”

My nerves melted away into relaxation, then into hilarity because when Saskia and I locked hands, we were in makeshift ballroom dancing position. It was funny and cute at the same time. Things were going great, until my back started to cramp up.

I thought to myself “Dude-- you're seriously getting a cuddle cramp? You've got to get in better shape.” By definition, I had broken rule number two. I was supposed to speak up if I felt uncomfortable! But my machismo wouldn't allow me to do so. My back grew tight, and I suffered in silence.

Then my back tightened some more. At that point, my machismo said, “Aight brother, you gonna say something, or do I have to say something?” So I sheepishly spoke up. Saskia very sweetly understood, and then asked me if I would like to try a lying down position.

Sensing this would lead to direct eye contact, I kept my eyes straight ahead and closed. I know I have my hang-ups, but I'm a work in progress. This is where I really felt like I was in the cuddle zone. I was relaxed, Saskia's hands rubbing my arm felt fan-freakin'-tastic!

As we lied there, we just talked. We talked about the awkwardness that I was feeling, and how relaxed I was now starting to feel. We spoke about the background music. We were having a really nice time. I now know why people make a big deal about cuddling. It's awesome!

At that moment I realized why I was there: to become a better, more open person. If I want to be in a relationship, I have to become more comfortable with my body and myself. Saskia helped me to do just that.

I felt good, I felt confident and you know what? I learned I'm a good cuddler! I guess my high school nickname of “Reggie Bear” was on point. I felt so grateful to Saskia for helping me and showing me the cuddling ropes. After our relaxing session, we sat down for a chat.

I asked what her family thought of her being a professional cuddler.

Saskia admitted that she had to approach the subject gingerly with family, but as long as she was safe, they were fine. This includes her husband. Yes, Saskia is married! She admitted that at first, her husband was a little apprehensive about men coming into the apartment and holding his wife, especially from a safety standpoint.

But being a certified psychologist and a licensed massage therapist, Saskia is a pro at weeding out the weirdos. In her two years as a professional cuddler, she's only had to turn away three clients. That's pretty good, considering how many crazies exist in a city as large as New York.

We then spoke on how therapeutic cuddling can be. Saskia spoke on how professional cuddling has helped people get through difficult life situations, even the death of a loved one. Non-sexual touch is so important to our well-being, especially in times of distress.

I cannot thank Saskia enough for the wonderful experience. I did enjoy myself, but I realized that I would not be returning as a client. Touch is nice, but I think I may be one of those people that don't need a whole lot. Another reason is the fact that the next person I want to cuddle with is a woman I'm in love with… or at least like a lot.