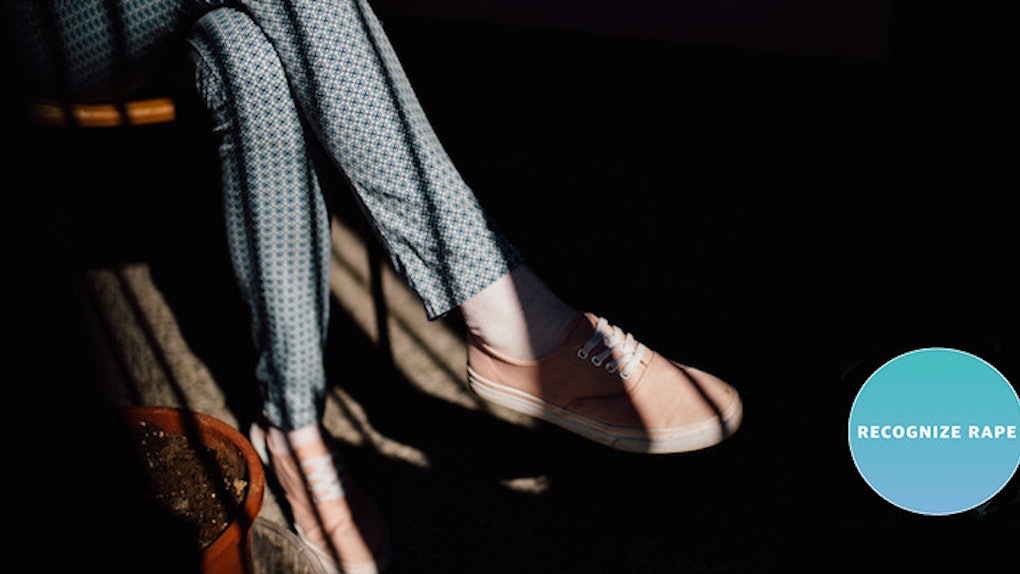 I Still Think It's My Fault That I Was Raped

I was 19 years old when I was raped by a stranger at a party.

On my way home from seeing a movie with my family, I stopped to talk to some guys sitting on the stoop down the block from my apartment. They invited me to come up and have a drink, and being young, naïve and in the throes of a breakup, I did.

I hadn't been there long before the room emptied out and I was left alone with one of them. He kissed me, and I started to feel scared; I wanted to leave.

But the drink must have been stronger than I thought — my legs weren't working and my head was spinning. He leaned close, sealed his mouth over mine and exhaled a cloud of marijuana smoke into my lungs.

While I was choking, he pinned me to the floor and yanked my jeans down. I tried to scream, but I could hardly even breathe.

Afterward, he told me he knew where I lived, and he'd see me again soon.

I went home, terrified, and realized I was bruised and bleeding. The next day he came to my apartment, and I was too scared to call the police, so he did it again.

That's one way I can tell that story. Here's another:

The summer I was 19, I was desperately lonely. My on-again, off-again boyfriend seemed to be breaking things off for good, and I spent most nights alone, riddled with depression and anxiety. So when some cute guys called out to me from their stoop, I stopped and flirted with them.

When they invited me upstairs to a party, I thought, “Why not?” I blithely went into a strange apartment with strange men and accepted a drink in one of those red Solo cups without asking what it was.

I didn't notice when everyone left except for one guy, and when he kissed me, I didn't say no or pull away.

Afterward, he said he thought I wanted it, so I must have seemed into it. He apologized for hurting me and told me how much he liked me. The next day when he showed up at my door, I let him in, confused about what had happened and scared to say no when, apparently, I said yes the night before.

I've always been bad at letting people know what I want — it's one of my worst faults. That, and I make reckless decisions.

Which one is the real story?

It took me several months to realize I'd been raped. It was too late to report it to the police, but I did go to the local rape crisis center and join a group therapy program where we went on Outward Bound and wrote in journals and shared our stories.

I saw a therapist for years, although we didn't talk about that night very often. I assured my therapist I was over it.

For the most part, I think I am over it. I've learned to say I was raped without feeling like a liar.

For the most part, I think I am over it. I've learned to say I was raped without feeling like a liar.

That twinge of doubt — that feeling that I'm not telling the whole truth — doesn't bother me so much anymore. It's become part of my identity: Whether I like it or not, I'm a rape survivor.

I know what I was thinking, though. I was lonely and vulnerable, the product of a broken home and a difficult childhood, with a track record of promiscuity.

I felt powerful when I flirted with men; I wanted them to want me. I just wanted to have a good time. I wasn't smart enough to think about what could happen.

If that's not asking for it, what is?

When I told a friend what this article was going to be about, he seemed surprised: “That's not really true, is it? You know it wasn't your fault.”

As a rape survivor, I feel like it's my duty to say, "Of course, I know it wasn't my fault. Of course, I don't blame myself."

The onus shouldn't be on women to avoid being raped; it should be on men to not rape women. I believe that with my whole heart.

Part of me bristles at the term “rape survivor” because it feels a little bit self-righteous and a little bit dishonest. Part of me will always feel guilty, damaged and ashamed.

Part of me knows there are two stories that can be told, and both are true.

Part of me knows there are two stories that can be told, and both are true.