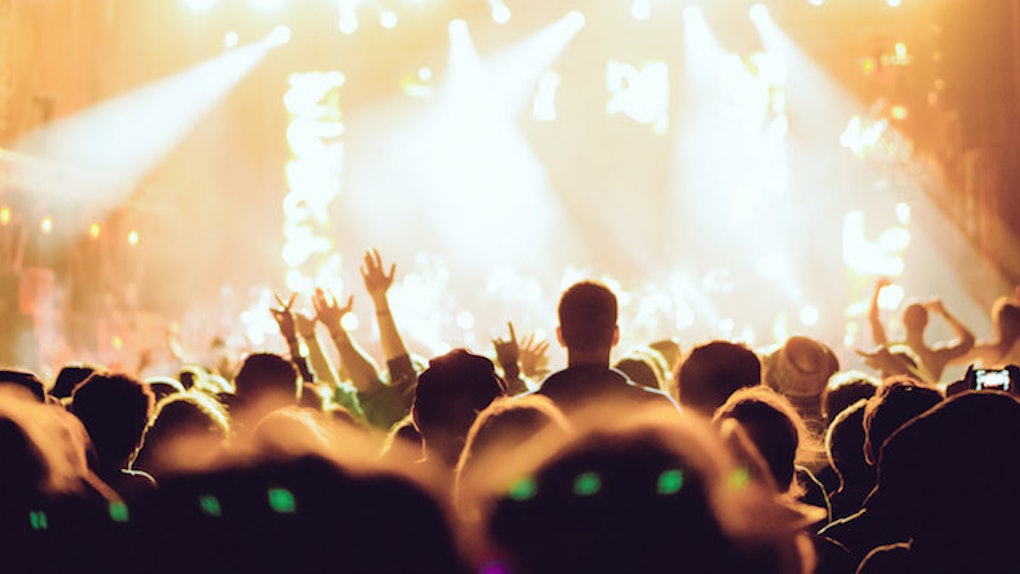 I’m a huge fan of being uncomfortable.

I’ve always believed throwing myself into foreign situations and environments is healthy and essential to life.

It encourages vulnerability, which leads to reflection and change. Without change, there would not be progression.

That’s why, three weeks into my junior year of college, I decided to pack my bags for the weekend, and venture up north to Symbiosis Gathering, a small, remote, "alternative" music festival filled with obscure tunes, roaming art installations and nudity (lots of nudity).

In fact, most of these "music" festivals aren't even about the music, but rather the people, the environment and the energy.

It's about attending the plethora of workshops, ranging from spirituality and alternative energy to composting and bioremediation.

It's about trying new foods, listening to new music and taking in new experiences.

It's about simply navigating the grounds with complete groups of strangers, and just being yourself.

I was learning more about myself in one weekend than many months of my past life combined.

So what exactly did I learn?

1. When you work for your food, it tastes a hell of a lot better.

This lesson was simple, but I had never fully realized it until I was standing in line for a food vendor with little to no money and a pretty empty stomach.

After glancing at the menu and sighing at the idea of forking over $11 for a bowl of fried rice, I noticed a note in the corner that said if you helped wash dishes for an hour, you would be fed.

Seizing this opportunity immediately, I was warmly welcomed into a traveling community of cooks.

I washed dishes while jamming out with complete strangers to a playlist of nostalgic 90s tunes. Two hours passed, and I forgot I was even working.

I had so much fun chopping carrots, peeling onions and marveling in the sense of community I felt so welcomed in.

When I was finally rewarded with my bowl of fried rice, I teared up a bit, knowing every single organic facet of that dish was contributed by a loving individual in that tent.

Words could not describe the extraordinary taste of that first bite after working two hours to receive the prize.

Thank you, Get Fried Rice, for that lesson in hard work and personal reward. I now know what it means to savor and enjoy your meal.

I later found out that half of the team had wandered in to volunteer over the past five years exactly as I did, and many of them suspended their lives to travel with this amazing community of friends.

2. I should live more minimally.

As a college student with an abundance of material possessions, moving from apartment to apartment reminds you of how unnecessary it is to have two bookcases, a fish tank and 10 pairs of shoes, right?

Do you really need that fish tank? If you have a fish, then the answer is obvious.

That’s how I felt when I traveled around Symbiosis with nothing on me except my Birkenstocks.

I never realized how popular “WWOOFing” was until that weekend.

The practice of relocating to a farm, toiling the soil of that land in return for hospitality, community and nourishment was so rewarding.

The amount of absolutely enchanting and blissful individuals I've met at these smaller festivals in search of enlightenment — moving from farm to farm with nothing but a suitcase of essentials — really opened my eyes to what is needed to be happy in life.

3. Self-consciousness is the enemy of happiness.

I've never seen as many fully naked people in one place as I did at Symbiosis.

As the weekend progressed, so did the nudity.

By day three, all shapes and sizes of men and women embraced their bodies and their self-images, and they basked in the glory of truly taking a deep breath and letting it out.

It was only after a workshop about the idea of self-image and self-consciousness that I began to realize how self-conscious I was.

I’m constantly thinking of what others are thinking of me, and how I should adapt and morph to appeal to those individuals the most. This is so incredibly unhealthy.

I learned you shouldn’t really worry about what people think of you because most of the time, they aren’t even thinking about you.

They’re too worried and busy thinking about what people think of themselves.

Say a kid raises his hand and says some stupid, unintelligent comment in class, and the entire class snickers, including you.

Now ask yourself, "How long does that comment or individual who said that comment actually remain in my mind?" If it’s longer than five minutes, you have another problem.

I truly believe the purpose of these music festivals is not about the music, but rather about the education.

The music serves as the bait, the pull and the reason thousands of unaware individuals turn out in droves, colliding into accidental enlightenment.

There’s no way I could’ve anticipated the amount of knowledge and experiences gained from all the informative workshops, inspiring discussions, speakers and, most importantly, the incredible conversations with strangers from all walks of life.

Saul Williams, esteemed poet and performer, left us that weekend with a question that penetrated my mind and has not left since.

You think you were the first generation of humans to come together on this land and celebrate? It’s disheartening to know that the only places in our society where we have near complete freedom of self-expression are these outlandish remote music festivals, the Burning Mans, Symbiosis, Lightning in a Bottles of the world. What’s the difference between this and a prison?

What I encourage all you all to do is to challenge yourselves with new and uncomfortable experiences.

Whether that takes shape in attending one of these festivals or simply talking to somebody you would have never started a conversation with, try something new and uncomfortable.

I promise you’ll end up learning something new about yourself.