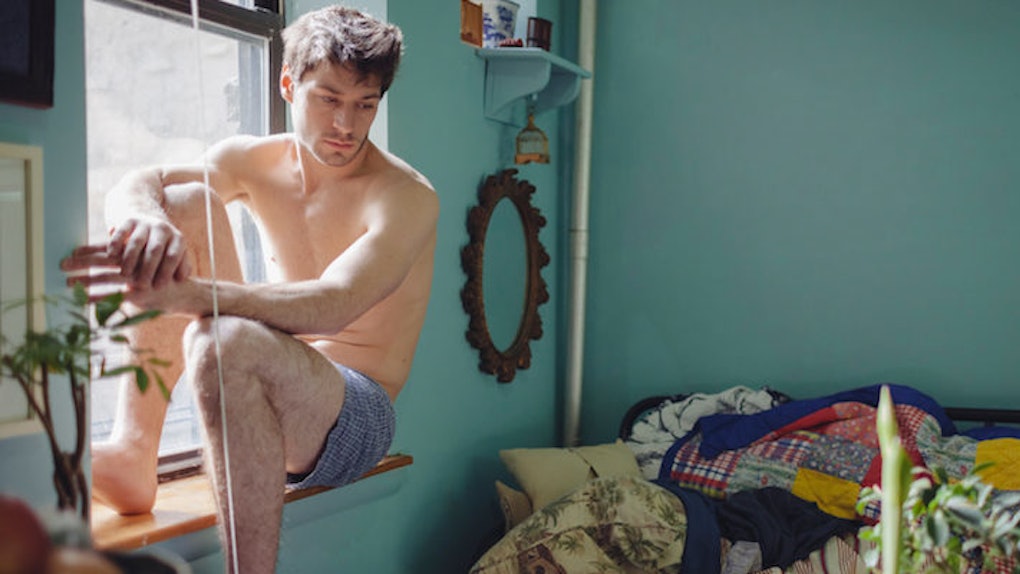 What It's Like To Live With Anorexia Nervosa As A Male

I remember the exact day my battle with food began. It was the day I decided to go on my first diet.

I was 16 and had been getting steadily chubbier for about four years. Sporting a 5’9” frame, I was quickly pushing the 200-pound mark. I had a round, fleshy face and a double-chin — triple if I bowed my head.

I declined dinner that night -- a watery, working-class take on beef stroganoff -- opting instead to eat a single piece of toast with a thin spread of margarine.

Before too long, I would be ditching the margarine. Occasionally, I’d even scrap the toast.

Hundreds of thousands of people across the globe might have made a similar resolution to cut back on calories that day, but only a handful of us would transform that decision into a vicious civil war between mind and body.

What began as a conscious act rooted in my desire to transform a husky figure that had, for years, appeared (to my mind anyway) downright loathsome in the mirror, would become an exhausting and oppressive obsession, driven by an intractable anxiety.

I suspect that’s what few people realize about eating disorders: They are mentally draining. More energy goes into thinking about food and ways to avoid it than you put into almost anything else.

The mind becomes a calculator that is constantly tabulating calories and pounds, as well as the passing hours, minutes, seconds until the next available bits of sustenance.

Functions where food is a central feature are especially anxiety-provoking, and anorexics are always thinking “on-their-feet” about schemes to avoid particular events altogether, or engage in deceptive practices like smearing their food shallowly across a plate so as to make the portion size appear larger.

When I was 12 and 13, I used to slip into the bathroom, sit on the toilet and pull up my shirt.

I’d grab rolls of flesh and pull them as far as possible from my stomach as I possibly could, in an effort to imagine what my stomach would look like without the fat.

I’d stare in the mirror at my thick eyelids and puffy cheeks until tears began to stream from my eyes.

Most days I wanted to shatter the damn glass. I wanted to be as slender as my siblings, all of whom had been blessed with miracle metabolisms.

I wanted girls to notice me. Hell, after spending years worth of lunch periods walking the perimeter of my school alone, I just wanted anyone to notice me.

I had no idea I was in the grip of a disorder with a name: anorexia nervosa.

As it turns out, most other anorexics aren't aware of their illness either, at least not until the insidious disorder has wreaked havoc on both body and mind (hence the Latin nervosa).

Unless you know where to look, conversations on male anorexia can seem scarce.

This is despite the fact that according to the National Association of Anorexia Nervosa and Associated Disorders (ANAD), “One in 10 cases of these disorders involve males.”

Norms of masculinity – even for rather sensitive kids like myself – make the concept difficult to grasp and, perhaps, even harder to articulate.

Couple this with gender norms, society’s familiarity with healthy, “scrawny guys” and the manipulative maneuvers that become second nature to anorexics, and it’s easy to see why male anorexia is under-diagnosed.

When a diagnosis does occur, it often takes place much later for males than females. ANAD reported “a study of 135 males hospitalized with an eating disorder,” in which males with bulimia shared a sense of shame over the eating disorder.

The study’s authors concluded that shame “might explain their delay in seeking treatment.”

Another study found, “Anorexic males entered treatment an average of 2.1 years after onset, which is a shorter treatment delay than has been reported for women.”

“Gymnasts, runners, body builders, rowers, wrestlers, jockeys, dancers and swimmers are particularly vulnerable to eating disorders because their sports necessitate weight restriction,” the organization reports. “However, that weight loss in an attempt to improve athletic success differs from an eating disorder when the central psychopathology is absent.”

All of these potential delays are cause for real concern: Up to 20 percent of anorexics will die of the disorder, and the fatality rate is directly linked to the length of the disorder.

NEDA notes, “Anorexia nervosa has one of the highest death rates of any mental health condition.”

Finally, studies have revealed higher prevalence of male anorexia amongst gay men, as well as heterosexual men perceived as “more feminine” by their peers.

"Physical symptoms and psychological warning signs for men and women include: intense fear of weight gain, inability to appreciate the severity of the situation, dramatic weight loss and refusal to eat certain foods or categories of food. "Anorexics may also commonly complain aloud of feeling ‘fat’ and engage in compulsive behaviors such as chronic exercise, regardless of weather conditions or personal injury.”

Most significantly, the obsession for both genders is severe and destructive.

I dropped 70 pounds in six months, and 15 more in another half year. I went to school every day with a growling stomach, nibbling on plain bread or cereal every few hours.

I began checking my weight compulsively. I’d slip into my parents’ bathroom after each meal, every sip of water and wait anxiously for the scale to offer up its digital judgment.

If I lost a pound, my racing thoughts would slow. But, if I gained even half a pound, I’d head to the nearby track and run for miles. I’d return home, recheck the scale and either smile with satisfaction at the loss of weight or sigh with frustration when the numbers remained the same.

I did this daily, sometimes twice a day. Inexplicably, I found nothing bizarre about this behavior at the time.

I began swimming in my old clothes. I hoisted baggy jeans across my waist with a worn belt. My shirts draped across my torso like bed sheets.

In the beginning, back when everyone believed it was a genuine diet, I had purchased new clothing to accommodate the early weight loss. But at a certain point, I began living in denial.

In fact, to buy new clothes would have been to admit my dieting had been effective, something I truly never felt.

I had to keep going, even as people were beginning to tell me to stop.

My mom was the first to officially intervene. Shortly after my 18th birthday, she commented on my gaunt face and pencil-thin wrists. She was the first person to tell me I had a problem, and in retrospect, I’m surprised by how defensively I responded.

In fact, I was livid.

She convinced me to see a nutritionist. The first visit was nerve-racking, but I simply nodded and whispered politely all of the things the doctor wanted to hear.

It’s as if I knew I was lying, but felt entirely justified in doing so. This whole trip had been ridiculous BS, after all. On the second visit, I told the doctor I didn’t want my mother accompanying me to the examination room.

I knew this hurt her, but for some reason, I didn’t care. He was legally obligated to comply, though he did report to her at the end of the appointment that I had not lost any weight since the prior visit.

I remained silent as my mom drove us home that day. When we pulled up to the curb, I leapt from the car, ran through the front door (past my siblings who appeared to register my entrance but didn’t say a word – they didn’t have to) and retreated to my room.

For a moment, I turned to stare at the mirror that hung on my door, cocking my head just slightly to reveal the best angle that maximized my jaw line.

Still. Not. Good. Enough. I gritted my teeth. I closed my eyes and forced myself to keep the tears at bay.

Slowly, I reached down and tugged off the heavy dress shoes I had worn for the occasion.

Next, I dipped my hand into the right pocket of my exceptionally baggy jeans and extracted several handfuls of keys and a wallet loaded with coins that I had stuffed to capacity.

I plucked a rather large rock from my left pocket. Finally, I stepped back out of my room, turned an immediate right into the restroom and relieved myself of the half gallon of water I gulped downed just two hours prior.

I felt a literal heavy sense of relief as the water flowed from my body, abating the bloated feeling in my gut.

I’m fortunate my farewell to anorexia did not come in the form of hospitalization, but rather, from a slow transition in my relationship with food.

Ironically, what began as compulsive running to stem weight gain ended up saving me. I came perilously close to my anorexia diagnosis being coupled with an exercise bulimia diagnosis.

The cardio began to activate my endorphins in surprising, new ways, and I discovered noticeable anxiety relief from running.

I began needing more carbohydrates in order to exercise without passing out (particularly in the summer heat), and I slowly realized the cardio itself was preventing weight gain.

Between the endorphin rush and the pleasure I built up in the activity, long-distance running slowly became my savior. Even after I increased my calorie intake, however, I still felt bursts of shame and revulsion after eating anything fatty for several years after.

Escaping the psychological grip of anorexia is often a drawn-out process. My body’s healing process was frequently two steps ahead of my mind’s recovery. Any weight gain could still occasionally elicit panic, which is why we ultimately threw out the scale.

When I achieved a healthy weight several years later, I decided on a whim to purchase a new scale. Within days, the compulsion came racing back. This time I tossed it, brand new, into my apartment complex dumpster, and never looked back.

Today, I won’t step on a scale, other than for a routine doctor’s appointment.

I’m tremendously grateful to have arrived at a place where I enjoy food again -- everything from the social experience of dining with friends and loved ones, to satisfying that early morning craving for a breakfast burrito and a large mocha.

But, here is the most difficult part to admit: To this day, I still hear the siren song of anorexia.

Though I long ago escaped its destructive physical effects, its habits of mind still haunt my subconscious.

Whenever I’ve eaten a large meal and my gut is bloated with temporary fullness, I seek out a mirror and pat my hand across my stomach. I rub my tummy and declare, “I’m so fat.”

That reflex is still so compulsive at this point, my wife has learned to zone it out entirely.

And that’s anorexia’s most sinister effect; even when you’ve said your formal goodbyes, you can still hear it calling you.

For more information on eating disorders visit www.nationaleatingdisorders.org. You can also call their confidential toll free hotline at 1-800-931-2237.