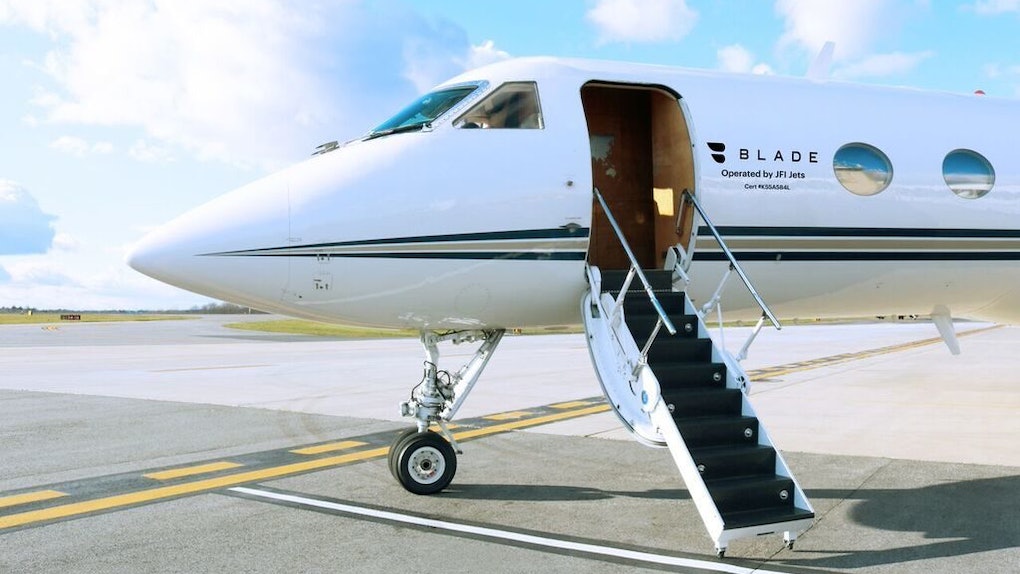 Life Goals: How Twenty-Somethings Are Making Private Jets Work For Them

"You ladies have the best table in the place!" a tanned man in a pink polo smiled as he took in the four of us laughing like old friends over salmon salads and champagne.

As I chatted with the women around me -- among them the movie producer behind some of my favorite rom-coms and the gastroenterologist who doles out health tips on my go-to morning news shows -- I had to keep reminding myself this impromptu girls' night was taking place thousands of feet above the Atlantic Ocean.

Less than an hour prior I had been listening to an elderly man in a minivan (also known as the most epic Lyft driver of all time) sing along to "Hotline Bling" while I silently stressed about the traffic building up towards FDR Drive.

But it only took about 30 seconds into my 12-minute helicopter ride from Murray Hill to Westchester, rosé in hand, for the mundane stresses of my day to subside as the tiny aircraft tilted into the air and drifted away from the packed grid of Manhattan below.

Not only was this my first time in a helicopter, but that helicopter would land directly next to a private jet (as you may have guessed, also a first) that would whisk me off to a weekend in Miami.

When I heard about BLADE, an on-demand aviation service that lets you crowd source flights or book a last-minute seat in helicopters, seaplanes and now private jets to destinations like the Hamptons, Nantucket, JFK Airport and Miami, I thought, must be nice, foreign businessmen and princesses of Genovia.

Only, according to the company's data, 75% of BLADE passengers had never flown a helicopter before (like me), about one third are between the ages of 18 and 34 (like me) and 45% are women (also like me).

So, while watching the sunset from my beige leather seat in my fuzzy BLADE socks somewhere over Virginia, I began to wonder. Who are these people? Why are our peers spending their weekends on private jets to Miami while we're home Netflix and chilling? Why am I on the LIRR to the Hamptons while you're "taking the heli?"

Don't worry. I investigated for all of us.

From Uber to Seamless, we all know we're suckers for instant, on-demand everything.  And BLADE co-founder Rob Wiesenthal says that's a huge part of the behavior he's seen from millennial users.

"Over 60% of all BLADE's seat purchases are completed only hours before departure time—and millennials don't mind sharing transportation to save money."

And, of course, there are those of us doing it for the 'gram.

“This generation appreciates experiences. They want to have them and they want to share them with friends—whether in person or over social media.”

The average short-distance flight, usually taken in a six-person helicopter, results in about 12 social media posts, according to Wiesenthal's data.

Natasha Markakis, a 25-year-old event planner living in New York City, was scrolling through Instagram when she came across BLADE. Since that first double tap, she's spent two summers using the helicopter service to and from the Hamptons. It takes 30-40 minutes total and costs $595 each way. She said,

“When I started last year, I was drawn by the experience. I wanted to arrive early and have some rosé and relax in the lounge. But this summer it was more about the convenience and how crazy my schedule is. A lot of my friends have more flexible work schedules... it feels like everyone has 'summer Fridays.' I have a lot of last-minute meetings, and I like to maximize my time... When you're working hard all week, you want to just absorb every last second of the weekend. For me, it's not just a splurge in luxury travel, it's an investment in my sanity.”

For Evan Sopher, 29, BLADE is a business resource. Sopher runs a commercial real estate company with offices in Manhattan and Miami, and when he heard about the BLADEone service between the two cities, he says the "f*cking nightmare" of flying commercial was enough to make him want to explore his options.

“If you're driving a Ferrari or a Volkswagen or a Subaru, at the end of the day it's still a car. You still have to drive on the same road. To me there's no point in spending extra money on something unless there's a tangible benefit that you can see and experience. To me, private air travel is one of those things.”

Sopher says in addition to letting him comfortably “zone out” for a bit between cities and helping him bypass juggling luggage through long TSA lines, BLADE makes him confident he won't miss a meeting.

“It brings down the anxiety and the stress of traveling significantly. BLADE gives me the peace of mind of knowing I'm going to leave here at this time, and I'm going to get there at that time.”

While he admits it is an expense (Miami flights are $2,250 each way), Sopher says BLADE has made flying private an option for him for the first time.

“Before you would've had to buy an entire plane. Now I can book this at my own leisure and pay for just the one seat I need.”

All of these reasons — work, convenience, lack of time — made sense, but as a lovely blonde staff member served my Todd English meal and I browsed through the movies pre-selected for me on my personal in-flight iPad, I knew some people had to be in it for the pampering, too.

A 27-year-old musician and singer also based in New York – she asked to not be named, so I'll call her Lucy -- told me she flies BLADE for the adventure.

Lucy's husband has a restaurant in Montauk, and he surprised her with a BLADE trip out east over the summer.

“When you leave your long day at work and you're flying over New York, it's this adventure, this romantic sense, it's inspiring. You're kind of in awe again of your surroundings. I look at it like a little treat. It feels special.”

When my flight landed back along Westside Highway that Sunday night, I sat in traffic to my apartment feeling like Cinderella in her pumpkin after Midnight. But I also felt inspired, mostly by the successful and surprisingly down to earth women I met up in the air.

Yes, we were eating caviar and checking out the gorgeous beauty products in our flight kits (I know, I hate me too) – but we were bonding over our careers and goals, not our sugar daddies or our mutual love for designer purses, like some might imagine. The women I met were hard-working moms with multiple jobs who gave wise advice and made genuine plans to keep in touch after landing and going back to our respective lives.

Between my new in-flight friends and the 20-somethings I interviewed back on solid ground, I found a common factor: real work ethic.

Evan Sopher might be running a business now, but he told me all about the grunt work he did parking cars before he even had a license (bad news for one Porsche, but that's a story for another time), and how finding a field he was passionate about drove him to be better. He told me,

“Try to find something you really enjoy doing. You don't have to be a financial whiz. I read a lot. Whenever I'm not working on my business, I'm reading. I'm taking in information.”

Natasha Markakis works for a major fashion brand, but she told me she prioritizes how she spends instead of just stocking her closet.

“Figure out what you want to splurge on and what gives you the most satisfaction and make that the goal. For me, I value experiences over possessions. So if it came down to a BLADE flight to make the most of my three-day weekend versus a new handbag, I'm going to take a flight and jump-start my weekend and hit the beach early.”

And Lucy just partnered with big names in the music industry on her first album, but instead of taking it for granted, she talked about how glimpses of luxury inspire her to work harder. She said,

“I hope to strive to get to the bigger leagues too. You have to keep building your work ethic... when you're flying in the clouds in this amazing helicopter, you want to make it there. We're the go-getter generation. It gives you something to strive for; it makes you hungrier.”

While we're striving, BLADE just added extra New Year's Eve flights to Miami, and sources say some major DJs will be on board as they head south for their performances. Maybe you'll be next to them, or maybe you'll be at another apartment party.

Either way is OK. As long as you stay hungry, who knows where 2016 will take you?