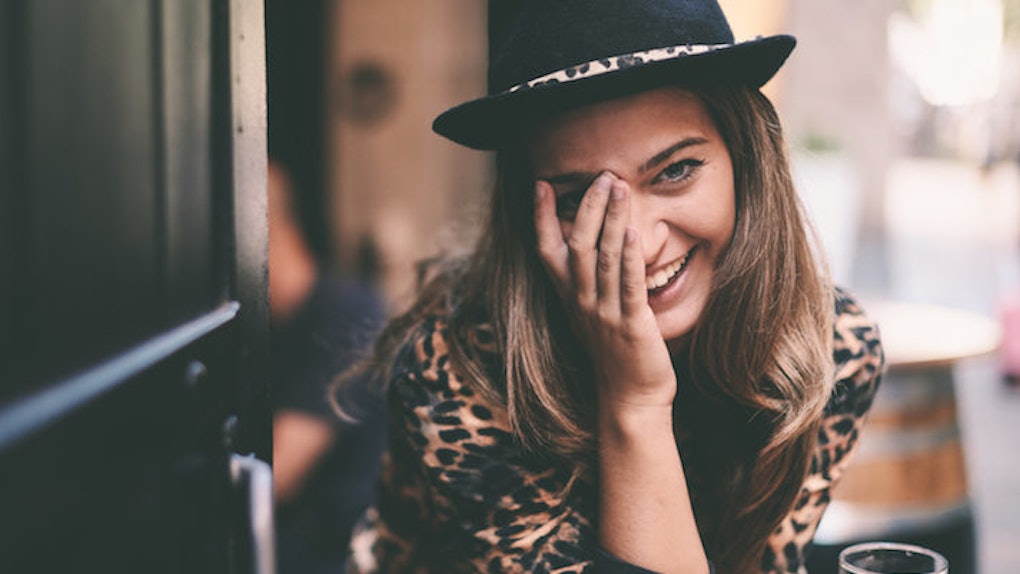 The moderately bilingual struggle is real.

You trip over words; you word over trips. You're never quite there, and people always speak too fast or too slow.

You use three words for every one you forget, and you can almost argue your way into a cheaper purse.

You've got all these thoughts in your head, but when it comes to getting them across, you feel like it's your first year at the grown-up table.

You get around, but you're still an outsider. Hey, at least you'll always impress your friends.

Learning and speaking another language is equally impressive and difficult, and certainly not without its struggles:

1. You can only adequately express yourself in the present tense.

You seem all the more mysterious when you refuse to speak about your past in another language; it’s lucky most people don’t know it’s because you can’t. Imperfect, perfect – nobody’s perfect.

2. You sound like a third grader in any grown-up discussion.

Sure, you can kill it when discussing everyday objects, but the second any type of advanced philosophizing occurs, you’re SOL.

Oh you got jokes? Well, maybe in your first language, but you’re so concerned with conjugating that irregular verb that you can’t slip in your usual nuanced brilliance. Everyone else is missing out.

4. You try to pick up a third language, and then it becomes a free-for-all.

Very few people speak franglaispañol – or so I’ve learned in my hacked endeavors in communication.

You can finally roll your Rs like a pro, and you’re showing off every which way… until people stop making concessions and despacio and doucement are the name of the game.

6. You're forced to use six words because you forgot the one you need

There was definitely a time when you knew the word for the thing that goes in the lamp to light the room, but time has wiped all trace of the term. So now you’re forced to be as descriptive as possible.

Hey, at least you’re being creative.

7. Everything is always on the tip of the tongue.

Whether it’s the word you can’t remember or the sound you can’t make, things just sit at the tip of your tongue, and you can’t form the words.

So you settle for not quite saying anything, which is immeasurably the most frustrating experience you can have.

8. You can get along, but you’ll never be fully accepted.

When you’re in the motherland, you’ve got enough to get by, to pass off some conversations, (and especially when there’s alcohol involved) to make a few friends.

But, at the end of the day, you’re going to get hit with an idiom (“the salamander licked my eyes” means you fell asleep?!) that will remind you you don’t belong.

9. No matter how much you get right, there will always be something you get wrong.

You could have nailed the recent past and conjugated the sh*t out of that irregular verb, but you should have used the conditional and the whole sentence is just-sort-of-kind-of off.

10. The only people you can impress are your friends who know jack sh*t.

You love translating menus and tossing around simple, beautifully pronounced phrases to your friends because they have no idea you just said “I don’t know what the hell I’m saying. Stop asking me to say things.”

The wine teeth are real when you need to get the conversation started. Hey, you have fewer inhibitions, and you’re not afraid of making mistakes.

So now you can tell mom that drinking has its own educational value. For the record, my mother still doesn't believe me.

12. There are so many things you don’t say just because you can’t.

You can understand everything... it’s just forming a halfway decent sentence seems to be escaping you right now.

13. Your greatest strength is ordering food.

Of course you’re going to gain weight when the only vocabulary you have down to a T is how to order food and, of course, wine.

14. People automatically respond to you in English.

You could be killing the conversation game, super happy with the accent and actually conversing about a topic you have a substantive enough vocabulary to carry out – and people will still speak to you in English. Apparently, they want to practice too.

15. You know people who speak way less than you do, and they still claim they’re fluent.

Your friend spent two weeks in Spain and can answer yes or no questions (most of the time), but apparently she’s as fluent as the people born there.

16. Saying you speak “a little” can mean anything from a few words to basically fluent.

There’s no accurate scale for speaking another language. When someone says Fala português?

And you respond um puoco, you could have been studying it for 10 years or three days.

17. You have to congregate with people who speak the same two languages as you do.

You’ve perfected your code-switching, so your sentences slip seamlessly between languages.

Your sentence constructions also come from the same place so everything becomes a lot easier.

18. You misuse one word -- and it changes everything.

One little word changes the meaning of everything, and suddenly, your killer language skills leave you avergonzada – or embarrassed.

19. You just don’t get idiomatic expressions.

So knowing something like your waistcoat pocket or -- Ich kenne es wie meine Westentasche – may not make total sense to you, but really... how much do you actually know the back of your hand?

20. Your personality never really shines through.

All the subtle nuances of you in the language you were born into don’t really exist when you’re not quite certain of the tiny little expressions that can vary a sentence.

You can speak and be understood, but the subtle things that make you, you are mostly absent from your speech.

21. You can only halfway talk sh*t about people.

Most everyone’s favorite pastime is talking smack – and it’s all the more difficult when you can’t quite put your finger on what bothers you about someone else.

And if you can, articulating just that is sometimes more trouble than it’s worth.