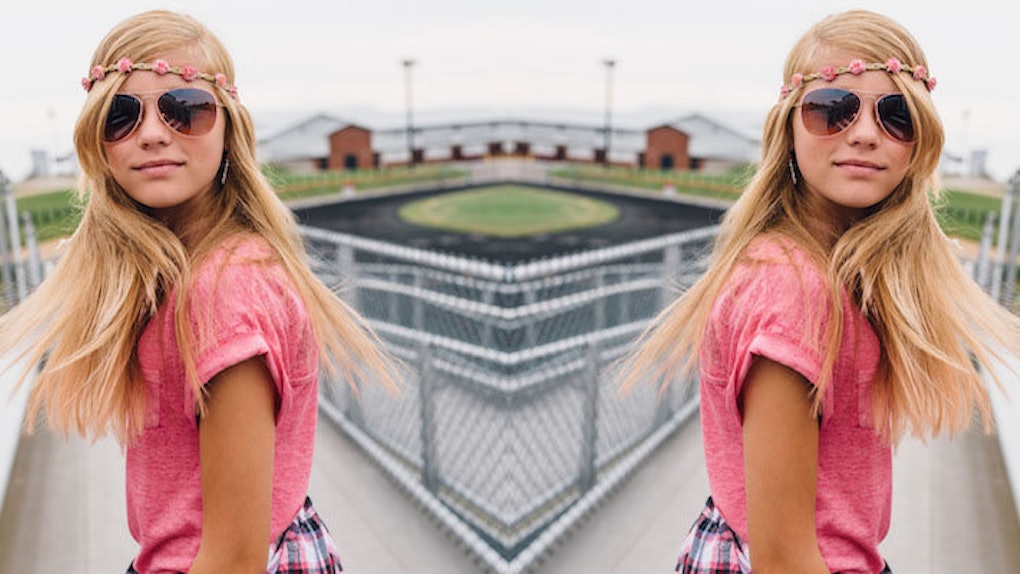 You Can't Sit With Us: How Being A Middle School Misfit Made Me Awesome

I was stuck in the dire throes of middle school when my family moved from a blissful bohemian beach town to a prim, bitchy little suburb in New England. I was prepubescent and hell-bent with culture shock.

In the blink of a keen eye, I went from a diverse school made up of artist's children to an all-white school consisting of the children of hedge funders and real estate tycoons.

I was suddenly catapulted into a parallel universe made up of chemically straightened hair, velour $300 Juicy Couture sweatsuits, shiny Kate Spade mini backpacks and freshly polished silver Tiffany ID bracelets (if you didn't sport one of those around your wrist between seventh and eighth grade, you were practically evicted from the state of Connecticut).

Middle school, for everyone who has ever existed on the planet, is nothing short of a nightmare. Except worse. Because you're f*cking awake.

I don't care who you are or where the f*ck you grew up; it's a sorely dreadful time, and no one, not a single force of nature, is safe from the wrath of humiliation experienced between the tender ages of 11 and 13.

In fact, it's one thing that unites every entity on the planet: We all collectively suffered through the pitfalls of middle school. Whether we were insanely rich or dirt poor, middle school SUCKED.

But they say it's the most harrowing experiences that carry us into our most defining moments, right? If you think about it, middle school is like recklessly being tossed into a cesspool of misery at our most impressionable age.

I believe our experiences in middle school shape so much more of our life than we dare to realize, which is what compels me to share my trite little middle school story.

Because had the story ended differently, I might not be nestled up on a chic black leather couch in the front room of the Elite Daily Headquarters in Manhattan, writing daily musings about love and sex and style and emotional discontent.

The entire course of my life might have turned out differently had this seemingly simple event not taken place. Isn't it the tiniest of things that carry the most emotional weight?

Let's cut back to little sixth grade Zara. I was a little skinny punk. I wore low-slung distressed denim and leather-studded belts and an armful of plastic colorful bracelets. In hindsight, I was pretty f*cking cool for an 85-pound, 12-year-old little sh*t.

I hung out with a slew of hyper-creative trouble makers. We were all diagnosed with ADHD and wonderfully wild and witty.

Sixth grade wasn't a terrible year. Even though I was stuck in a snarky little suburb, I wasn't one of those girls tortured with sky-high dreams of excessive popularity.

At least I wasn’t at first.

I was at an all-girls sleep away camp the summer between sixth and seventh grade when the emotional switch was flipped.

The first day of camp, everything seemed beautifully blissful. The fresh New England air seemed to hold a heavy promise of an impending free-spirited summer.

And then, my camp best friend came thundering into our cabin, Steve Madden platforms strapped to her feet, boasting her tales of newfound popularity.

Apparently she was now the most popular girl in her New Jersey middle school. Not only did she have pictures to prove it, she was teeming with that very specific (highly obnoxious) popular tween girl confidence.

Suddenly, I was vehemently tempted to taste the sticky sweet prowess of popular girl fame. After all, what did that snobby little bitch from Jersey have that I didn't have?

That fine summer, I firmly decided I would water down my awesomely rebellious style and art-nerd lifestyle in order to conform to the popular girl standard. I was determined to secure my seat at the popular table.

The week before school started, my mother took me shopping. I knew I needed a fresh look. Baggy clothes and mega headphones blasting Green Day wouldn't cut it in preppy, perfectly manicured Connecticut.

She put her foot down and refused to buy me the on-trend butterfly clips, so I stole a handful right out of the plastic jar of our local teen boutique and expertly adorned my honey brown hair with them on the bus to my first day of the rest of my life.

(Important note: That was the first and only thing I've ever stolen in my 20-something years, and I'm still seeped in dire guilt over it).

I had flat-ironed my hair so severely that you could smell burnt locks wafting behind me, serving as a crude reminder that this was all a show, that the very moment a fall rain shower hit, my wild waves would return and my true freak nature would be revealed.

Regardless, I walked into the school breezeway like I was the hottest sh*t my middle school had ever borne witness too. I didn't feel hot; I just acted like I felt hot. Fake it till you f*cking make it, sweet kittens.

"Wow, you like look, like, so different this year" echoed throughout the hormonal hallways during my first week of seventh grade.

Before I knew it, I was sitting pretty at the popular table discussing Kate Spade mini backpacks and pretending to drool over pimply f*ckboys-in-training and talking sh*t about all the “nerds.”

I knew in my gut that it was all a farce. But you know what they say: You are who you hang out with.

Before I knew it, I stopped drawing. I stopped writing. I neglected all my little punk friends.

In short, I became a bonafide wicked 13-year-old b*tch. By eighth grade, I was the most popular girl in school. I was a shadow of the independent, badass, fierce little girl I had been just two years prior.

I had lost my personal style. I wasn't an active bully; I was worse.

I stood quietly and did nothing while my new friends brutally bullied a scattering of innocent victims. I became a flat-ironed girl clone, a carbon copy adorned in Juicy f*cking Couture.

The funny thing about being one of the middle school Queen B's is this: You watch everyone fall off the popularity throne at some point -- but like winning the lotto or getting a disease, you never think it will happen to you.

I shouldn't have been surprised when my day came, but I was. I don't remember what I did wrong.

Maybe I had kissed one too many of the boys. Maybe my inner alternative nature was starting to reveal itself -- after all I had been caught listening to The Smashing Pumpkins and scrawling poetry a few times. Maybe it was just my time to go.

It's a moment burned deeply into the core of my memory. One fine spring day in the cafeteria, a vicious group of little, perfectly blow-dried, 13-year-old villains encircled me like predators attacking their prey.

"You can't sit with us anymore" the girl who had been my "bestie" sneered. It was a like a scene in "Mean Girls," only amplified because these girls were about five years younger than Regina George and were far wealthier.

Ever so easily, I was kicked the f*ck out of the clique. Suddenly, I found myself friendless. Displaced and lost with no place in the cafeteria to sit.

I spent six months crying in bathroom stalls over lunch. The popular girls didn't just oust me out of their group -- they harassed me. Started cruel rumors about me and blacklisted me.

But you know what? Thank f*cking god. Getting kicked out of the popular group was the best f*cking thing that happened to me.

It propelled me to learn some of the most integral lessons I've preciously taken with me into my adult life:

I learned how to face adversity. I learned how to rise above mean bitches. I learned that when you change your personality to try to fit in with others, it never, ever f*cking works, so you might as well go as yourself.

Most importantly, I got back to my roots. Reconnected with my skater, misfit, REAL friends who let me be who the f*ck I was. I got back into art and badass music and angsty poetry and all the other fun things the popular kids were too uptight to partake in.

I learned I would so much rather be COOL than be POPULAR. Because being cool is about being authentic. It's about doing your own thing. And it's doing my own thing that's led me to live the fabulous life I live now.

Had I forever remained sitting among plastics, I wouldn't have had the courage to start fearlessly writing, which is my lifeline now.

It would have been deemed too geeky to be into theater, so I wouldn't have studied acting in college and had a decade-long career as a working actress.

And now all of us misfits are the ones crushing it in the real world.

The boy they teased for wearing blue nail polish is now the top designer all those bitches wish they could afford to wear.

The girl they harassed for being flat-chested and alien-looking is now a top model. The science nerd is now a f*cking bonafide billionaire with a private plane.

If I hadn't been kicked out of the popular group and cried myself to sleep through the better part of eighth grade, I could have ended up a basic bitch. And that my friends, is a scary f*cking thought.