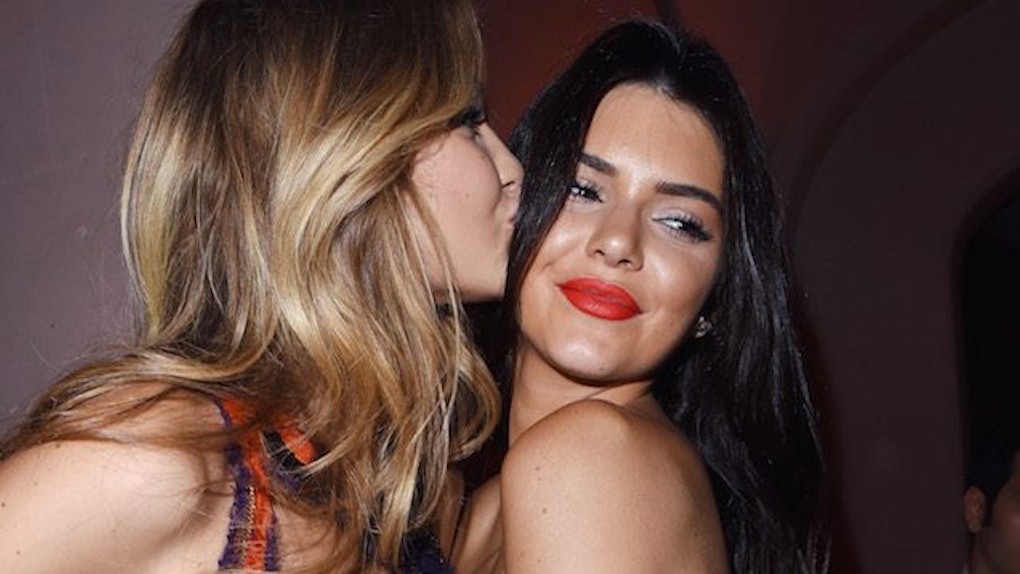 Having an oversized girl squad like Taylor Swift's can be so fun, especially for certain plans.

Nothing beats a beach getaway, bachelorette party or impromptu ski weekend surrounded by your mains.

Who run the world? Your CREW.

And let's be honest, who better to dance the night away with on the bar than your main gal pals?

A girl squad is mad fun to call on for special occasions… but when you're living a real life and planning normal weekend events, it can be a bit girl crazy. It could end up being too much #drama to handle.

After all, girls will be girls... and that's not always a good thing.

Most nights, you just want to grab a bottle of wine, bake chocolate chip cookies in the oven and have a chick flick movie marathon with your number one bestie.

You're totally OK not having a crazy night out and missing out on other plans because you're spending time with the peanut butter to your jelly.

Having that one-on-one irreplaceable bond – like Kendall Jenner has with Gigi Hadid – isn't something many can replicate.

We can always count on this trendy AF duo to give us major #FriendshipGoals.

A spectacular friendship like this one is worth its weight in gold. You have your go-to person who you consider your other half.

You can count on her for anything, and she'll never judge.

Here's why a KenGi friendship means more than a Taylor Swift girl squad.

1. In every girl squad, you'll inevitably have one or more drama types who add extra annoyance and stress to your life. That's obsolete in a KenGi type of relationship.

2. You won't have to deal with the jealousy and immaturity that can come with a girl squad.

3. You'll never have to compete for queen bee status, or have the fear of being overthrown.

4. You dedicate all of your effort into strengthening your close bond with the Gigi to your Kendall.

5. There's no competition because you both have something different – and equally incredible – to offer your friendship.

7. Even if you're miles away, you'll never grow apart. You actually feel closer because you text and Skype every single day, while members of an oversized girl squad may fade out over time.

8. There's never any gossiping or backstabbing.

9. You both give one another opportunities. In a girl squad, you may be stuck with the freeloader who never brings plans or party invites to the table. She just wants to piggyback off everyone else's plans.

10. Her family treats you like their second daughter, while your family considers her the same way.

11. She's always there when you need her the most. She's seen you at your worst, but she comes prepared with the necessities: wine, chocolate and perfect advice.

12. She can read you like a book, and you know her to a T. Essentially, you can complete one another's sentences.

13. You can always confide in her, and you know for a fact she will never repeat any of your secrets.

14. FOMO is a thing of the past. You girls can chill at home, heat up the popcorn and watch a movie on Saturday night, but still have a great time together. In a girl squad, there's pressure to go out.

Don't get me wrong: A Taylor Swift girl squad and a KenGi friendship BOTH have something spectacular to offer.

I'm a major advocate of the oversized girl squad, but I also cherish the KenGi-type friendships in my life. They're both absolutely incredible and unique in their own ways.

If you're lucky enough to have the Gigi to your Kendall, cherish that friendship until the end… because it's not handed out on a silver platter. A bond like this only comes around rarely.