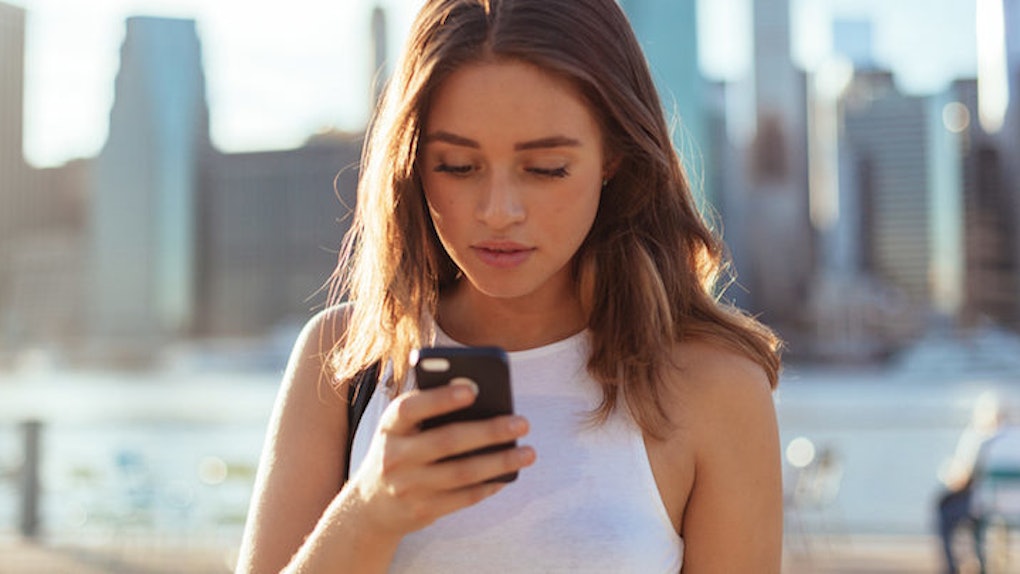 Why 'Sorry, Just Got This' Is The Worst Text You Can Possibly Receive

The other day, I was mindlessly browsing through Hinge, that dating app that connects you with friends of your friends on Facebook (which is apparently supposed to quell any sort of creepiness that may come with apps like Tinder and OKCupid that force you to interact with COMPLETE strangers), and I matched with this really good looking guy, who we will call Josh.

Josh was tall and had dark hair -- totally my type -- so I messaged him, and we started talking. During our exchanges, he was a bit of an arrogant jerk, but I went with it because I was bored and he was hot and went to Vanderbilt, which impressed me.

After a conversation that lasted several hours, I ended up asking him if he wanted to go on a date. He said yes (actually, he said, "Definitely"). We planned for 5:15 drinks that Thursday.

On the morning of our date, at approximately 10:15 AM, I texted him to confirm our plans. Hours went by, and I received no response until 5:40 PM, when he wrote the dreaded phrase, "Hey I'm so sorry, idk why I never got this," and when I officially stopped giving any sh*ts I'd accumulated over the last couple of days.

This isn't the only time I've received this text, and fuckboys like Josh aren't the only people who have sent it. "Never got this" (along with any variation of the phrase, such as "never saw this," "just saw this" or "just got this") is quite possibly the worst text message one can receive, and I've received it from friends, boyfriends, and other generally well-meaning people who just want to make sure I know they didn't purposely ignore me if they took a long time to answer my text message.

I appreciate the sentiment -- I really do -- but "never got this" doesn't do as good of a job as anyone thinks it does at letting me know he or she cares about what I have to say. So, my fellow Millennials of the world, I implore you: Never, ever use this as an excuse for a delayed in a response to a text message.

I know you "got" the message. This isn't the early 2000s, in which the excuse that you didn't have "full bars" would have been legitimate. In 2015, all phones have "full bars" at all times, and even if they don't, any blue iMessage you send me will get converted to a green Text Message on its push through cyberspace. That's just how phones work.

I also know you "saw" the message. Regardless of whether or not you are actively responding to people who message you, your phone is on you at all times and you've been using your eyeballs to look at it. So, you saw it. You did.

Just spare me the lie, okay? Message sent, message received (unless you use Sprint -- in which case, I'm sorry, you probably did just get it).

Literally any other excuse works.

Maybe in the hours you could have spent answering my text message, you were having dinner with your family or engaging in a heated debate with your roommate about whatever stupid thing Donald Trump did this time, or both. That's completely fine. But you could have just told me that.

I'm also willing to bet it's more likely you saw the text message and just forgot to respond. You could have just told me that, too.

Honestly, if you said literally anything besides the "just got this" or "just saw this" that both you and I KNOW is a lie, all would be okay.

I don't expect anyone to ever text me back within five minutes because that's crazy. It's also not something I'd want anyone to expect of me because I just wouldn't do it. If I had a dollar for every time I purposely delayed responding to a text message because I was doing something else, I'd be a millionaire. So, I don't care about delays in responses.

But what I do care about are LIES.

Or just don't acknowledge the delay at all.

Better yet, instead of scrambling for an acceptable excuse and (wrongly) settling on "just got this," I'd rather you just not acknowledge the delay at all and instead respond like no time passed.

Like I said, nobody owes anyone an immediate response to a text message, so even if it took you six hours to get back to me, just answer and pretend those six hours didn't happen.

I realize I probably sound like a lunatic, but I think I speak for every avid text message enthusiast when I say that the world would be a much better place if we all told the damn truth -- even if, like Josh, the truth is you just don't want to hang.

I'm a big girl. I promise I can handle it.