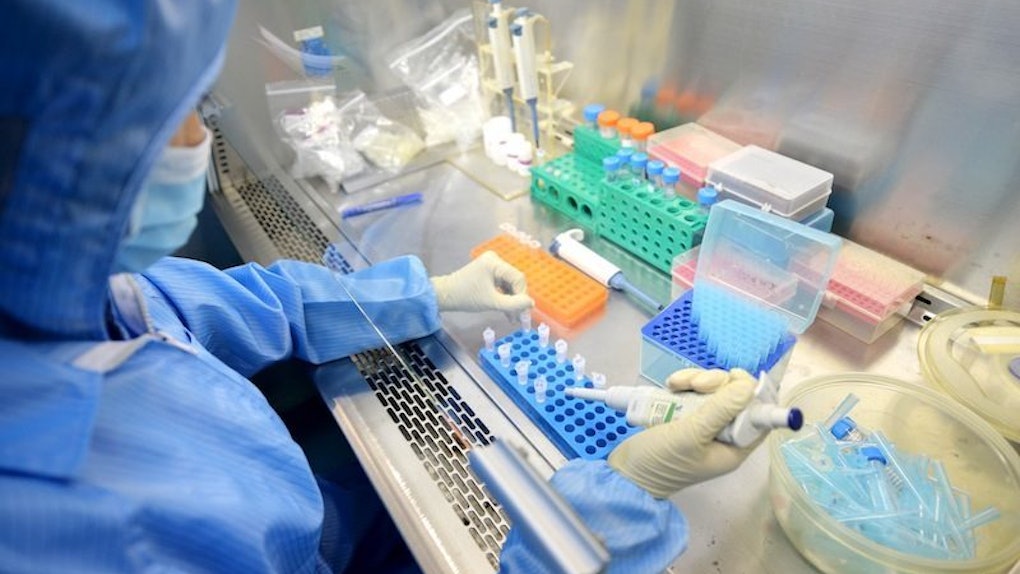 We're All Gonna Die: 7 Diseases That Could Wipe Out The Planet Tomorrow

Stephen Hawking, some "smart" guy, recently made some predictions about the end of the world. He told Radio Times, the major threats to human life were nuclear war, global warming and an outbreak of genetically engineered viruses.

Which, I mean, a-duh. You don't have to be a genius to have noticed our 50-degree December, or the fact that new potentially world-ending diseases like Ebola keep popping up around the world.

I am not a world-renowned physicist, I'm just what they call a "nerd" with a taste for "Dad Nonfiction," but I've long been fascinated by disease outbreaks and the risk they pose to our planet. And I've long been convinced that the most likely end to human existence is an outbreak of a previously unknown disease, likely zoonotic (diseases that jump from animals to humans).

Most of the information I'm about to impart I first learned about from books like "Spillover: Animal Infections and the Next Human Plague," and "The Coming Plague: Newly Emerging Diseases and a World Out of Balance," both of which I highly recommend.

Basically, the theory in both books is that as humans encroach upon the natural world, we force previously isolated animals into unnatural habits and into contact with humans, to whom they then could potentially pass on diseases for which our immune systems have no natural defenses. And in our increasingly global nation, such diseases have the ability to spread rapidly across international borders.

Given the right combination of a high fatality rate, a highly contagious pathogen and a globally connected area, a new disease could rapidly wipe out humanity. In fact, many scientists believe it's only a matter of time. (No pressure, enjoy your Netflix.)

Below, are just a few of the times it almost happened, but luckily for us, didn't. Yet. Any infectious disease on the list could still wipe out humanity if it made the right comeback.

According to Wikipedia, The Black Death killed 75 to 200 million people in Europe in the years 1346–53, or about 30 to 60 percent of the Europe's total population. Known at the time as "The Great Mortality" or "The Great Plague," the disease is thought to have been spread by fleas that were carried on rats. Many victims died within two days of developing symptoms, which included rashes, fevers, vomiting blood and grotesquely swollen lymph glands.

Back then, the disease spread slowly along maritime trade routes, taking until 1351 to reach Russia. Imagine how much more quickly the plague would wipe us out in a modern, globalized society.

The plague is not a relic of the past, either -- in 2013, The New York Times reported the United States ranked 11th in plague cases worldwide. A handful of people continue to catch plague from mice each year in the US.

According to the World Health Organization, Marburg Virus Disease is,

...a severe and highly fatal disease caused by a virus from the same family as the one that causes the Ebola virus. These viruses are among the most virulent pathogens known to infect humans.

The first Marburg outbreak happened in 1967 in Marburg, Germany; Frankfurt, Germany; and Belgrade, Yugoslavia. Investigators quickly traced the outbreak back to a shipment of monkeys from Uganda who were infected with a strange virus, more than half the shipment arriving dead. Each of the original cases were of men who had handled the monkeys or monkey tissues.

The virus started with flu-like symptoms such as muscle aches, and ended with the unlucky patients' skin actually peeling off and bleeding from multiple parts of their bodies.

Thought the initial outbreak was contained, it would continue to resurface sporadically, most notably in 1998-2000 in the Democratic Republic of Congo and 2005 in Angola, where it had an 80-90 percent fatality rate.

Zoonotic diseases generally reside in a "reservoir," where the disease lives dormant until coming in touch with a susceptible animal. Scientists eventually discovered that the Marburg virus reservoir was the fruit bat.

According to the CDC, the only recent cases of Marburg leaving the African continent were in 2008, when a Dutch and American tourist separately visited a popular cave known to house fruit bats within a national park.

These cases were quickly identified and the victims hospitalized (one survived), but as long as there are fruit bats, this deadly disease will likely continue to resurface in Africa. And next time we might not be able to contain it.

Of course, everyone has heard of that other African hemorrhagic fever, due to recent and ongoing outbreaks.

The World Health Organization says that while the first Ebola outbreaks occurred in remote African villages near rainforests, the most recent outbreak has involved major urban areas, and fatality rates have varied from 25 to 90 percent in past outbreaks.

Again, it's thought that fruits bats are the blame, hosting the Ebola virus and infecting animals like monkeys, chimpanzees and gorillas, who then infect humans who handle or eat their meat or otherwise come into contact with their secretions, blood or organs.

Bats are often involved in the spread of zoonotic disease, partly because humans are encroaching increasingly upon their territory and also because their ability to fly makes them highly mobile and they spread their feces over a wide area.

Because of the proximity of many remote areas to increasingly disturbed rainforests, a variety of viruses spread by fruit bats pop up sporadically in areas of Africa, South America and Malaysia, to threaten the safety of humanity, including Lassa Fever, yellow fever and Nipah. In Australia, fruit bats spread Hendra to horses, which can then be passed on to humans.

We've been lucky that, so far, Ebola has been mostly contained to remote areas, which keeps it from rapidly spreading and erupting into a large-scale outbreak before scientists and health care workers can control the outbreak. But responders continue to treat Ebola as a very serious risk, and brave health care workers continue to risk their own lives by traveling to centers of Ebola outbreaks to contain the disease and protect the world from the threat of this often-fatal illness.

Influenza viruses that circulate in pigs don't usually infect humans. But occasionally, as in the 2009 H1N1 pandemic, they do. In that outbreak, the virus was made up of a mixture of bird, human and swine viruses.

According to the CDC, because this virus both infected humans and was easily transmitted from person to person, it caused a pandemic. Luckily, the fatality rate for swine flu was higher than the average influenza virus, but not ultimately high enough to cause a serious threat to the world's population, and the pandemic emergency was declared over on June 23, 2010.

However, viruses regularly hop from pigs and birds to humans, and if a highly fatal variant were to emerge with a quick, airborne transmission, the world could find itself in serious trouble à la "Contagion."

The 2003 severe acute respiratory syndrome (SARS) global outbreak killed relatively few people worldwide, and yet, it is so easily transmitted (through droplets released when a person coughs or sneezes, up to 3 feet away), the National Select Agent Registry Program has declared the SARS coronavirus to have to the potential to pose a severe threat to public health and safety. A more virulent strain or variation could pose a serious risk to humanity.

There have been several world-threatening flu outbreaks, perhaps most infamously the Spanish Flu pandemic of 1918, which wiped out 50 million people worldwide or up to 40 percent of the world's population.

The disease's high mortality rate as well as its short incubation period made it so dangerous -- many people died only hours after their symptoms began. Unlike other flu epidemics, which often hit babies, the elderly and others with weakened immune systems hardest, this flu actually affected the young and healthy disproportionately, due to a quirk in which it killed through an overreaction of the immune system.

Major flu epidemics come around at an average rate of every 40 years or so, and any one of them could be the BIG ONE: a virulent new strain that humans have no protection against.

One of the most impactful zoonotic disease in recent memory, HIV, had such a long incubation period that it was able to spread widely before anyone was even aware of its existence. In fact, it's believed to have jumped from a chimpanzee in Central Africa to humans who ate their meat as far back as the 1800s.

The virus then very slowly spread across Africa, especially when inhabitants of rural areas began to travel to urban areas for work, eventually emerging in other parts of the world and the US in the 1970s.

While HIV and AIDS obviously became a global pandemic that affected and continues to deeply affect people everywhere, the virus's relatively difficult transmission methods -- being spread by bodily fluids, mostly through sexual transmission and blood, kept it from completely wiping out life on Earth.

But for all we know, the next big killer is already making its way toward us.

The whole thing about zoonotic diseases is they pop up seemingly out of nowhere. They may have been harbored in a rodent or insect "reservoir" for hundreds of thousands of years, but we won't know they exist until man's increasing influence on the natural world knocks one of out of hiding and into a vulnerable human.

The NY Times reports, "more than 300 instances of emerging infectious diseases occurred between 1940 and 2004." Scientists agree that the "next big one" is likely to be zoonotic, likely to be a virus, and likely to have "high 'intrinsic evolvability,' meaning that it mutates especially quickly or recombines elements of its genetic material during the process of replication."

Luckily, scientists and world health organizations everywhere are keeping a close watch on emerging pathogens and brave volunteers regularly tromp into hot zones at their own risk to help keep the rest of us safe from a fatal disease outbreak.

Other than supporting their work, there's not much we can do to prevent a world-ending pandemic, other than the same old basic public health wisdom, simple as it may be: Cover your mouth when you cough, your nose when you sneeze, stay home when you're sick, and especially avoid crowded areas like public transporation.

Oh, and wash your hands. A lot.