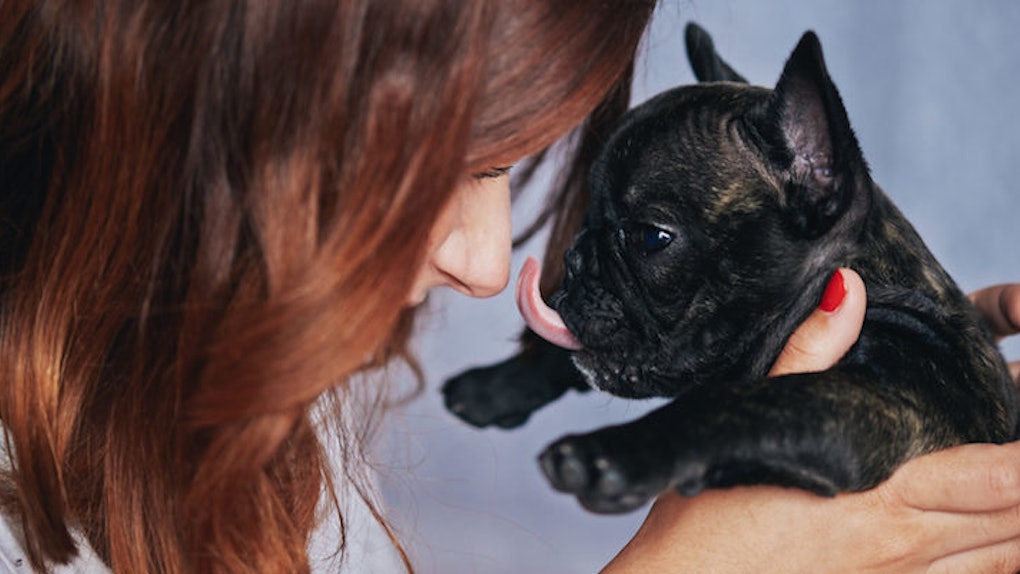 Twelve years ago, right before the worst breakup of my entire life, I adopted a dog.

The shelter named my mid-sized shepherd mix “Slick” because when they’d found him wandering the streets, he’d been shaved to the skin. He wasn’t what you’d call an in-demand dog.

He was 4 years old, and he had heartworm. His ears were set crooked on his head. In the four months he’d been at the shelter, not a single person had taken him out to consider adopting him.

While every other dog in the shelter clamored, barked and jumped around like they had springs in their legs, begging for attention, this one stood quietly, staring at me with bright brown eyes and a calm doggie smile.

I’ve never believed in soul mates, nor in love at first sight, but the closest thing I’ve ever experienced to either one was when I took this dog out of his kennel to meet him.

From that moment, he was my dog. Unlike the other animals, spastic with freedom at being released from their cages, he merely sat in front of me. His attention and his steady gaze focused squarely — and solely — on me.

He came home with me, and I immediately renamed him. I called him Brinks because I’d had my house broken into recently by neighborhood teenagers, and my police officer brother told me the best deterrent to burglary was a dog. He was my four-legged security system.

I was living alone at the time, struggling through the death throes of an unhealthy relationship. Days after I brought Brinks home, it finally gasped its final breath. Suddenly, I was single, but for the first time after a breakup, I wasn’t alone.

He had life-threatening worms wrapped around his heart, and they were slowly strangling it. Mine was shattered into pieces, and we started working on our suffering hearts together.

Brinks endured shots of arsenic into his back and six weeks of enforced inactivity as his welcome to my place. I began the always painful process of knitting together a broken heart.

But this time was different. This time, I had a creature who needed me, who loved me wholly and completely.

He would stretch out beside me when I lay in bed crying, his head resting on my chest and his warm eyes steady on mine. He would curl up on the sofa with me, watching reruns of "Sex and the City" for hours on end.

He made me laugh at a time when I thought nothing could possibly be funny.

He would do so with his big goofy dog grin, and the way he would start deep, rhythmic breaths I called “happy breathing.” I'd roll over almost entirely on top of him and give him too-tight hugs and kisses.

He craved affection as badly as I needed to give it, and he returned it in measures I’d never experienced from any boyfriend.

If I got up to grab another bag of Cheetos (post-breakup binge eating), refill my wine glass (you know how that goes) or get another box of tissues, he trotted at my heels, contentedly curling into a ball near wherever I settled.

When we went into the backyard, he peed, sniffed and explored, but he always checked over his shoulder to make sure he knew where I was. He wanted to know I was nearby.

If I went out of the house, he eagerly jumped into my Honda and happily accompanied me. His nose jutted up out of the sunroof to take in all the scents of the areas he was still too sick to go explore any other way.

As his lips blew back hilariously in the wind, or his tongue lolled happily out of his mouth, he rested his head on my shoulder and watched the road as intently, as if he were my navigator. Dog truly was my copilot.

It sounds ridiculous, but Brinks turned my “me” into a “we.” Suddenly, I wasn’t just a single girl alone; we were a family, a household.

Yes, my heart was broken, and his was in danger, too.

But gradually, as the poison of his treatment worked through his system, it killed off the worms strangling his heart. And as I fed him, cared for him and walked him slowly along the beach near where we lived, the pain strangling my heart began to fall away. I started to heal with him.

What we both went through seemed horrible at the time, but it made us stronger, healthier.

When I finally started dating someone again, Brinks showed me he was a good man.

The first time he stayed over, this man crept out of my bed in the middle of the night to use the bathroom.

As I secretly watched through slitted eyes, I saw him stop to lean over and gently stroke my dog.

He wasn’t trying to impress me or suck up; he thought I was asleep. His treatment of Brinks showed me he simply was a kind, warm and loving person.

When I’d first gotten Brinks, my best friend saw the way the dog devoted himself to me, and how I basked in his constant and unconditional love.

She said, “You do know you’ll never find an actual human guy like that, right?”

But as I got to know the man I was dating, I was thrilled to realize she was wrong. I had.

When I married that man a few years later, both of our dogs not only attended the wedding, but they were in it. And now, twelve years after Brinks and I found each other and helped save one another, we are still happy and healthy. We are living in a household full of love.

He spends most of his days sleeping beside my desk as I work, his legs twitching in some glorious remembered run. His limbs have tremors in them, and I sit on the floor with him a few times a day and gently massage the trembling away.

I know that our time together is coming to a close.

And though it will be one of the hardest things I’ve ever had to go through — far harder than any breakup I’ve ever had — I wouldn’t trade one second of that coming pain not to have had the life I’ve shared with Brinks.

He didn’t just get me through a breakup, keep my house safe or provide companionship.

He came to me and taught me what it is to love completely and unstintingly. And he proceeded to change my life.

Phoebe Fox is the author of “The Breakup Doctor” and “Bedside Manners,” part of the “Breakup Doctor” series (from Henery Press.) You can find her at www.phoebefoxauthor.com, or on Twitter @PhoebeFoxAuthor.