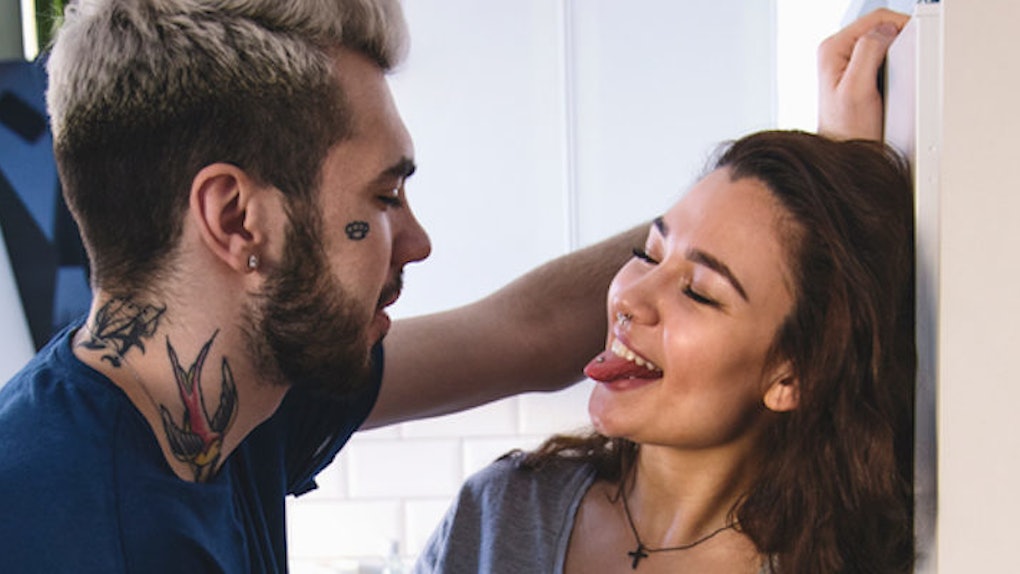 7 Tips To Surviving Your Girlfriend When She's On Her Period

Sometimes I'm an emotional bitch during my period. It happens. I'm even more emotional if I had a particularly rough month that month. It's like every negative feeling I internalize decides to release itself in a week-long bender of crying and lashing out and weeping at videos of puppies.

I'm also a bloated, disgusting mess. I feel sluggish and irritable. All I want to do is sit on my couch in my stretchiest pajama pants and watch bad rom coms without anyone coming anywhere near me.

I know I'm not supposed to admit this, but girls on their period really do become undesirable assholes. However, fear not! You CAN survive your girlfriend during period week!

OK, I say that in jest (in case you missed that earlier when you clicked on this). Having a period is not some weird anomaly that only happens to a small subset of diseased people. It happens to 50 percent of the human race. It's happening right now. Like, I'm due this week.

But I also know that periods really are a very foreign concept to dudes. I blame this on the fact that literally no female character in any TV/movie/advertisement is depicted as ever, ever, ever having a period. Ever. EVER. (Except when she's having a pregnancy scare.)

So you guys really have no clue what they're about at all. You live in a culture in which periods not only don't exist, but are seen as weird and shameful if they do.

As just one example of many, Instagram allows women to post explicit photos of their nearly naked bodies, but removed a photo of a fully clothed woman who put a photo up of her with her menstruating because it didn't follow "community guidelines."

Frankly, I am confused by this culture, as women (who, need I remind you, make up 50 percent of the global population) get a reminder every month that our periods exist and that we'd better be OK with them (even if Instagram isn't, apparently).

But you guys don't get these same reminders, in neither the media nor from your own body. So I understand that experiencing a person who actually gets her period is a whole new frontier for you.

Hence, you need me to give you some tips.

Truthfully, periods are hell, and period week does suck a lot of the time. Not the ENTIRE time, by the way. For 99 (okay, 90) percent of our period week, we women are healthy and capable of functioning as rational human beings whose hormones don't dictate our responses to our lives.

But sometimes our bodies get the better of us, and we behave like an [insert female stereotype here].

So here's what you can do to make your girlfriend's period week a bit more manageable for both you and her.

1. Never bring up the fact that she's on her period.

I wanna be able to admit my PMS gives me anxiety & an attitude w/o the chances of a guy throwing that in my face. Is that so much to ask? — Alexia LaFata (@alexialafata) December 7, 2015

I don't care what the situation is. I don't care if she's hungrier than normal and you want to make a light-hearted joke about it, if she's just not in the mood to do anything except watch Netflix on the couch and you want to go out, or if she's being really rude to you -- DO NOT, I repeat, DO NOT ask your girlfriend if she's acting this way because she has her period.

Attributing any of your girlfriend's emotions to the fact that she has her period dismisses the legitimacy of her feelings. It's saying, "These emotions you're having? Yeah, they're not real. They're just the hormones from your period."

And this is f*cked up. Because even if her emotions are "just" due to her period, that doesn't make them any less real to her.

Don't invalidate her feelings just because they stem from something that you as a man cannot experience.

Also, her emotions not necessarily due to her period anyway, because like I said, we are normal 90 percent of the time.

But on the off-chance that her emotions ARE due to her period, allow me to proceed.

2. Prepare to get snapped at for little to no reason.

She's spamming you with angry texts because you didn't get back to her in ten minutes. She's fuming at you because you don't have a garbage pail in your bathroom for her to throw her tampon in. She wants to punch you in the face because you didn't buy the right wine for dinner tonight. Why did your female coworker comment on your profile picture? Are you hooking up with her? F*ck you.

Yeah. These reactions, while they might seem insane and irrational to you, are very, very real to her. And keep in mind that everyone (even you!) has moments when they exhibit this kind of behavior, whether or not they are influenced by a period.

So my advice is to just respond to her how you normally would -- again, without mentioning her period.

If her behavior really was due to her period, she'll realize that soon and tell you so with an apology, at which point the only thing you should respond with is "It's okay," and a change of subject.

3. Let HER propose period sex. Not you.

But if she's comfortable having period sex, she'll propose it. And then you should totally be willing to try it! I'd say avoid it on period days 1-3 unless you want your dick to look like an extra in "The Texas Chainsaw Massacre," but you should be good to go on days 4 or 5.

But if she does not bring up period sex, do not bring it up. This is not the time for you to remind her about your untouched penis.

Every part of her body, from the physical to the psychological, is turning inside out in preparation for the birth of another human being. She's got it worse. So just accept that you won't be boning this week.

4. Never say, "But your mouth doesn't have its period!"

5. Indulge her weird food cravings with her.

If your girlfriend suddenly finds herself craving pounds of Mexican food and then a trip to a specific diner for a very very specific chocolate-covered dessert that she saw on Instagram and needs, like, right this second, you should help her indulge this craving. Take her to those places with a smile on your face and stuff your face with her.

Why doesn't she ask her girlfriends, you ask? Well, they will probably make her feel fat for wanting to do such a thing. You, on the other hand, are a man who is capable of eating just as much as she can during period week. She needs you here.

6. Buy her the goddamn tampons.

If you guys are hanging out in your sweats and she runs out of tampons and she asks you nicely to please go down to the store to buy her more, just do it. Literally just shut up and do it. The cashier knows they're not for you.

During period week (and even the week before sometimes), some women's boobs inflate. Some women start breaking out. I personally am a bloated mess whose stomach swells to two times its normal size. We all just look and feel uglier than we normally are.

The best thing you can do for your girlfriend during this time is make her feel sexy. Forget the food or tampons, even. If the extent of what you do is make her feel attractive and desirable when those are the last two ways she'd ever describe herself, you have won boyfriend of the year.