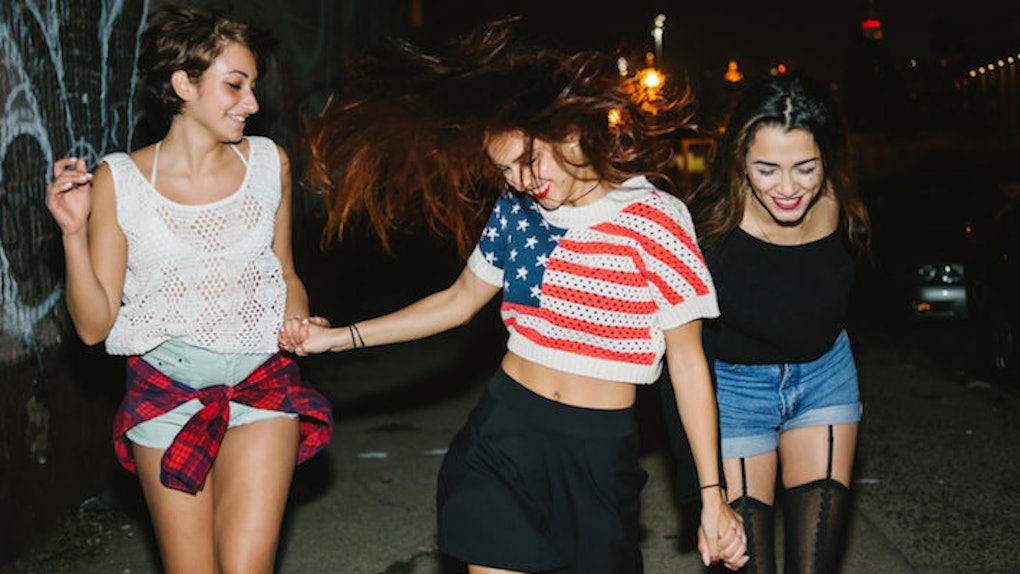 RIP Girls' Night: Why We Can't Go One Night Without Male Attention

It was a Saturday night, and I was spending it taking the town with my three best girlfriends, à la the leading ladies of "Sex and the City."

We seated ourselves at a bar, wasting no time throwing back tequila shots and preparing to gossip. As I got into a lengthy discussion about over-the-knee boots with my girls (albeit more of a one-sided one) I noticed something: My friends were frantically looking up and down and around the bar.

What are they looking for? I thought, following their gaze. Oh. Duh. As soon as I saw the men in suits coming through the revolving door and into the bar, it didn’t take a mad scientist to put two and two together: My friends were completely fixated on the trajectories of the men.

Not long after we became acquainted with our barstools, a guy in a navy suit and spotted tie approached us. He was either unhindered by lack of confidence or uninhibited from one too many scotch-and-sodas. Regardless, he made a beeline for

Ainsley, my strawberry-blonde beauty of a friend.

As Spotted-tie and Ainsley struck up a conversation about their overlapping interests in golden retrievers, the rest of us pressed through our own conversation without her. But our energy took a 180-degree turn, quickly dropping from vibrant to stagnant.

My one friend Patricia* slumped her shoulders, bowed her head and stuck her tail between her legs, so to speak. Yes, we had surrendered one of our soldiers to the enemy, but that didn't make it time to clear the battlegrounds.

“Guys,” Patricia started, impressively elongating her vowels the more she slurred through her tirade, “I really need to make out with someone tonight, or I’m gonna kill myself.”

"Relax, Patricia," I said in an ill-fated attempt to calm her down. I was disappointed in her. She was being a tad dramatic, and besides, that particular night wasn't intended for scouting men. It was intended for deep girl-talk.

But that night's breakdown of spirit wasn't an anomaly. Most nights that start with just us girls end up centering around guys. A night of the week that I've set aside specifically to catch up on my girlfriends' lives turns into a dog-eat-dog competition of who's hot enough to get the most phone numbers.

I mean, is it just me, or does every night out with your girls feel like nothing more than a way for you all to bide time until you're cuffed? Is "girls’ night" a lost art?!

We place our value on the attention we get (or don’t get) from a man.

It’s no secret that women have placed their worth in the eyes of men since the very beginning of time.

But the difference between then and now is that now, women have authority. Women can lead lives of passion, prowess and dedication outside of the home and through their carefully made choices.

So why are we still putting all of our happiness in the ways that men perceive us instead of in the conversations we're capable of having with our best girlfriends?

We still believe we aren’t capable of surviving without a man.

Somewhere in time (at perhaps one of our less admirable moments), we decided that even with our newfound power, we still simply couldn’t live without men.

And though I wished I meant that in a figurative sense, I unfortunately mean it in quite the literal sense.

Look, I love my friends. I’d go to the ends of the earth for them. And though I, like Patricia, am not impervious to letting a one-off pick-up get to me from time to time, I am also aware of the fact that on those occasions, my head’s in the wrong place on a girl’s night.

When I do reach that realization, I acknowledge I’m being an idiot, snap out of it and swear to myself never to feel bad about not being the “chosen” one -- the one to get hit on in a group of girls -- ever again. Ever.

We’ve changed our definition of “having fun” for the worse.

In middle school, “having fun” meant talking smack with my girls. But it seems that the older we’ve gotten -- and subsequently, the closer to “cuffing age” we've gotten -- “fun” has taken on a new meaning, a meaning I don’t support in any way: to end the night with a bang (okay, that’s meant to be taken literally AND figuratively).

The formula my girlfriends abide by is simple math, really: finding a cute guy + hooking up with said cute guy = a successful night.

The inverse is also true: not finding a cute guy - hooking up with anyone = a failure of a night. Yep, this is where we've placed our power: in the hands -- er, the lap -- of a ballsy dude.

And that’s the inherent problem: The idea that we need someone else to make us feel better about ourselves because ourselves (and our girlfriends, at that) are not enough.

By expecting to get hit on -- and brooding if, by chance, we don’t -- we remove the possibility to have a stress-free, fun evening entirely. We stifle our own pleasure by trying to find someone to validate us. See where I'm going with this?

We’ve forgotten the old adage of "hoes before bros."

It’s okay to want a man -- hell, it's more than okay. It's natural. Just don’t let what you want blind you from what you already have.