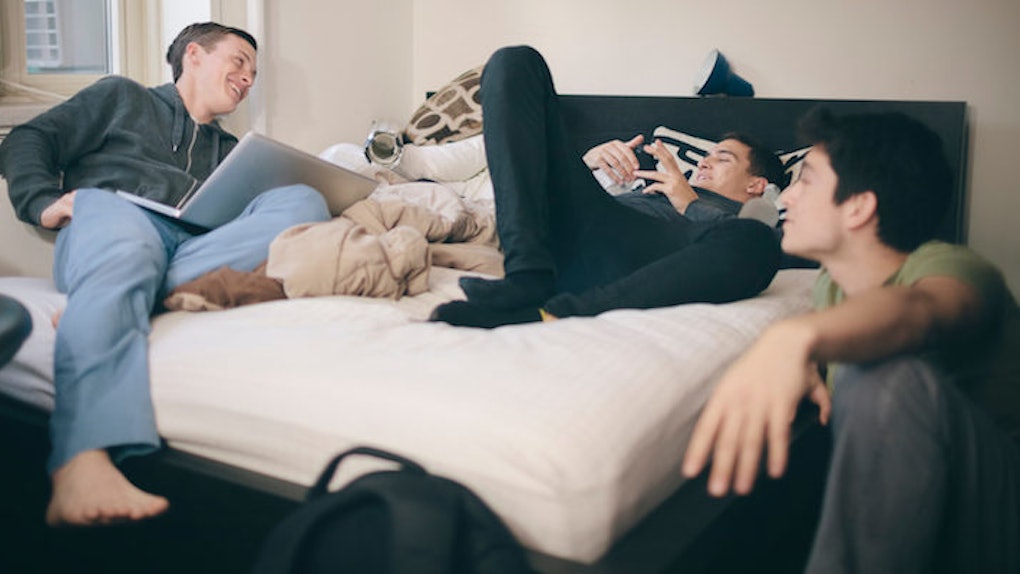 Why Friends Who Quote Movies Together Are Way Tighter

Back in high school, whenever my friend would utter those few words, I’d casually respond with: “The path of the righteous man is beset on all sides by the inequities of the selfish and the tyranny of evil men.”

And we’d go back and forth, trading memorized sentences, until I’d say “And I will strike down upon thee with great vengeance and furious anger those who attempt to poison and destroy my brothers,” and he’d close it out with, “And you will know my name is the Lord when I lay my vengeance upon thee."

If the text above sounds like Bible talk, that’s probably because it is. But it’s also an iconic scene from Quentin Tarantino’s iconic film, "Pulp Fiction." Had it solely been a line in the Bible, odds are, I probably wouldn’t have committed it to memory. I spent eight years going to “Sunday school” before my Confirmation, and I never memorized one line in the holy book.

And all of my friends are the same, too.

It’s funny, whenever we all gather around the television on a lazy Saturday morning, to watch a movie, we have to lay the “golden rule” down prior to starting the film: If you’ve seen the film, don’t quote it -- at least not while watching.

I mean, unless you’re familiar with the film -- or the quote, itself -- chronic quoters can get sort of irritating; take it from me, a semi-chronic quoter. Yet, for many of us, quoting movie lines can become something of a habit -- and a tough one to break, at that.

We say “How do you like them apples,” in Boston accents; “I’ll be back (bock),” like we’re the Terminator. We may quote Mr. Miyagi at various points of our work days. After a while, quoting popular movies can feel sort of instinctual.

I wondered why this was the case.

Well, Michael Friedman PhD., a clinical psychologist and member of the EHE International’s Medical Advisory Board, noted that many previously speculated that frequent movie quotes are a direct product of a difficulty in communicating -- typically seen in men.

Previous speculation believed that movie quoting arose from a fear of intimacy -- and a “retreat from expressing true feelings.” In other words, there’s a belief that people quoted things as a way to avoid revealing how they really feel, like maybe someone who felt anxious in a given situation would feel more comfortable quoting some movie that relates to anxiety rather than admit he or she felt apprehensive.

However, new research provides different rationale for why chronic quotes exist. In fact, an alternate theory suggests that when people are watching a movie together, they’re brain waves are “in sync.”

Therefore, by exchanging movie quotes with a friend -- and making use of a common conversational ground -- it’s “actually a sign of good communication,” as Friedman writes. And Alice Philipson expands on this premise in her article for the Telegraph.

Philipson quotes Averil Leimon, a former clinical psychologist, who claims "Quoting lines from a film is a quick and quite clever shorthand way for men to bond with people without achieving any intimacy at all."

Of course, the idea of men being shotty communicators has been brought back to the table, but -- like it or not -- there’s probably some truth attached to the sentiment. What Leimon means by that quote is that although there’s really no deep connection being shared between two people, when quoting movies together, there is, in fact, a bond being made.

And while men are oftentimes more likely to quote from movies when with their "boys," women have also been known to do the exact same among their friends, only more commonly using quotes from books, says Philipson.

So while you might not know where someone grew up -- or what his or her political views are -- after exchanging movie quotes with another person, you’re establishing the basic connection that you like the same movies, and they’ve resonated with you both in some manner.

So, if you and your mates are known to quote movies together all the time, it might actually be a sign of closeness between you all, as opposed to an indicator of all your shortcomings as communicators.

Granted, it’s not the most profound bond, but, still, it’s a bond.