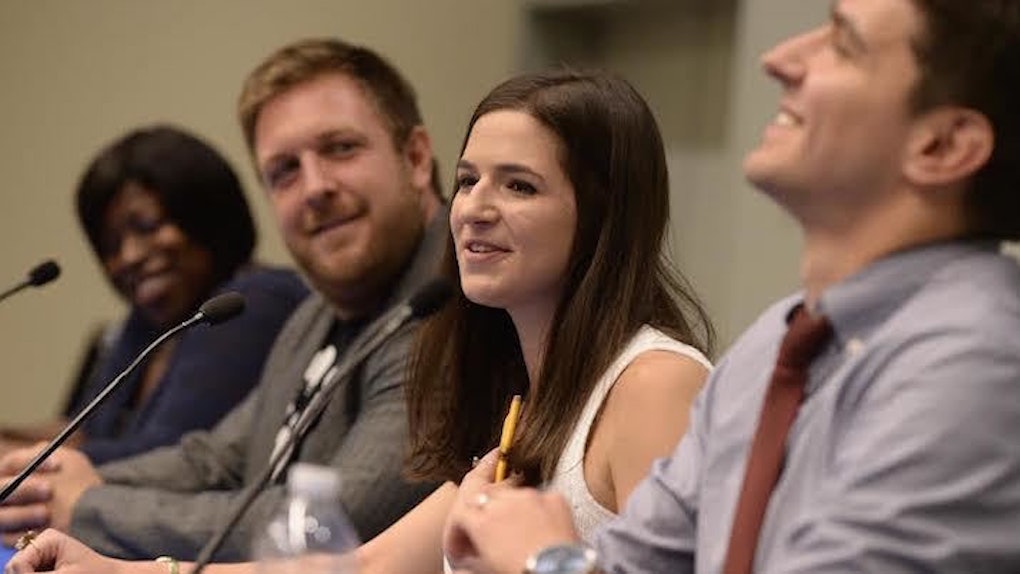 When I was in high school, Facebook was new.

There was a firewall that prevented you from using it on the school’s server, so in order to tag your friend in a “note” or “poke” your crush, you had to go through a shady CGI proxy service.

You were on a PC, and your grandmother sent daily "WARNING" emails about malware that would destroy your computer. With each popup, you were like, this is it.

Back then, social media (i.e. Facebook) was labeled a distraction.

"Nothing worthwhile can be gained from that thing," you were told by scowling teachers with PhDs in library sciences who were failing to make you appreciate the Dewey Decimal System.

Or maybe that was just me; I grew up very lucky.

Becoming a writer was the opposite. When I was doing my writer stuff, those same scowling teachers heaped praise. But they also warned me: "You’ll never make a living as a journalist."

Okay, back then you didn’t “go into media.” You were a journalist and/or a writer, and as a writer, your number one goal was to “get published.”

That meant selling something made of congealed tree pulp in a brick-and-mortar store.

It was notoriously hard to do that. You had to schmooze with the right people, scribble at a furious pace to produce work to show them and all the while, get paid nothing.

Not almost nothing – literally nothing.

At the same time, you felt terrified and out of your depth, like when I was 19 on the first day of my (unpaid, you know that story) internship at the hallowed magazine, The New Yorker.

I was scared silly. I thought if I so much as asked where the bathroom was, they’d discover I was a phony who couldn’t even get through "Moby Dick," and throw me out.

This is a factually true story. I took elevator trips to the lobby for nearly a month.

If I’d known what I do now, that first day would’ve looked very different.

Everyone was so fixated on how supposedly hard it was to be a writer, I nearly missed the point: In media, there’s a ton of opportunity right now.

The industry is changing, sure, but it’s changing in favor of young people with great ideas. One such idea is my company, Slant, a tech-forward, untraditional platform for telling stories about current events and culture.

On my short road to launching Slant, here are some truths about starting a career in media I wish I’d known from the beginning.

Are you impressed by names like The New Republic or National Journal?

You should be, because they’re publications with eminent histories of shaping how people in America think about the world around them.

But nothing in media is permanent. Every day brings a new example of how quality, on its own, isn’t a enough of a buoy for a media brand to survive the digital age.

That’s where you, the young social native, come in.

While it still looks great to have name-brand employers on your résumé, it’s more important to be scrappy about getting your work out there than it is to attach yourself to a name.

No name will be your life raft if you’re not producing great stuff.

The takeaway: It doesn’t matter who you are, or who’s granted you access to write on their platform; what matters is having an important story to tell and packaging it in a way that appeals to people scrolling through their phones.

2. They may need you more than you need them.

Felix Salmon, a financial journalist I'd generally trust to sound the alarm, once told an audience that journalism as a career might be over.

That’s a pretty serious thing to say. Basically, Salmon points out a 30-year career at a local daily paper now has the same market value as a three-week stint at BuzzFeed. Even if that’s an exaggeration, the point is loud and clear. I’ll admit I was a little scared.

But what if you flip the facts around?

If you think about it, an increasingly social and mobile media industry is providing more opportunities for young, diverse writers with powerful stories to tell -- the same people who used to perpetually get left out, back when establishment names and voices necessarily meant wider distribution.

That isn’t to say the success of young people rising in media must always come at the expense of talented writers, videographers, photographers, etc. with decades of experience under their belts.

It just means that there’s a new kind of opportunity for you, and also, a new challenge being leveled at older players who’ve gotten comfortable.

The fact that you have marketable skills is no reason to get cocky. When something happens at work that makes you feel valuable, redouble your humility.

There’s a lot of research coming out about the benefits of gratitude, but this isn’t just for your health. In a quickly changing industry, you never know where you’ll be in a year.

No task should be too small or unimportant. If you forget to floss – if you get careless and mess up the little things – no one’s going to allow you to tackle bigger things.

One great way to start getting careless and moody is to miss out on sleep, proper eating or exercise.

There’s no reason for you to be eating tons of sugar or sitting on your bum all day. Seven to eight hours of sleep are worth their weight in gold.

When I worked for Arianna Huffington, she had just published "Thrive," about how taking care of yourself makes you more productive.

Even as I helped with her book tour, I was a secret semi-nonbeliever, and in the early days of Slant, despite her warnings, managed to push myself toward burnout.

When I turned things around, I started doing better work. No matter what you do, you can’t “hack” sleep or food.

Every time you go to the dentist – assuming you do; side-eye at my twenty-something friends who are almost 30 and never go – she tells you to floss.

Then you go home and don’t.

After college I decided to actually start flossing every night. I can’t remember exactly why I decided to do it, but that’s consistent with a lot of research on habits. (I strongly recommend "The Power of Habit" by Charles Duhigg.)

But I realized flossing is a good metaphor for becoming mindful about the little stuff. Each tiny habit has an outsized impact on everything we do. Good habits are a way to prove you can take on new challenges.

Respect and gratitude are great habits to form.

So remember to schedule that late-night tweet maybe no one will see, fact-check when you’re 99 percent sure, copy-edit that TLDR piece to the very end and never have to be asked twice.