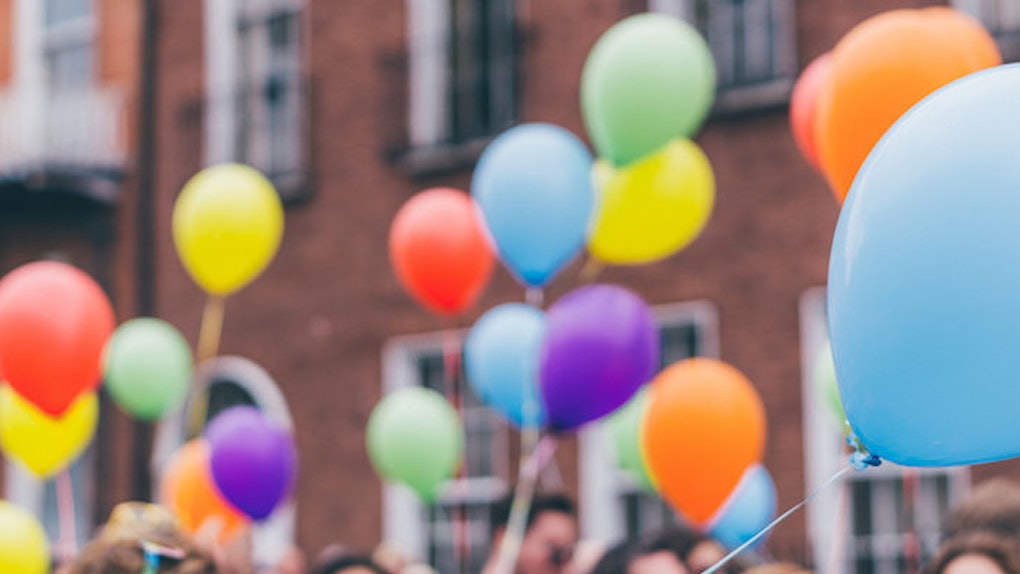 Oh, New York City Pride, you're the absolute sweetest. I adore you. I love you. You have all the ingredients that anyone with a keen palette would want to taste, right?

Sparkling, glittering parties, moonlit on Manhattan rooftops. Gorgeous men with visible abs cut from marble, strutting around the mean city streets shirtless, shamelessly showing off their perfectly sculpted Barry's Bootcamp bodies. Drag queens with intricately sequined outfits that glisten in the sunlight and eyelashes so long they appear to grace the top of the Chrysler building. Stunningly beautiful girls fervently kissing other stunningly beautiful girls without reservation or fear. Wild diversity as mixed and colorful as our lovely rainbow flag, herself.

Most pressingly: during Pride there is a feeling of reverent passion that permeates the polluted New York air and oh honey, it's intoxicating. You can get as high as the sky off the good vibrations of unity and togetherness, baby.

All of this juxtaposed against the backdrop of the most coveted city in the universe: New York City.

"I want to go to PRIDE!" a soft-spoken co-worker moaned to me a few years back. She pushed her blonde hair out of her baby blue eyes and looked wistfully into the static air of the office.

"Well GO, girl! Why don't you go!? Shit is FREE!" I chimed, as I feverishly banged on the keys of my laptop, hoping the harder I banged the quicker the right words would manifest on to the screen.

"Because it's GAY pride and I'm not gay. It's not my event," she prudishly answered, her doe eyes harshly critiquing her seemingly perfect manicure.

"It's actually for everyone. You're a LGBTQ ally, of course you can GO, girl. In fact you should go!" I purred, secretly hoping to corrupt some sheltered straight girl eyes (wicked, I know -- but we all have a past girl).

Did my pretty little coworker end up going? No, she didn't. You know why?

She told me the following Monday when I was nursing the worst hangover of my life (um, can the Monday after Pride please be a national day off? I mean, come on. We homos deal with a lot. Give us ONE DAY OFF to heal from that dire hangover. We've been persecuted since the beginning of time. Throw us a goddamn bone, ya know?), that she was scared to go to Pride because she didn't want to do something that might offend "us." She didn't want to make a fool of herself or say something that might make us notoriously opinionated gays "lash out."

And I don't blame her. We're a pretty loud crew. No one wants to piss off a queen, especially when she's holding court in her own palace.

However, we love and appreciate our heterosexual counterparts and Pride is for you too! If you have pride in my pride, well that's a real Pride party. And honestly, we need your straight support. Being queer can feel like you're living inside this isolating little bubble and it's nice when that bubble temporarily pops and we're all united as one force of human nature. It's nice to know you care.

However, here are some "do's" and "don'ts" to help ease your straight mind:

Don't: Come to our party and then not vote for our fundamental human rights.

You don't get to wave a flag around at our fabulous, glittering party if you don't believe in marriage equality.

DO: Use this as a chance to really let your freak flag fly.

You will never be in a group of less judgmental human beings than the gays. Now is the time to really take a fashion risk! That weird hat you've been afraid to rock -- now is the time to rock it, babe. Plus some bitchy boy will let you know real fast if it isn't working -- but his critique will be strictly loving.

Don't: Expect that everyone of the same gender is into you.

Ha, yeah, sorry frat boy. But you're not even in good enough shape for the gay boys to be checking your ass out.

DO: Allow yourself to be moved.

Don't think you're not allowed to cry, be moved, weep or feel incredibly passionate alongside the gays. Our passion is palpable and we want you to experience the queer magic with us.

I mean you're about to watch thousands of people celebrate their sexuality, something that they've been made to feel ashamed of for most of their lives. It's a beautiful thing. Feel it and don't be ashamed of feeling it. We want you to feel it.

Even if you hear the gay boys do it to each other, do NOT CALL A GUY, GIRL. You can't recklessly insert yourself into gay slang culture, just because you're at Pride, girl. Not everyone is cool with it and plus, we all have a mutual understanding and have cultivated a baseline of tolerance with one another.

Do: Be open about your sexuality.

Look, when you're at Pride, you're sort of on gay territory. It's okay, we're always on straight territory so the tables are just temporarily turned.

And these are the rules: when you're on gay territory, people might assume you're gay too. Don't let this jar you and don't play gay for the day. Be honest. Say "Thank you but I'm actually straight!" I do this shit in straight land all the time. It's easy!

Don't: Treat Pride like it's a trip to the zoo.

I get it. There is a LOT to take in at Pride. You might see something you have never seen before and some things you will never be able to unsee. Even I have to pick my jaw off the pavement a few times. But do NOT, I repeat, DO NOT treat Pride like it's another day at the Bronx Zoo. Don't gawk. Don't stare. Silently take it in, smile and move on.

Do: Remember you have reason to celebrate, too.

When we peel back the layers of sexuality, we're all freakin' humans, right? Pride is about celebrating every human being's fundamental right to love and live freely and that's a victory, not just for gaykind but for humankind. Dance like it's 1999 like the rest of us, baby.

Don't: Wear a stupid rainbow outfit, take pictures with your straight sorority sisters, take a tequila shot and dip out.

It's a cultural celebration of human sexuality, diversity, human rights and LOVE. It's Pride, not a pike tailgate.

We love some positive straight energy. Especially in light of the recent Orlando massacre. We need to know we have your support NOW, more than ever.

We need you out there, posting pictures, Instagramming, tweeting, WHATEVER. You being at Pride and showing the world that you support us queers sends a message to the hateful part of our world: I stand for human rights. So many claim to be for "gay rights" but are too afraid to be open about it, because they're afraid about alienating their hateful friends.

Kittens, we've recently seen how ugly and horrible hatred is, haven't we? Now is the time to bestow so much love into the gay world, that we drown out the devastating, dark sounds of hate.