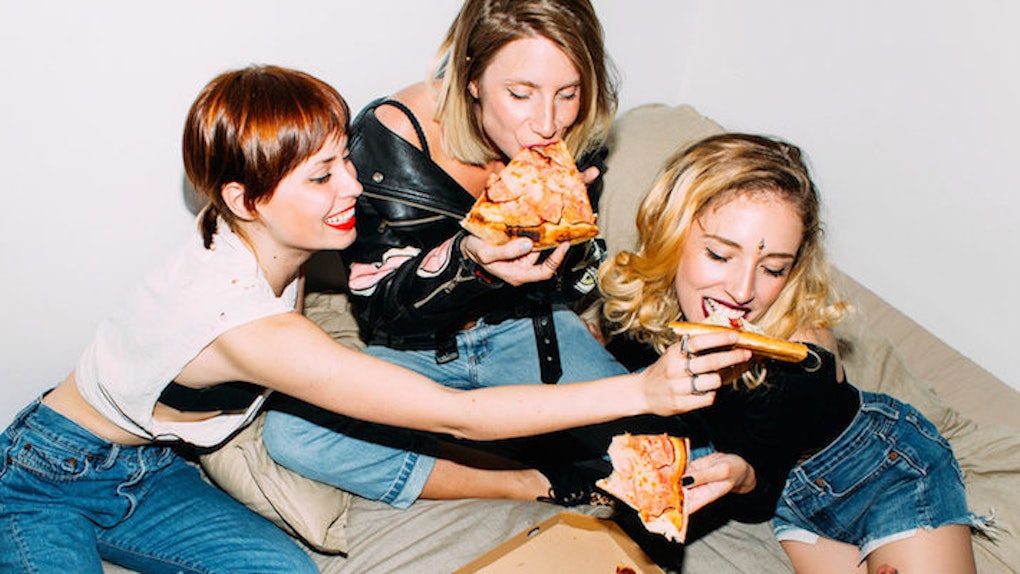 Science Explains How Eating Right Before Bed Can Cause Weight Gain

Imagine sitting down to a nice bacon, egg and cheese or a nice big burger with chips each night right before brushing your teeth and getting ready for bed. It really would eliminate any sleep-related problems this generation might be experiencing.

You could just fill up your stomach and enter a food coma until the next morning. Anyone who’s ever taken a nap after Thanksgiving dinner can verify that few things are more fulfilling than a nice sleep after a big meal.

So why not bump dinner to later in the day?

Well, for a few reasons. As Jennifer Van Allen writes for The Washington Post, it appears eating late could be particularly bad for weight control and diets, in general, among other things.

From a dietary standpoint, eating late can encourage weight gain more rapidly than food consumption during, let’s say, the mid-afternoon.

According to Kelly Allison of the University of Pennsylvania, “Studies tend to show that when food is consumed late at night -- anywhere from after dinner to outside a person’s typical sleep/wake cycle -- the body is more likely to store those calories as fat and gain weight rather than burn it as energy.”

For instance, if you had a bowl of cereal around midnight (à la Jerry Seinfeld), you will be far more likely to store the calories you ingested from that cereal as fat than you would if you were to have that bowl of cereal in the morning and then go about your day burning calories into energy.

Another theory supporting the negative side of late-night eating revolves around our own bodily rhythms. Like many other human functions, after years of conditioning, our bodies create a digestive rhythm to accompany our eating habits.

If you’re accustomed to eating breakfast between 9 and 10 am every morning, lunch around noon and dinner around 6 and 8 pm, your body will start to anticipate food around these times.

By interrupting your typical cycle and throwing in a meal around midnight or 2 am, your body will have a more difficult time burning those calories.

That said, the main question at hand is whether or not the timing of when you eat plays more of a role with regard to weight gain than other factors, such as how much or what you choose to eat.

In response, studies have been conducted to isolate the effect of timing on weight gain.

One study, a 2013 experiment referenced by Van Allen consisting of 420 obese test subjects, showed that the group of participants who ate before 3 pm lost more weight than the group who ate after 3 pm. Both test groups were following the same weight-loss program and “ate, slept and exercised the same.”

In further experiments, this same relationship (that later food consumption leads to increased weight gain) has been generally duplicated across the board.

“What’s more,” as Van Allen begins to explain, is “when the participants ate late, they couldn’t metabolize, or burn off, carbohydrates as well as when they ate earlier.” And this also led to a decreased glucose tolerance, which is a common precursor to diabetes.

So what’s next for the rest of us who enjoy a nice midnight snack before getting ready for bed? Well, apparently, it seems like we’re going to have to get adjusted to changing our eating habits.

In other words, let your biggest meal of the day come first, your second-biggest meal come second, and, for dinner, try to eat a little bit less. This technique is in line with the previous research on the subject, gradually decreasing your caloric intake throughout the day.

It could also be a good habit to pick up if you include the gym in your daily routine. By eating a large meal early in the day, you’ll have increased energy and nutrition to burn off later, when you decide to go for a run or lift some weights.

Making that transition to eating earlier in the day -- after you’ve been fostering the bad habit of eating late for quite some time -- might not be as easy as it sounds, especially if you hear your stomach growling at 11 pm each night and have been getting hunger pangs while you’re trying to count sheep.

To combat this -- try to eat earlier in the day. Instead of having one piece of toast with breakfast, have two.

With lunch, go back for a second serving. Add another small side to your dinner. Although this might not sound like a lot, these small adjustments will go a long way for your overall satiability.

Also, Van Allen recommends you don’t go about this cold turkey (and she’s not referring to the type you might find in the back of your fridge). Like any other type of habit, it’s only going to be more difficult to kick if you try to go about it too abruptly.

You’ll probably have to ease your stomach into the whole thing, so let it down gently.