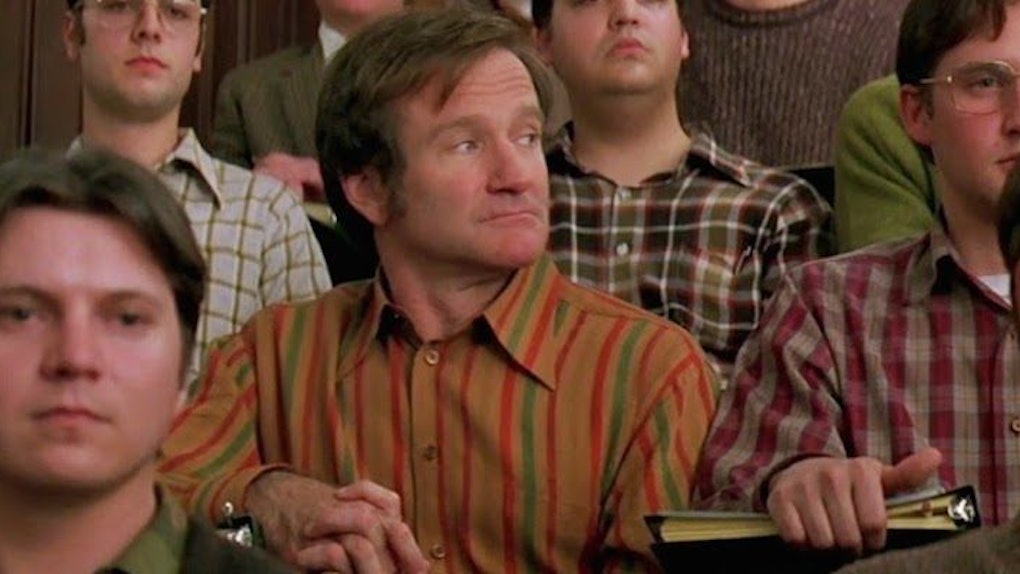 There's Pain In Laughter: Why The Funniest People Are Often The Saddest

They’re all brilliant and hilariously funny, but their humor came from a place of darkness.

All of the aforementioned have suffered through the devastating pitfalls of depression.

It was the day we heard that the brilliant and universally loved entity Robin Williams had taken his own life.

It was a painful sock in the gut felt by all.

It felt like the entire world stood still in a collective catatonic devastation.

Generations of people hailing from all across the great expanse of the universe were left gutted, mourning the loss of the man whose mind-blowing sense of humor and honest portrayal of humanity helped to raise us, lift us up when we felt stuck in the mud and whose onscreen presence forced our stubborn lips into the curve of an unabashed smile when we found ourselves reeling in the static of our darkest hour.

The day the planet lost Robin Williams left us in a cloud of wonder: How could someone who burned with such a bright, magnetic light be so heartbreakingly sad?

It forced me to look into the mirror of my own life:

My people are the fearless exhibitionists, the witty cynics and entertaining characters -- all of whom are overcome with an incessant, irrepressible impulse to perform to the room.

Give me the class clown over the popular kid any day of the week.

Whether it's my brother, my childhood best friend, my partner-in-crime or all my ex lovers, there is a common theme that takes residence within the soul of all the funny people in my life.

Once you scratch past the surface of wisecracks and wit, there exists a mountain of depression and anxiety.

For most, it’s a continuous battle, and comedy is the only relief.

So what’s it all about, Alfie? Why is there such a heavy, underlying, sweeping sense of sadness in comedy?

Why are those who are so seemingly full of life the ones who never fail to provide us with the perfect quip at the perfect time -- so heartbroken within?

What gives sad souls both the desire and the ability to make us laugh with such ferocity?

Comedy is derived from the truth

We deem things "funny" because they're true. Comedians and funny people alike have the ability point out the great truths of society and reflect them back to us in an entertaining way.

In a world overcome with heaps of falseness, simply hearing the truth serves as a well-needed dose of fresh air.

It's so liberating to actually hear the truth that it makes us shake with laughter.

Comedians are keyed into what's really going on in the world, which is a curse as much as it is a blessing. The world is a messed up place.

They are the hypersensitive observers in the world. They pay close attention. They're not blissfully ignorant, skipping about the earth’s surface adorned in rose-colored glasses.

They see what the average person can't see -- or rather doesn't care to see.

While we view the ability to be funny as a coveted quality we would do anything to possess, remember that funny people are as tapped into darkness as they are humor (usually they’re one in the same).

Being funny is being in control

Comedians understand no matter what great lengths we go to protect ourselves -- the masses will be always be horrendously cruel.

They will laugh at you and tirelessly make fun of you regardless, so why not gain some semblance of control over it?

See, when you’re making fun of yourself, you’re steering the ship. You’re no longer at the hands of the high school bullies or the slew of ignorant coworkers.

This is especially true of comedic performers, for they are allowing us to laugh at them in the most controlled setting possible: the stage.

Laughter takes the power back

So many comedians/funny people will tell you they grew up feeling hopelessly inadequate, hideously ugly, meekly small and direly insignificant.

These deep-rooted insecurities are what provided them with a die-hard desire and unrelenting ambition to be seen, respected and accepted by their peers.

Society will accept you for your flaws, so long as you’re funny.

Taking on the role as the class clown at school is the ultimate way for the incessantly bullied kid to gain popularity.

Laughing is the ultimate aphrodisiac, and we gravitate toward those who can make us feel good (regardless of how "weird" they are), right?

What's the best way to reclaim your power and gain recognition beyond being the school’s token punching bag?

To be funny is to be gifted. Humor is one of the most highly regarded forms of brilliance in the world.

A comedian’s brain works faster than the average brain -- it can almost be jarring to be around.

Have you ever seen the late Robin Williams' "Inside The Actors Studio" episode?

His unbelievably sharp tongue and hyper-creative mind is spinning so quickly -- even James Lipton struggles to keep up.

When you’re in the presence of a true comedic genius, you will find that before you’ve even processed what's happening before your eyes, the comedian has already come back with three witty retorts and two spot-on impressions.

When people are able to process the world before them at rapid-fire speed, it's subsequently hard to shut off the creative brain and unwind.

Being hyper-aware of everything all the time can be hopelessly exhausting and deeply unsettling.

It’s as easy for them to digest the negative energy as it is the positive energy -- for their brain is akin to a sponge soaking in both the sparkly suds and the dirt.

Which is why so many funny people are vulnerable to numbing themselves with substances, for they can put a halt to the never-ending stream of thoughts and ideas.

On the downside, however, substances can strip them of their creativity and burn out their brilliance.

It’s so sad our society puts so much shame around depression. Throughout history, brilliance has been synonymous with mental illness.

And so many of the brightest creatures have suffered in silence to their detriment.

People will hide the fact they’re feeling low before they hide so many other things that could be thought of as "shameful."

What is a more effective way to mask the fact that you’re feeling hopelessly, low, empty and sad than to crack jokes?

What better way to provide yourself with a quick fix to your impossibly deep sorrow than to orchestrate the twinkling sound of laughter in a otherwise silent room?

The effects of making another person laugh make you feel instantly better -- and the results are addictive. Sad people make careers out of making us laugh.

Connecting with an audience has healing power

Sadness is connected to feeling isolated. One of the worst parts of depression is the endlessly lingering sensation that you’re all alone in the depths of your despair.

That you're the only person who has ever felt the way you're feeling right now.

A comedian has learned that one of the ways to fill the black holes of depression -- is to connect. To talk about the pain and learn we're, indeed, not alone.

People who are funny fearlessly talk about their most embarrassing moments, shameful thoughts and hard-to-swallow realities of their lives; and we laugh.

We laugh because we can relate. By exposing the truth, they’re healing our pain as they heal they’re own.

Because in the moment a comedian tells us a joke or story -- we are less alone in our suffering and our peals of laughter provide them with direct validation that we've been there too.