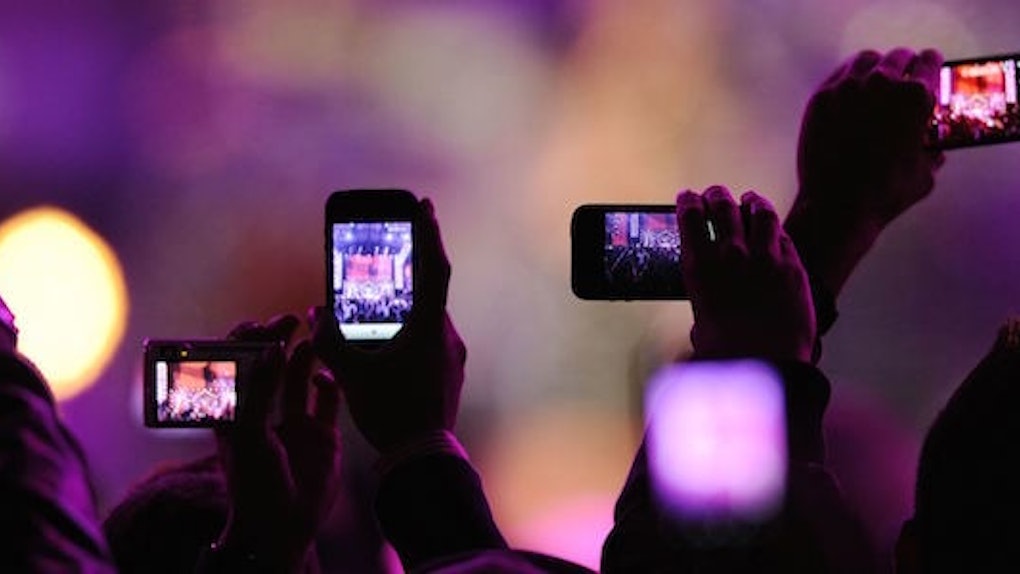 The first concert I ever attended was in 1999. I was a pube-free, 12-year-old assh*le with a backwards red hat, emulating Fred Durst and exuding pre-teen angst, thanks to my taste in music.

I looked at the Worcester Palladium mosh pit like it was certain death, like it was where to go if you wanted to kill or be killed.

I debated whether I should piss in the vomit-filled urinal or not. I wore my leather Korn bracelet and thought, "Surely nobody will fuck with me now." The one thing I didn't experience at the show is the (now ineluctable) sea of cell phones recording portions of the performance.

This is partially because 1999 was a transitional year for cell phones. Sure, certain business types had the Zack Morris cell phone for years, but it wasn’t nearly as common with the younger generation.

A couple of years later, I finally got a cell phone of my own. Though at that point, it was more of a portable machine for the game Snake, with emergency call capabilities. I certainly couldn’t record a video with it.

As time progressed, cell phones obviously morphed into the accustomed, must-have gadgets that they are today. And with that came the video-obsessed zombie concert culture we see at most shows.

As a constant concert attendee and supporter of a wide range of music, I am admittedly torn by this conundrum. Should we live in the moment, or should we record a portion of the show for future enjoyment?

Nothing makes me cringe more than when all I can see is the screen side of everyone’s cell phones, held in the air at full extent. At the same time, I’m here because I like this band, and I’d love to have a video to show friends. I might even want to toss one up on Instagram.

Does this make me a hypocrite, a part of the problem? Or, does my moderation justify such actions? After all, it’s not like I’m setting up a tripod and sitting at the bar during the entire show.

This isn’t just about my personal justification, though. Some people prefer to record the entire show. To me, that’s f*cking nonsense, but who am I to judge? He or she paid the same ticket price as everyone else, so is that justified?

There are certain factors to consider, one being the artist performing. I’ve heard a frontman once say, “Get those cell phones up. Record this sh*t, put it online, whatever the f*ck you want to do.”

I also watched Jack White jab at the audience exclaiming, “Put your f*cking cell phones down for five seconds.” Every artist is different.

Another factor is the venue or setting. If you’re doing it right, a rock show may be too rowdy to steadily hold a cell phone in the air. And in an intimate, acoustic setting, you don’t want to be holding your cell phone up like baby Simba while everyone else is cuddled up to an emo lover.

But what about a more mainstream artist in an arena or stadium? When 20,000 people are recording a hit song, it can be hard to keep one’s phone in the pocket.

You likely know someone who’s said “This is my sh*t” when the song has come on before. That person would probably love to see the video. It seems like a more reasonable time to join the masses and start filming, right?

In 2007, I saw Rage Against the Machine play their first East Coast show since their extended hiatus began in 2000. Of the nearly 500 shows I’ve seen, this was undoubtedly the best. People drove to New York City from all over the country to see this reunion.

Before the set started, I declared to friends, “I’m not recording any of this.” My mind was made up. I was perfectly f*cked up on weed and rum. I wanted to go crazy and enjoy this show without touching my phone once, and I did just that. In turn, it led to one of the best times of my life.

I bounced around the 40,000-person battlefield with reckless abandon, crashed into friends in the anarchy and grabbed onto them with the relief and amazement we were able to find each other.

It was truly one of the best times of my life. Was this because I didn’t use my cell phone for even so much as checking the time? At the time, I thought so.

As the years started to pass, the vivid memories of the show became cloudy. The aforementioned rum and an immense amount of weed possibly could have attributed to that. And, I couldn’t help but think to myself, “Man, I wish I had a video of that.”

It didn’t help that the band, which provided the soundtrack to this legendary occasion, went back into hiding, with no performance on the entire East Coast since.

And even as I sit here eight years later, I still ponder whether I made the right call. Would the best show of my life still have been as epic if I took a minute to record some of it?

Overthinking a simple thing like this leaves me hesitant to hold my cell phone up at shows, but sometimes, you just have to say f*ck it. If you want to record part of the show, go ahead.

If you want to mosh your dick off, feel free. If you want to sneak in a flask and flash your tits a few times, you go girl. Just try finding that balance between living in the now and having something for tomorrow.