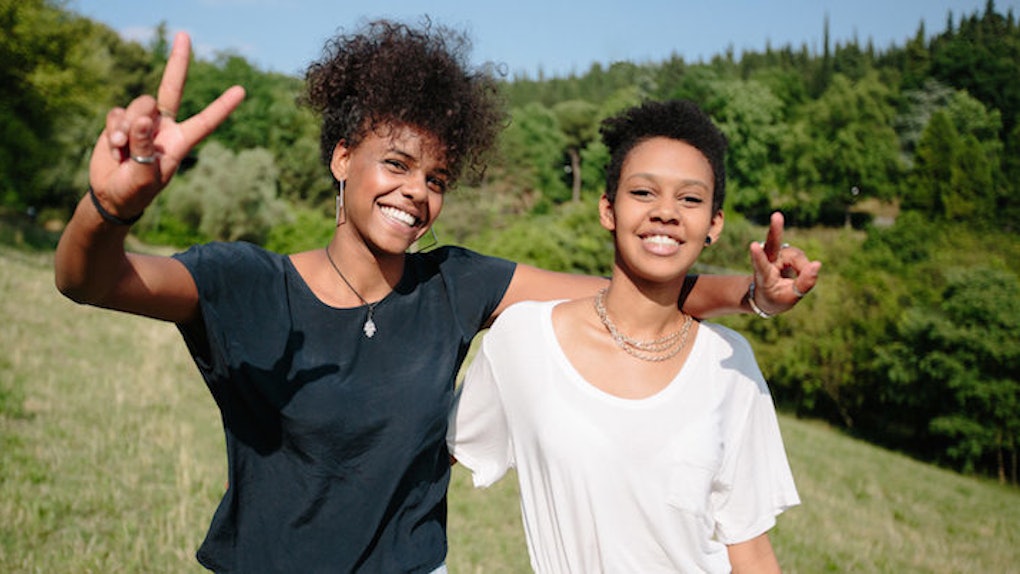 There is one person in the world who makes me smile and loves me unconditionally.

No, I’m not talking about a guy.

I’m talking about my sister.

No matter what you do, nothing can tear your relationship apart.

Growing up, however, I can confidently say without any hesitation my sister absolutely tortured me.

My sister would pinch me when I was sleeping in the crib and run away.

I’m pretty sure she tried to sell me when I was only a few months old.

Whether it was forcing me to mimic Beyoncé’s dance moves in front of her friends at every birthday party or tricking me into giving her back rubs for a dime, she really abused her power of being older and "wiser."

But now that I look back at it, she was really f*cking smart.

By making me stick around her and her friends, my sister effectively had her own personal assistant who was willing to do anything for her.

Most of the time, my sister would, quite literally, yell at me if I even breathed in her direction. But that would never stop me from following her everywhere she went.

I treated my sister like a queen, and she secretly loved it.

Despite having me bow to her every sisterly whim, she still took it upon herself to teach me lessons on the daily.

My sister was the OG hazer.

I was tested and tortured, just as a sorority pledge would be. But now, I’m blissfully happy and content with my relationship with my sister.

She is the greatest God-sent gift I could've ever "not" asked for in my life.

The unique aspect about my relationship with my sister is the fact I would absolutely relive every pained memory in a heartbeat just to spend more time with her.

So, for my sister and for every other sister out there, this one’s for you.

Here are the reasons why having an overbearing older sister is the best thing that could ever happen to you:

1. You're born with someone to guide you through life.

Your sister was born before you, so she can spend her life telling you what to do.

That’s it. Plain and simple.

It was her first job, and it will be her last.

What’s a life coach compared to your own sister?

Your sister has known you from the start, and the similarities you share give her psychic powers that will help you make the right choices before you've even had time to think about them.

To be honest, she’ll add in her two cents of advice, whether you like or not.

2. She’ll tell you the grown-up stuff your parents never explained.

When you’re 4 years old, watching "Pretty Woman" at 12 am, and you ask “What’s a prostitute?” she’ll explain.

3. She'll give it to you straight.

She's the one you'll text when you're questioning life and need a straight-up answer. She won't beat around the bush.

She is your person, whether you're aware of it or not.

She knows the good, the bad and the ugly parts of your life. But, she still loves you anyway.

You have been making a name for yourself from the second you were born.

Through your paths down self-discovery, you've been incessantly reminded of one thing: Your sister was here first, and she left huge shoes to fill.

Through every new school year, every new teacher and every new experience, you will be compared to her.

Whether she's working for "The Today Show," hanging out with celebrities or just living an all-around fabulous life, your sister will always be someone you look up to.

She’s the first person you want to make proud, and you always seek her approval.

5. She’s the responsible one.

She stops you from doing a lot of stupid things, but she will also tell you what she used to do, in order to lift your spirits when you inevitably screw up.

She leads by example.

Whenever you feel that foreign urge to start drinking, she'll be the one to tell you the fundamental rules of boozing: Beer before liquor, never sicker. Liquor before beer, you're in the clear.

She'll also be the first one to hysterically laugh at you the first time you wake up with a hangover.

Thanks for that one, sis.

6. She supports you unconditionally.

That cheerleader OMI is talking about is your sister.

No matter what you do, how badly you mess up or how embarrassing your general interactions with humans are, she will always defend you and tell you to keep going.

She empathizes with your shortcomings and mistakes because she's been there before.

She's been there, done that (probably twice).

Just trust her advice and support whenever it comes. Odds are, she knows what she's talking about.

7. She keeps you modest.

When you score that internship, hook up with the guy of your dreams or have a boss day, she’ll send you old pictures of yourself to remind you you aren’t all that.

No matter how high you climb the ego ladder, she'll be sure to cut you down a few notches.

Whatever happens in life, she’ll always have your back.

Sure, she's probably the person who gives you the urge to watch your back, but you wouldn't want it any other way.

(PS Phylicia, I would greatly appreciate getting the jeans I know you stole from me two Christmases ago back.

Also, thanks for the fake ID. It did me well this weekend.

Oh, and you are completely invaluable, irreplaceable and vital to my existence.)