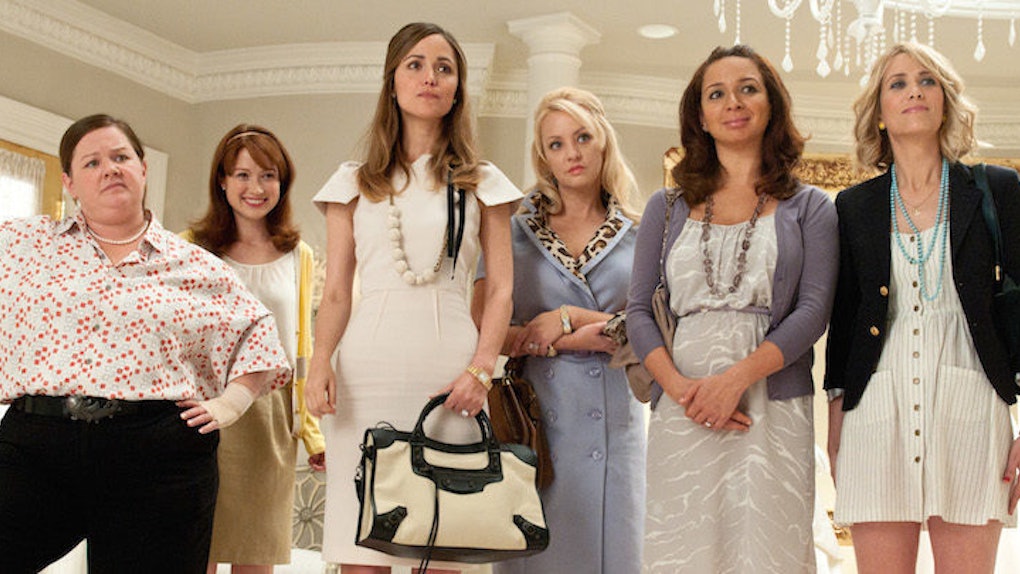 My friends are beautiful. They're the kind of women everyone stares at on the train because their bone structures are too perfect. They're the women who get free drinks from hopeful suitors.

I spent my entire college career nursing a drink by myself, while handsome men attempted to hit on my beautiful friends.

But, I never compared myself to them.

Well, I didn't until someone told me I was the "ugly friend."

I do know there are ugly, silly things we carry around inside us. They're the things someone said to us when we were 18 or 8, which can stick around for a lifetime.

The can seem so insignificant that we forget all about them, until 10 years later, we’re sitting in the movie theater by ourselves, weeping helplessly during a teenage movie called, “The Duff.”

When this boy told me I was the ugly friend, I scoffed it off. I didn’t cry or pout. I simply turned to another friend and said, “What a giant douche.”

And it was over. I grew up into a fairly confident, self-assured woman who believes she has a body men want to see naked.

Except, it wasn’t over.

Because that day, he had created the baby seed of a “hurt” plant that I unknowingly watered. It was buried so deep, I didn’t even know it was there, until I was compelled to see “The Duff” 10 years later.

“Duff” stands for Designated Ugly Fat Friend. The fact this word exists at all is proof humanity still has some growing up to do.

I can’t explain why I wanted to see the movie. It must have connected somewhere to the hidden hurt plant in my heart. I was so interested in seeing it that I went by myself.

I sat in the movie theater alone, eating popcorn. When the movie was over, I cried silent tears. And when everyone left, I cried noisily.

Then, I went to the bathroom and cried until my whole body was shaking, and I couldn’t cry any more. That dumb, stupid teen movie resonated on such an unfair level.

But even then, I didn’t understand the deeply planted seed of hurt. It wasn’t until four months later, when I was sitting in a taxicab, that I began to connect the dots.

I can’t explain why my mind began to wander the way it did to that movie, to the careless words of the boy who called me the ugly friend.

I remembered these things: I remembered being at a bachelorette party with four of my closest female friends. Each one was more beautiful than the last. (Though they would never admit it because they are also kind, smart, talented and humble women.)

A group of four men approached the five of us and started flirting. One of them was sitting across from my friend and me, talking equally to both of us when I thought, “He probably wishes he was just talking to her.” So, I got up and went to the bathroom.

I remembered when I moved to NYC, I had a strict rule I wouldn’t date anyone who hit on my roommate first. The night I met my handsome, talented boyfriend. He so attentively hit on me, and so intentionally ignored her.

Two years after we broke up, I was drunk one night and texted him, “Thank you for never hitting on Lindsay.” That’s how deeply buried and important that hurt plant had become.

And just like I did in the movie theater, I cried. I had caused so much useless suffering for myself.

Luckily, I also felt deep compassion for the young girl still finding her way and navigating this sometimes murky life. I decided to have a new thought.

I said it once more, three times more and then seven times more. I said it like it was some sort of pesticide that could kill the baby hurt seed planted so many years ago.

I said it like my life depended on it.

And maybe it did. Maybe future me needed to believe those words in order to go on and be a whole, loved human being.

That’s what I wish for you, too. Find your hurt seed.

Maybe an old girlfriend told you you weren’t good at giving massages. Or maybe a teacher placed you in a class below your learning level.

Maybe your brother told you your business idea was stupid, and maybe your boss implied you were failing. Maybe your well-intentioned friend joked about you being tall, slow, non-athletic or untalented.

Someone told you you weren’t good enough.

And subconsciously, on such a deep and bizarrely primal level, you agreed with the person. You planted a hurt seed that you’ve watered all these stupid years.

Dig deep, and grab that son of a bitch by its annoying, nasty roots. Claw at it like your life depends on it, like your future happiness depends on it.

Wedge your beautiful, nimble fingers below those ugly, twisted branches.

And then rip that motherf*cking hurt seed right out of your big, wonderful heart.