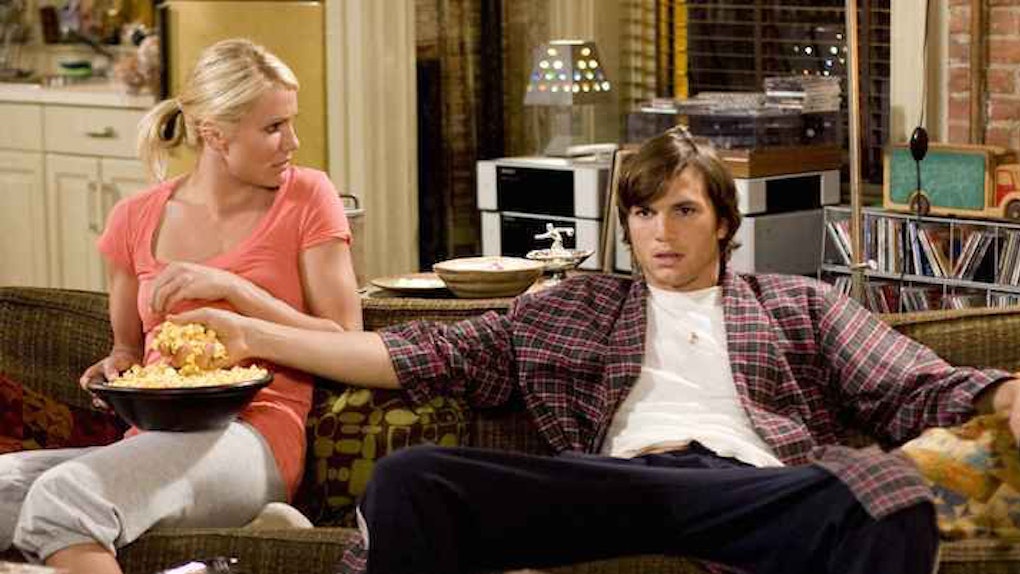 Boys Will Be Boys: 5 Side Effects Of Only Having Male Roommates

We've all laughed (and, let's face it, probably cried) along with Jess as she tries to navigate life with Nick, Schmidt, Winston and Coach, but we don't always see the reality of it.

Yes, "New Girl" is a scripted television show. And, yes, it includes some (very) extreme examples of living with boys.

But, the majority of the show is based on situations that occur regularly when you're a chick living in an apartment with a whole lot of dick.

I may not have found my male roommate by responding to an ad on Craigslist, but living with my older brother has given me plenty of insight into what it's like to be a real-life Jess. (Unfortunately, I don't have my own theme song yet. Stay tuned.)

Here are five things I've learned from living with a guy:

Houseguests of all shapes and sizes are welcome.

You better get used to sharing your bathroom, kitchen, living room and sometimes even your bedroom with unwelcome visitors.

These guests will think it's acceptable to eat your leftover food, sleep in your bed and soak in your bathtub, all without paying rent.

No, I'm not talking about the girls they bring home (although this is most likely true, too).

I'm referring to the ants, flies, centipedes, cockroaches, moths and other creepy-crawlies that probably moved in long before you.

Do you think your male roomies notice these squatters? Probably not.

But they sure will bug the hell out of you (no pun intended).

My first shopping trip after moving in? To the hardware store to build up my army against bugs.

I will show no mercy, so I bought both Raid Multi Insect Killer 7 and Raid Max Bug Barrier Defense Marker.

It's my own personal death serum, just like the one that Jeanine Matthews uses in the "Divergent" series — not even the divergent bugs, like Tris, will be able to resist it.

There must be fart-scented air freshener hiding somewhere.

I hate to break it to you, but no matter how many candles you light, fresheners you spray or waxes you melt, the fart smell will never go away.

Places that are inhabited by someone of the male species have so much flatulence floating through the air that there is no hope of it ever circulating its way out.

And eventually, you'll probably get used to the foul stench. Just remember when you invite people over, it'll invade their noses as soon as they open the door.

Another important tip to remember: If you see one of them heading toward the bathroom with an iPad, run as far away as you possibly can. I'm serious. Get out of there.

When they bring electronic devices with them, it means they'll be in there for a while.

Trust me, you will not want to be anywhere near the apartment when they decide to blow up the bathroom. (And if you are, you may want to stock up on nose plugs and Glade. You're gonna need it.)

The fridge looks like it belongs in a convenience store.

There will most likely be an entire shelf (or two) of beer, styrofoam containers filled with month-old takeout food and plenty of eggs and meat (because even guys who don't work out seem to make protein their biggest priority).

They'll stare at you wide-eyed when you stock the fridge with kale and grapefruit. Why?

Because they probably have no clue when they last ate fruits or vegetables.

On the plus side, the inability to cook is a male trait that goes in your favor. Why?

First of all, you don't have to worry about them eating your food. When I lived with eight other girls, there were always angry texts like, "WHO ATE MY CELERY?" or, "I'M MISSING AN AVOCADO!"

A bro would much rather eat his week-old mac and cheese than your fresh vegetables and homemade hummus.

And second? You are sure to have clean utensils every time you want to cook.

When you're the only one who uses the cookware, you won't come across rice cemented to the bottom of an improperly washed pot, or plates with some sort of crust stuck to them.

But, I will warn you, if they ever do decide to cook, open up all of the windows ahead of time.

It will probably just be mac and cheese or ramen noodles, but there's still a chance they'll ruin it.

If you prep properly ahead of time and get some air circulation going, when their dinner starts to burn, all the smoke will begin to filter out immediately.

You have to find somewhere else to watch "The Bachelorette" if a big game falls on a Monday night.

There are enough channels for them to always have some sports game they need to watch.

They may even argue that you can't watch "Dancing With The Stars" because there's very important polo match going on that they can't miss.

But then again, this may be another blessing in disguise. How?

Because if you've ever watched one of your favorite television shows with a guy, you know they'll do nothing but ruin it for you.

Unless you want to hear them whine about how reality TV is so scripted, and there's no way that they can fall in love that quickly, you're better off leaving the TV on ESPN.

The bathroom will never be clean.

You thought the worst part about sharing a bathroom with a guy is he'll always leave the toilet seat up? Ha, if only.

The worst part is your male roomie might as well be a shedding ape. Guys grow hair quicker than it takes me to get to work.

This rapid growth requires some of them to shave on the daily.

So, what's the big deal with that?

The big deal is boys are completely blind to the fact that they leave little tiny hairs all over the bathroom.

The sink, the shower, the floor, you name it; it's probably covered in (what you hope is facial) hair.

You can try and fight this one as much as you want, but there's no way around it.

The only way to have a clean, hairless bathroom? Make them shave outside.