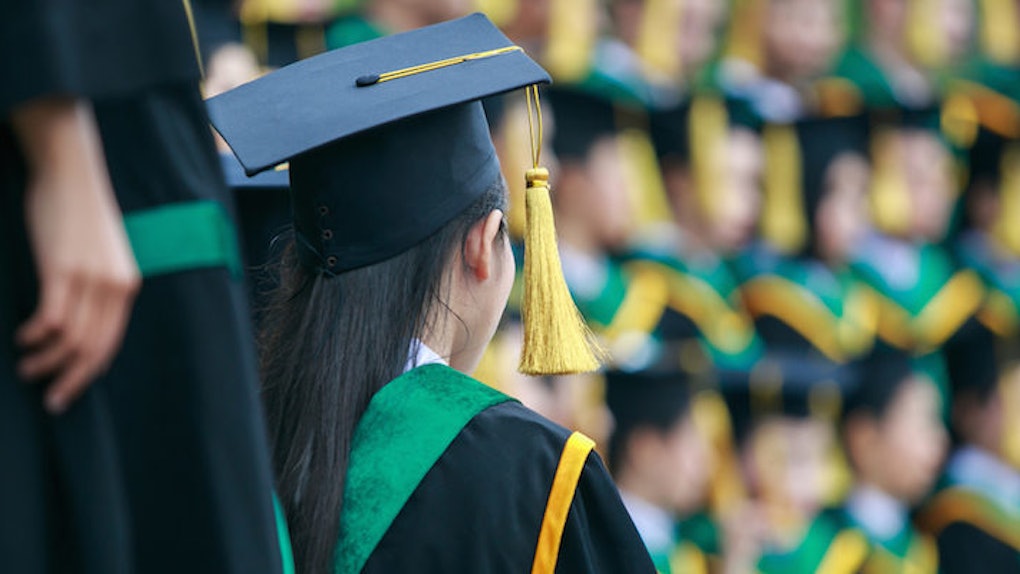 Let’s rewind to last May, when three people very close to me took part in the "G" word.

They did what was referred to as "the unspeakable," and left the rest of us there, trying to figure out how to process their absence.

When those individuals left, I thought the world was partially ending.

I couldn’t comprehend how I was supposed to get through my senior year without being able to include them in any of the memories I was making.

I was furious they got to just up and leave this place and all of those they cared about.

They could start over somewhere new. They got to go off and be adults, while here I was, trying to make it to my 8 am classes on time.

I didn’t want them to grow up and forget me. I wouldn’t even let that be an option.

So, I made myself unforgettable to them.

I constantly texted them random life updates, called them to rant about my current drama and sent them play-by-plays of my nights out through Snapchat.

I even made sure I tweeted how much I wished they were there on a weekly basis, just to be sure they knew they were missed.

I thought I was preserving our friendship as much as I could, despite them not being in the same city anymore.

That is, until I was the one who graduated.

I even got the Snapchats that outlined each night they went out.

At first, it was great. I felt like I was right there with them.

But soon enough, things got hard.

It got hard staying in on a Friday night and seeing all my friends at their annual toga party. It became difficult to scroll through Twitter and see inside jokes I no longer had the lowdown on.

The hardest part was the amount of guilt I felt. No one seemed to understand graduating wasn’t something I did to punish them. It was the inevitable next step.

I have to give them credit for their good intentions.

I did the same thing to those friends who graduated before me. But in some ways, it causes more harm than good.

I don’t need a daily update about the drama in the house I used to live in, or a Snapchat montage outlining a night out I wasn’t there for.

I don’t need the drunk tweets at 2 am, saying you wished I were there. Believe me, I wish I was there more than anything.

So, to all you folks who have friends who recently graduated: Moving away from all the people who gave you a lifetime of memories in four incredibly short years is a nearly impossible task.

But it has to be done, and it sucks. Trust me.

While telling us we’re missed is reassuring, it’s not necessary to constantly drag us back into the daily occurrences of college life.

We’re doing our best. We're trying to kick it with the adults and make a name for ourselves outside of the walls of our university.

Don’t make us feel bad for doing so.

We will always be there for you, but we don’t need the excessive reminders that we’re missing out on all your fun.

It’s frustrating we aren’t a part of the memories you’re in the process of making.

But those are for you, not for us. We have memories to last an eternity, and we wouldn’t change them for anything.

So go on and live out the remaining days of your college career to the fullest, and don’t worry about trying to prevent us from missing out.

We will be there when it counts, and we know you will be, too.

Just remember to support those of us venturing out as big kids. Be excited about the things we tell you, even when you don’t understand what they mean.

We’re trying our best to figure out this new chapter in our lives. We're trying to include you in our triumphs, no matter how small they might be.

This is the best way we know how.