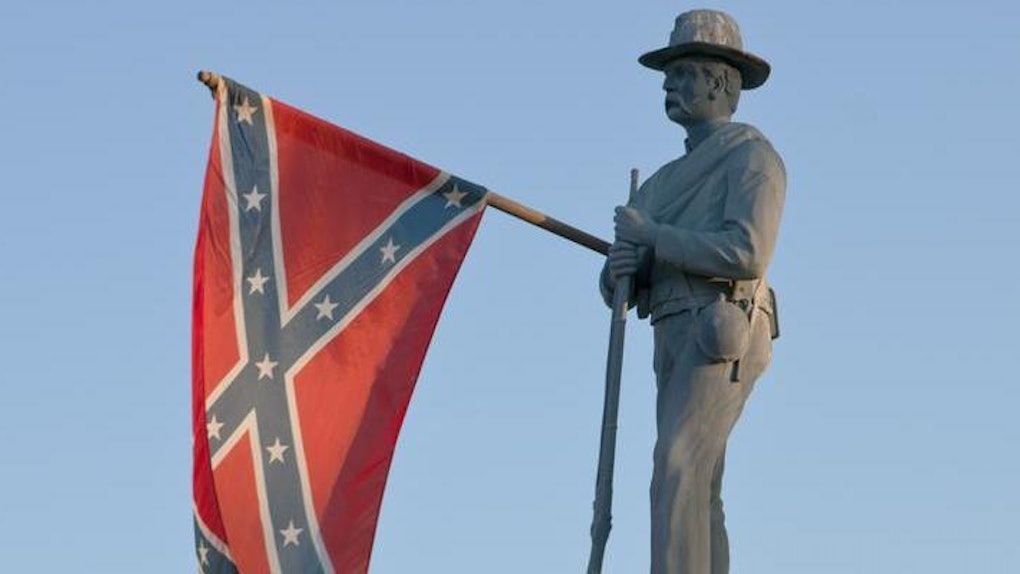 What A Black Texan Thinks Of The Confederate Flag

Allow me to begin by addressing the obvious retort, “Of course you feel that why, you’re a black girl living in the South.”

And it’s that very reason my voice should ring much louder over the conservatives attempting to preserve their “Southern pride,” and being outraged by the removal of the Confederate flag.

I know what it is like to drive through blue-collar neighborhoods while traveling, only to be met with a grimace and left with the view of the Confederate flag on a license plate.

I lived with the passed-down advice from elders to beware of those donning the flag in their yards, for it is another version of “No Blacks Allowed.”

I have endured the uncomfortable experience of walking into a suitor’s apartment to find his roommate’s Confederate flag framed above the fireplace, and said roommate in his bedroom with the door locked because he didn’t approve of his friend dating a black girl.

So, yes, perhaps it’s obvious a black woman living in the South applauded Walmart, Amazon, Sears and others when they became proactive to the painful increase in Confederate flag sales.

But, allow me to illustrate the less obvious pain we, as a race, have tried to dull over the past few centuries, and how this very flag is the wool being pulled over a nation’s eyes.

Just as the swastika has evolved into a universal symbol for anti-Semitism, the Confederate flag has been regarded for decades as a token of racist spirit.

Coveted by its owners as a memory of when blacks had little to no rights, the flag boasts a time when blacks were regarded as a lesser race.

Now more than ever, it is an emblem and ode to those committing (and getting away with) hate crimes.

The spike in flag sales comes shortly after a series of stabbing injustices and grief-ridden tragedies in the South.

The increase in sales proved many truths, namely that we have a long way to go before we can ever fathom the thought of raising the next generation in a post-racist society.

Just as Martin Luther King, Jr. and Rosa Parks took a step toward that dream, these companies have also taken steps to a picture of tolerance and acceptance.

To those who argue, “We should take down the gay pride flag too, since it offends Christians,” you’re comparing apples and oranges.

We can universally agree the majority of people associate the words “pride,” “progression,” “equality” when they consume the image of the rainbow-printed flag.

Of course, there is a fraction of people who regard the flag as “disgusting” or “gross,” but a straight Christian is not going to stick a rainbow flag in his or her yard to evoke that sense or feeling.

A racist, however, absolutely will wave a Confederate flag to silently scream the words, “Southern pride,” “n*ggers,” “hate” and “white supremacy.”

This is also not a “whites suck” manifesto.

I could not be more disappointed in my brothers and sisters for crowding streets and rioting when verdicts are read and guilty white men are let go.

What Amazon, Sears and Walmart did is a nod to the late civil rights leaders, and an example to the enraged black community.

You can make an impact without packing a punch; you can have a dream without acting like a nightmare.

I pray this progression can begin the healing process of a nation.

We claim to have a hunger for change, then we cannot become so inflammatory when people with power finally make a change.

This is not an act of taking away rights, my friends, this is the very act of giving back the rights and life to the countless, faceless, voiceless black men, both dead and alive.

If there is a reverse, this is only another battle won by the hate-filled and lost by the hopeful.