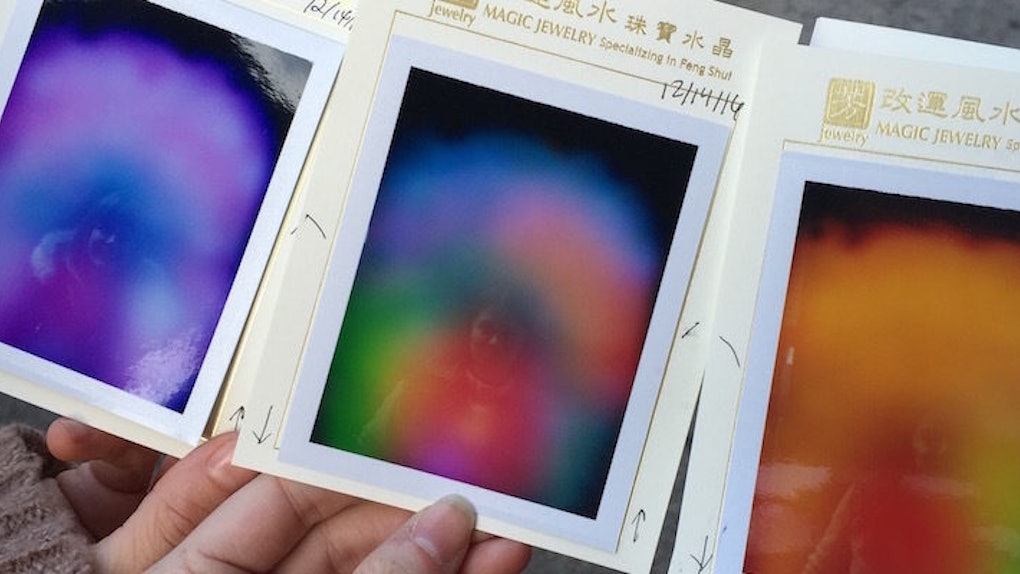 I Got My Aura Photographed, And It Was Accurate

I snuck out of work today.

Well, technically, I went on my lunch break.

But instead of going to the halal cart around the corner in the Flatiron District, I jumped on the subway and headed downtown to get my aura photographed.

I was a little concerned about the experience, not because I'm a stranger to the metaphysical, but because I hate Chinatown, and I didn't want that awful neighborhood turning my aura into some shitty-brown hue.

I barreled past hoards of people hawking fake Chanel handbags and tore my way down Canal Street into the fabled and mystical shop called Magic Jewelry.

Finding the place was like trying to solve a Rubik's Cube, but like most experiences in NYC, the best ones are always the hardest to find.

On the inside, the shop is underwhelming.

It's basically smaller than the entire bathroom in the lobby of the Plaza Hotel. (I know this because I use that bathroom whenever possible. It has beautiful, soft towels, and the toilet paper is like wiping your butt with a velvet rag.)

The nice lady at the counter showed me to the aura photography station, which looked a bit like a booth for passport photos, but with these weird boxes with metal fingerprints to place your hands on.

Apparently, the hand sensors are used to measure a person's energetic and auric qualities that are connected with certain parts of the body.

The Polaroid camera itself captures those spiritual fields around the body and displays them as a color field of light.

The experience of actually sitting for the photo made me weirdly nervous.

Maybe it was Chinatown or just the energy of the shop in general, which may or may not have been an undercover opium den or prostitution ring in the 1930s.

It took only a few moments for the photo to come out, and when it did, it was absolutely gorgeous.

Then came the fun part: the actual reading.

Most people get their auras photographed in order to gain clarity about how they're feeling in the moment and to learn how to channel their emotions into future actions.

She also explained your energy moves left to right, and your chakras (centers of energy within your body that emit the colors) change every 21 days.

After looking at my photograph, she said people with purple auras are highly psychic, attuned to the emotions and moods of others and very sensitive.

I feel like everyone is attuned to the emotions and moods of others if they're paying attention, so I let that go.

She also said people with purple auras don't have a whole lot of friends, but the friends they do have are held close and treated with respect, admiration and love.

They are unlucky in love, but once they have found their perfect soulmate, they're loyal and loving for life.

This is when the reading really started to click for me.

I have about two friends I could count as being ride-or-die, and they are the best.

Everyone else in my life I consider to be guilty until proven innocent because in the past, I've always chosen relationships with people who were terrible for me.

To describe my love life as "unlucky" is a generous understatement. Before meeting my current boyfriend, my love life was a gigantic trash fire.

I don't believe it's possible to meet your perfect soulmate, but I do think that if you work hard at understanding who you are, you can reach a place in your personal development that helps to make a relationship work.

They're attuned to animals and can sense their emotions and feelings. They tend to take in and care for strays, as their nature makes it difficult for them to turn strays away.

I live in a one-bedroom apartment in New York City, I have two rescue dogs that I got through volunteering with animal shelters and rescue organizations and I've fostered and found homes for over 10 dogs who now belong to my friends.

I bring my dog to work with me every single day, and I also own a cat that I rescued off the street when she was pregnant with seven kittens. (I also found homes for them.)

Overall, getting my aura photographed did give me some insight into who I am and what I want to do in the future. It also confirmed a few beliefs I've held about myself for some time.

So if you get a chance to get your aura photographed, go do it. It's only $20, and it's pretty damn cool.