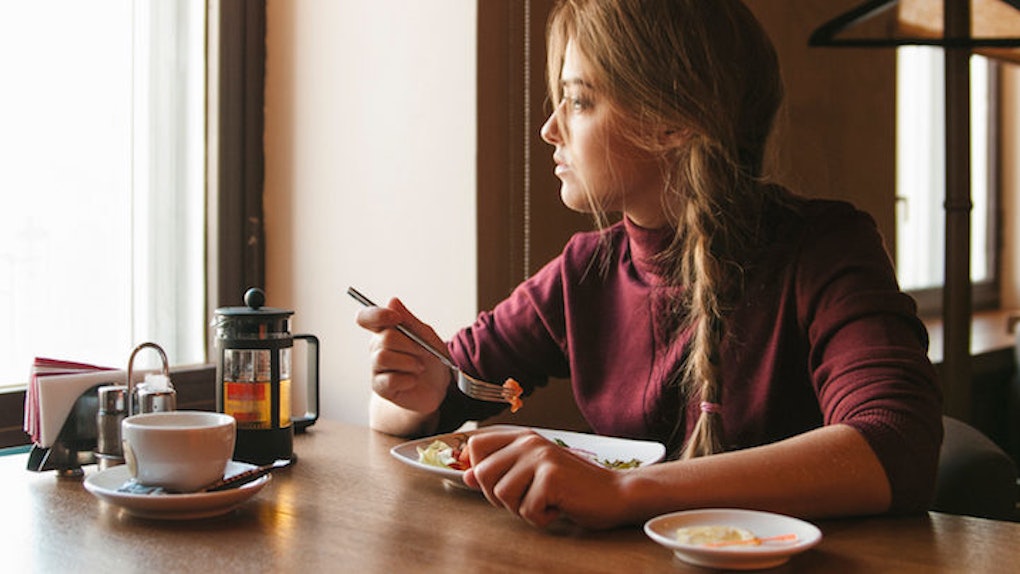 Orthorexia: 10 Facts You Didn't Know About The 'Other' Eating Disorder

Before I came forward on my blog, The Balanced Blonde (formerly The Blonde Vegan), about my struggle with orthorexia, I had no idea the disorder was such a little-known phenomenon.

I discovered orthorexia when I was frantically searching the web one night, to see if anyone else felt the way I did when it came to food fears and obsessions with health, dietary labels and restrictions.

Eventually, I found the Wikipedia definition of orthorexia that wound up quite swiftly changing my life.

To give you a little glimpse into the struggles I was facing that led me to that late-night Internet search, I was completely confined by my dietary label of veganism, obsessive about healthy, pure, clean food from the earth, and incredibly fearful about any food that didn't fall under those categories.

Now, a year and a half later, a lot has changed. I've written a book about my transition from veganism and my orthorexia recovery, "Breaking Vegan," which will hit shelves this November.

I also write about eating disorder recovery on my blog now, and have had the opportunity to connect with people all over the world who are also suffering.

Hearing their stories and having that support system has helped me greatly, and I feel very lucky to have a platform where I am able to connect and communicate with people who understand.

Because of the amount of questions and confusion I get about orthorexia on a daily basis (I get it: It can be confusing before you learn about it!), I have put together this handy YouTube video to answer the most commonly asked questions.

The video is titled, "10 Things You Should Know About Orthorexia," and I hope it sheds some light on the disorder for you. If you are suffering from orthorexia, or know someone who is, you are not alone.

There is help out there, and there is a beautiful light at the end of the tunnel. It's all about recognizing the problem so you can start to heal from the inside out.

10 Things You Should Know About Orthorexia

1. Orthorexia is a serious disorder, and indicates an unhealthy obsession with “correct diet.” The term was coined in 1996 by Dr. Steven Bratman, and many experts are working on getting it officially recognized by the Diagnostic and Statistical Manual of Mental Disorders.

2. The disorder is often brought on or triggered by restrictive dietary theories, as part of a lifestyle almost singularly focused on health.

3. Behaviors to look out for are anything extreme when it comes to diet. Clean eating, pure foods, veganism, raw foods, paleo and so on are all perfectly fine (and healthy) lifestyles to follow; it’s only when such diets are taken too far that there may be cause for concern.

This includes, but is not limited to severe restriction of calories, fear and anxiety regarding “impure” or “off-limit” foods, and a near-constant focus on diet and health.

4. Orthorexia is not about saying that any one diet is wrong or right, it’s about the fact that some people take their dietary theories to unhealthy extremes. We must accept that everyone is different and allow room for that.

5. Orthorexia is occasionally intertwined with elements of other eating disorders, such as anorexia, binge-eating, bulimia and more, but it certainly doesn't have to be. It often stands on its own as well, and can develop over years or even months.

6. It can be as hard for a person with orthorexia to relax about diet as it is for an addict to give up drugs or alcohol. One of the signs that orthorexia is present is when the dietary theory followed by someone takes on a life of its own. Even if a person wants to lighten up and “eat more protein,” for example, he or she may feel unable to do so.

7. Many people with orthorexia also go to extremes with exercise, not necessarily to lose weight, but in a quest to optimize their health.

Athletes may develop orthorexia in a quest for optimum sports performance, only to find they have become entrapped in a restrictive dietary theory that impairs their performance.

8. The effects of orthorexia can range from person to person. I lost my period, developed several nutritional deficiencies, had bacterial overgrowths, lost my digestive enzymes and have had to work extremely hard to get back to health again in many ways.

9. Orthorexia can affect anyone. Teenage girls, especially vegans, are particularly susceptible, but the disorder has no one “type” of sufferer.

Some naysayers may classify it as a “first world problem,” meaning it is a problem that only afflicts a certain socio-economic group. But it is important to remember that everyone has his or her own journey, and the struggle can develop into a life-threatening disorder, which must be taken seriously.

10. There is no one diet that is the healthiest under the sun, and don’t let anyone’s “research” trick you into thinking that. Everybody is different, and what works for one may not work for another.

Orthorexia awareness is not synonymous at all with “anti-health,” but with balance. Many people who recover from orthorexia are still passionate about health, and because of what they've been through, are able to exercise that passion in a truly healthy and balanced way.

Recovering from orthorexia, although it’s a tough road, is actually a beautiful journey toward self-discovery, growth, personal progress, compassion for others and for yourself and a true way to get to know your body from the inside out.

For more information on orthorexia and to read my full story, go here to purchase my orthorexia memoir, "Breaking Vegan."