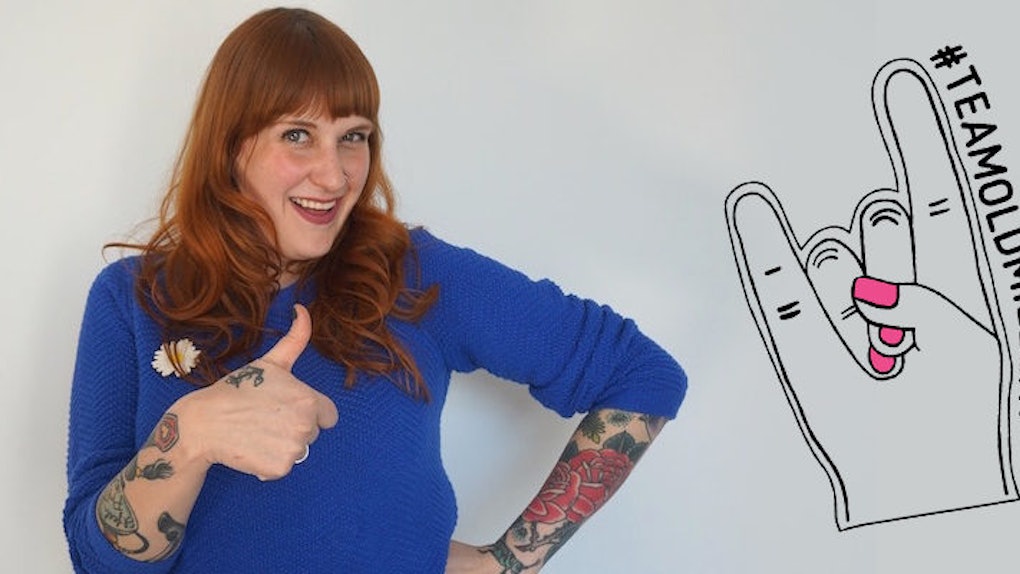 I didn't know I was a Millennial before coming to work at Elite Daily.

Like a lot of people, I thought of Millennials as primarily 20-somethings, which the majority of my Millennial co-workers and employees are. But the most common definition actually puts Millennials, or Generation Y, between 18 and 33. At 32, I just barely fit into the Millennial demo, although I've seen the demo defined widely enough to include people born in 1979.

Plus, I took this "How Millennial Are You?" quiz from the Pew Report and came up 99-percent Millennial for doing things like sending more than 50 daily text messages and having a nose ring. And I definitely don't identify as a member of Generation X, the next generation up.

The designation of Millennial, however, covers a sort of absurd swath of a very diverse population. This results in a weird gray area for those of us born in the early 80s, where it feels like we're sort of trapped between generations.

There are big differences between my life experiences and those of a 22-year-old, especially when it comes to technological advances.

I'm part of the last generation to remember life before the Internet. My 4-year-old son doesn't even know what a phone with a receiver looks like. (Being a mom is also like an automatic +5 when it comes to emotional age.)

As I keep reminding my co-workers when I overhear them referring to people in their early 30s as "sooooo old," in most parts of the world that aren't college campuses or my office, 32 is actually considered young. I swear! It's true!

But I've never felt as old in my life as I did my first week at my new job, where some of the stark differences between me and an early 20-something quickly became clear. Like on my first day, when someone made a Lou Reed reference, and literally not a single other person in the room knew who that was.

Obviously, for every one of these generalizations there are plenty of exceptions, and in my opinion, none of these differences are good or bad; they're just differences. And they make sense in the context of our different experiences and especially the extreme technological changes over the past few decades.

Disclaimer aside, here are just a few of the divisions between older and younger Millennials that have become increasingly apparent to me.

Adjusting to the office culture of a Millennial workplace was harder than I expected, largely because many of the actual tools and systems in place are different from what I'm used to. And I've long worked exclusively for digital properties and start-ups where you'd be hard-pressed to find a pen or piece of paper on the supply shelf.

But I was still stymied when a senior editor here responded to my announcement that I would send an email with an "I wouldn't bother."

"People don't really respond to emails here," she said. Instead, the messaging app Slack trumps email 90 percent of the time. At first, keeping up with the steady influx of messages was overwhelming, but I've since adjusted and actually find it fun to use.

However, I still find the lack of a permanent record inconvenient for saving and often-important recalling information. And I stick to my "old" ways when I need to send a lot of information. My lengthy emails detailing the difference between a topic and an angle or my extensive notes on voice just don't make sense to shove into a messaging app.

My early question about how to connect to a printer were also met with blank stares. There is one, but most of my employees have never needed to use it.

Despite the adjustment period, I am glad that I am being introduced to new technology and processes that will likely only become essential in years to come.

2. I use technology differently in general.

At one point, I had a discussion with my 22-year-old co-worker Alexia about what she would do if she couldn't use any pre-Millennial technology for the day.

"I only have Netflix," she said.

You can see where this is going -- she had only Spotify and iTunes. She didn't have an alarm clock, either, so without her iPhone, she'd likely be late to work.

I, on the other hand, have shelves full of paper books, and I refuse to switch to a Kindle despite knowing it's surely more convenient. I still need the weight of an actual book in my hands. And the smell -- I crave that real-book smell.

I also have an alarm clock with a radio (although I also use my iPhone to wake up each morning) and a few shelves of DVDs, although I admittedly bought most of them in high school. I also really really prefer to watch TV on my TV, not a laptop, which is why I have a full cable package in addition to Netflix and Amazon Prime. I'm pretty sure there's still a box of CDs kicking around from the same time as my DVD purchases, too. Alexia doesn't have any of that "leftover" technology, because it was all pretty much obsolete by the time she started purchasing media.

Also, while most Millennials (and baby boomers) use social media, there seems to currently be a big dividing line when it comes to Venmo and Snapchat. As a generalization, younger Millennials use them and older Millennials don't. Everybody uses Facebook, Twitter and Instagram (including, like, your grandma).

3. I have different pop culture nostalgia.

If there's one thing I've learned working at a Millennial website, it's the Millennials f*cking love "Full House." Seriously, they are INTO that sh*t. Their TV nostalgia is for Disney shows I can barely describe like "Lizzie McGuire" and "Even Stevens." They lusted after 'N Sync and 98 Degrees instead of New Kids on the Block.

(Fun fact: I once slept with a member of 98 Degrees, but not while they were famous.)

They have fond memories of Harry Potter midnight release parties, while I was a surly teenager when the first book was released in the US. (I still read them; I'm not a monster. I just don't have the same level of childlike wonder when it comes to the ol' HP. I was also raised as a Southern Baptist in the middle of the Bible Belt and we weren't really allowed to dabble in boy wizardry.)

No, my nostalgia show of choice is more likely to be "Saved by the Bell," and I cut my literary teeth on "Sweet Valley High" and "The Babysitters' Club." I reminisce more about "Clueless" (and how dreeeamy Paul Rudd was) than "Mean Girls." I drooled over Devon Sawa and Jonathan Taylor Thomas, not Aaron Carter and the cast of "One Tree Hill."

4. I (sometimes) have more cultural literacy.

Aside from having different pop culture references, one thing that came up from a lot of people when I asked about differences between older and younger Millennials was that many YMs seem to have less cultural awareness in general about things that happened before they were born.

I've worked with a lot of young Millennials, especially in fashion and beauty, who were extremely culturally aware and can make references from decades ago. But at my Millennial office, I've definitely come across a lot of blank faces when I mention a person or pop culture phenomena from before, say, the early '90s.

I don't think this reflects negatively on young Millennials at all. In fact, if you look at the world they've grown up in, it makes perfect sense.

They didn't have the experience of wandering around Blockbuster Video or Tower Records and just coming across stuff that looked cool. (In fact, Alexia -- again, 22 -- told me recently that the idea of browsing CDs in a brick-and-mortar store sounded like something "from 100 years ago" to her.)

When they want to watch or listen to something, they find it through targeted searches that take them to exactly what they're looking for. And they have so many options for finding current entertainment -- there's regular TV, acclaimed cable series, Netflix, Amazon, Hulu, iTunes, Spotify, etc. They don't have to go rooting around in the past for stuff to get into.

5. I use different slang.

Some other terms that I've never heard used so much in my life before spending my days with young Millennials: "f*ckboys," "low-key," "lit," "AF." Seriously, I have never heard so much about "f*ckboys" in my life.

For my part, I once used the prefix "cyber," and Alexia laughed for like 20 minutes.

These days, I just date my fiancé. But I met him on OKCupid, which my younger Millennial co-workers wouldn't consider using because they prefer the experience of dating apps like Tinder, Hinge and Bumble. All the younger Millennials at the office seem to date exclusively using apps -- and to have several downloaded on their phone.

Plenty of older Millennials use dating apps. But the one time I tried Tinder, I deleted it within a day. Because not only was I creeped out by seeing people I was connected to in real life, it also felt so robotic and soulless to me to connect with someone based purely on the fact that you like his or her face.

It's that very aspect that Alexia finds to be more authentic, since you're receiving the same basic amounts of information you would if you met someone out at a bar. The idea of a full profile on a site like OKCupid or Nerve Personals (which I used a decade ago and she's probably never heard of) seems like "too much" to her. To me, it's necessary to gauge compatibility.

7. I remember life before the Internet.

This is the major divide between younger and older Millennials that all other differences spring from in my opinion. I mean, some younger Millennials hazily remember pre-Internet and early Internet life, but I really lived that sh*t. I remember the distinctive tone of a dial-up modem and when Prodigy charged by the hour. I remember Geocities sites made up of flashing GIFs and making friends in chat rooms by starting conversations with "a/s/l"?

Hell, I remember life before cell phones. I remember when, if you were running late somewhere, you just had to hope your friend waited around for you. I remember looking up movie times in the newspaper and calling "Time and Temperature" to check the weather. I remember T-9 texting.

But considering my kid's first instinct as a toddler was to try to use the television like a touch-screen, these younger Millennials have no idea what's coming for them with the next generation. In the meantime, I just remind them to be glad that I don't need them to log me into all my tabs every morning or bring me printouts for editing like some of the Baby Boomer bosses I've had.

I'll leave you with some classic early Internet chatroom speak: ~presses play button on boombox, "Circle of Life" blares out~.