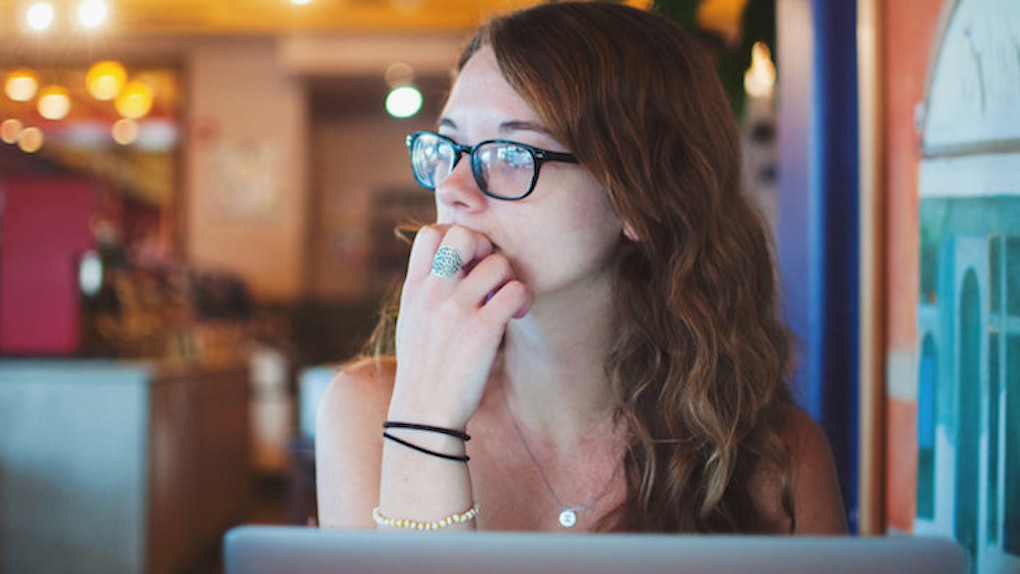 Why A College Degree Isn't A Ticket To Mastering Adulthood

I was always under the assumption that after graduating from college, I would officially be a grown up.

I would be confident.

I would be powerful.

I would have my life under control.

I would stop spending money on frivolous things just because they were pretty (looking at you, tiny measuring cups shaped like hedgehogs).

Here I am, a year and half out of college, and I eat cereal for dinner on a frequent basis and still sleep with a stuffed animal.

If my checking account could talk, it would beg me to stop buying random stuff from Target.

In the past year, I’ve thrown up on myself while going 75 on the highway, blotted my lipstick with a tissue I’d just blown my nose in and accidentally made an obscene hand gesture at one of my male coworkers.

While rifling through my purse this morning, I found a used Disney princess Band-Aid, Taylor Swift's "Red" CD, a ticket stub from "Magic Mike XXL" and a container of rainbow sprinkles.

Those purse contents do a fine job of representing my desperation, loneliness and the confusion I currently have about where my life is headed.

To give myself some credit, I’m not a total disaster.

I pay bills on time, live on my own, hold down a full-time job and shower daily.

I am healthy and have great friends and family.

Sometimes I even trick myself into thinking I am.

But then, I do something like unleash a violent torrent of tears while listening to “Landslide” on repeat as I drive back to the office after lunch.

That would have been totally acceptable if I was the lead actress in a poorly written Lifetime movie, which, alas, I was not.

The good news is it was the Fleetwood Mac version, not the Dixie Chicks.

I have a tiny bit of dignity left.

I’m not sure why I thought four years and a diploma would immediately make me possess adult capabilities.

I do appreciate how optimistic I was, but hopefully no other recent grads are fooled into thinking they are somehow supposed to have their lives together just because they finished school.

From the outside looking in, people's lives often seem perfect, but everyone is struggling with their own issues.

I blame social media for contributing to false beliefs and low self-esteem.

No one is going to post a selfie with tear-filled eyes captioned, "Crap, just got fired again. Looks like I'll be moving back in with mom and dad #livingthedream #depression #nofilter."

I wish people did, though.

It'd be quite refreshing and probably make us all feel a lot better.

The best lesson about the post-grad world I have learned thus far is it's so important to focus on making the best decision for you, regardless of what other people might say.

Right after college, I started a full-time job with amazing pay and benefits.

My family was ecstatic for me, and it seemed like I was on the path to success.

Turns out, the job was completely horrible and pushed me into a dark pit of despair.

I called my mom every morning, sobbing and begging her to let me quit. (Yes, I was still asking for permission from my mother even though I was technically an adult.)

I didn't have another job lined up, so it was a bit reckless to quit, but I eventually did it anyway.

It was by far the best decision I've ever made.

But, it was awful at first.

My grandparents, whom I was living with at the time, were incredibly disappointed in me.

My grandma told me I was being childish and immature, which hurt me so deeply that I cried for days.

I felt incredibly guilty for quitting and was terrified people thought I was weak for giving up.

I wish it hadn't taken so long for me to realize I didn't give up; I just simply did what was best for me.

Staying in a job that tore me apart would have looked good on my résumé and impressed my grandparents, but my happiness was way more important.

It was rough at first because I had to move back home with my parents and work at the mall until I found another full-time gig.

But now, I have a fabulous job I love, and my mom doesn't have to hear me weep all the time.

I'm still silly and text my friends stupid things like, "Woke up at noon, ate a bunch of cookies, then took a five-hour nap. What am I doing with my life?!"

But, I'm doing better at accepting the fact I have flaws.

I might never fully feel like an adult, which is totally fine. There's nothing wrong with that.

I want to shout from the mountaintops that it is okay to be a disaster.

It is okay to be completely confused, scared and exhausted.

Regardless of what job you have (or don't have), you are doing okay as long as you try your best and learn from your mistakes.

You got this. It'll be okay.

Just take things one day at a time.