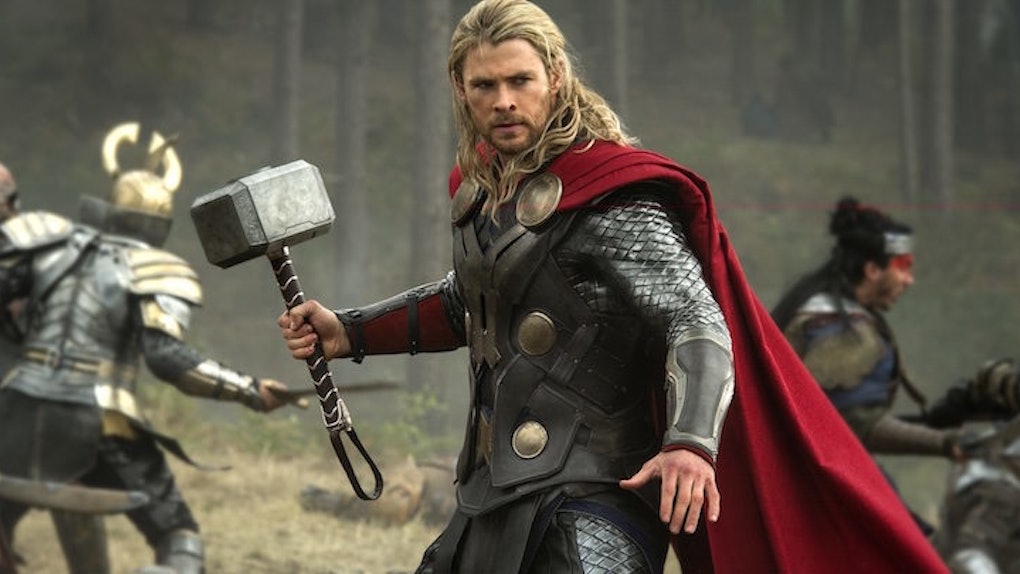 Chris Hemsworth's workout for "Thor" is proof that there's a lot more to being an actor than memorizing your lines and looking good on camera (although he's certainly nailed those parts as well).

While the 31-year-old former boxer-turned-personal trainer is fairly new to the media, he has been in the training world for nearly a decade and working with Chris for three of those years, helping him prep for his last six films.

Luke, whose also a Melbourne native, has trained with all of the Hemsworth brothers, using what he believes is a more "realistic approach" to fitness, using HIT (High Intensity Training) and functional training methods.

The way I normally train vs. training for 'Thor' are two different things, because 'Thor' is purely about putting muscle on and getting big to look a certain way, whereas I normally train in a functional, quicker way, where you're doing full-body exercises instead of just isolating specific body parts.

Luke also prefers to train directly alongside his clients, revealing Chris has a bit of a competitive nature. Luke says, if Chris isn't in the mood to train, he usually takes the reigns and does the exercise first to try and motivate his client.

Some people like to be yelled at, that old-school, drill sergeant approach, but I normally train alongside the people I work with and that's how I like to do it.

Luke shared Chris' "Thor" regime exclusively with Elite Daily, including specific workouts, favorite body part to train, how much he lifts, his daily meal plan, and of course, his go-to cheat meal.

On how much weight Chris has to gain for the role:

We've got a bit of a system now, because we've done it a few times, but he puts on over 20 pounds of muscle. It's mostly about getting the food in and the calories and training.

On how many days a week Chris has to train to begin the process:

When were training for 'Thor,' we probably train six days a week for about an hour, but never over an hour, because it's lifting really heavy weights – like old-school bodybuilding.

On the most Chris has ever lifted:

He doesn't go crazy heavy now, because he doesn't want to injure himself, but he's pretty strong. He probably curls 30 kilo dumbbells, which would be 60 pounds, each hand, so 120 pounds total.

Luke says Chris' favorite body part to train is his arms, sharing a few of his go-to workouts to pump up those bulging biceps:

Some good ones we always do are seated incline curls, standing curls, and hammer curls, which instead of bringing them up straight you're bringing them up across your body. We design the workout around the body parts he's gonna be showing off the most, he's gonna have his arms and shoulders showing, so that's the thing we really try to focus on building up.

On how many sets and reps Luke recommends for someone trying to pack on the muscle:

For each exercise we usually do four sets, and rep ranges anywhere from 8-12 reps. We kinda started lighter and slowly, progressively get heavier. When we first started off, we eased him into it, so we started in the 15 rep range for one week and then after that we went down 12, then 10, and 8, and slowly incorporated heavier [weights] each time. Then we have a de-load week and then start again, but then progressively getting heavier. So he's slowly getting stronger, but building up to it, not just going straight into it.

On how long it takes on average to see "Thor"-like results:

Anywhere from 2-3 months of prep.

While the duo seem to have the workout down to a science, it's the food that Chris sometimes struggles with due to the amount of calories needed each day to compensate with all the heavy lifting.

Luke even jokes, "By the end of it he gets sick of eating!"

So, how many calories does the hammer-wielding god have to consume? According to Luke, "Anywhere from 3,500-4,000 calories a day."

And if you're wondering how in the heck someone physically eats that much, here's a little glimpse into the superhero's diet:

Breakfast would be a four-egg omelet, with a bowl of oats.

He loves steak and salad, so there's always a steak in there and salad.

A couple hours after [breakfast] he'd probably have some sort of snack like tuna, avocado and cottage cheese. Then there's always a protein shake in there after every workout.

Probably some sort of chicken and veg meal.

And just like anybody, "The Avengers" star has his favorite cheat meal. Luke admits,

He loves pizza! He's a sucker for pizza. Pepperoni's his thing, for sure! He also likes his hot sauce -- he puts it on everything!

Luke hopes to get Chris to push 200 pounds by summer, and if all goes according to plan, the personal trainer says they are right on schedule.

"Thor: Ragnarok" begins filming this summer and is set to release November 2017, and if Luke has anything to do with it, Chris is going to be bigger and better than ever before.