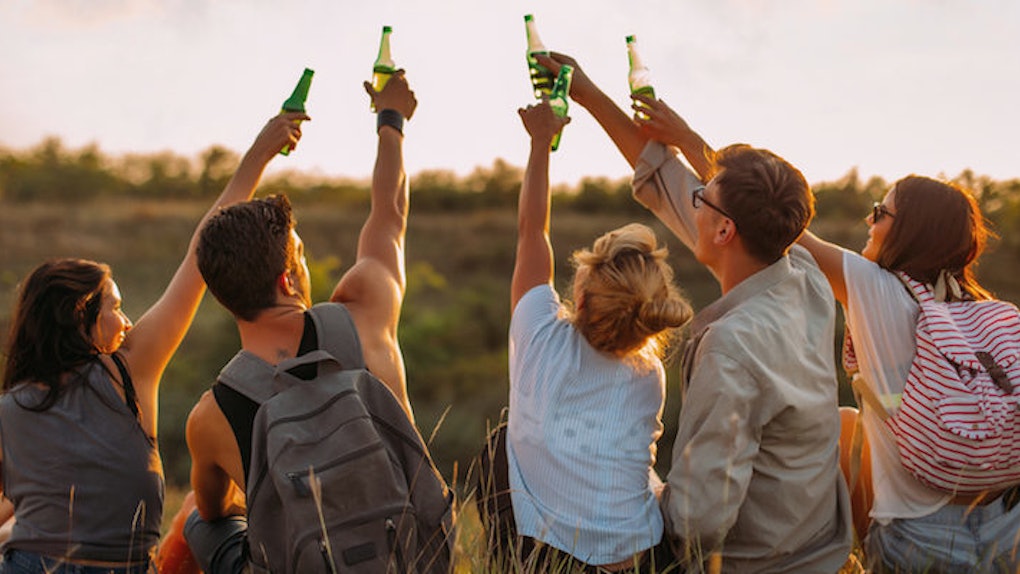 There are some friends in your circle who you know -- right off the bat -- that you can never go out for drinks with alone because they'll end up taking you to some seedy bar, and then will ditch you for someone else.

Sometimes, you just want someone there to listen to your problems while downing shots of Patrón. You want to know you'll still get home in one piece.

This is when you call on the Capricorn in your life.

Capricorns are friends who always seem to have their heads on their shoulders, but you're still guaranteed to have a night you'll never forget.

Here are 10 reasons why Capricorns make the best drinking buddies:

1. They'll listen to your drunk rants.

They're pessimists by nature, so they actually love listening to how much you hate your boss or how you're still getting over your quarter-life crisis.

It's not that they enjoy seeing you miserable.

They just like feeding into your drunken pessimism because -- for once -- they're not the only ones who see the cup half-empty.

2. They won't leave you hanging for a one-night stand.

Just because they see a really cute man or woman in the crowd, that doesn't mean they're going to drop you for some random person.

They take finding “the one" very seriously.

Even if  they have significant others, they're still perfect to go out for drinks with because they're rarely ones to cheat when they've found the right person.

They will only give it a shot if they feel they have your approval to pursue someone.

Even then, they'll probably end up talking themselves out of it because your friendship is always their top priority.

They want to stay with you to make sure you're having a good time.

3. They are basically wild.

Don't be fooled by a Capricorn's stoic behavior in class or at the office.

Although he or she is driven by ambition, a Capricorn knows that work is work and fun is fun.

Capricorns are as reserved as they are sober. Once the shot glasses come out, it's only “shots, shot, shots” from there on out.

It may take a couple of drinks before they feel comfortable enough to be in the spotlight.

But once they're in their comfort zone, be prepared for anything from dancing on bars to bellybutton shots.

4. They know how to hold their liquor.

These are the people you want around when you need someone to impress.

You might wonder how he or she can manage to go from drinking beer to taking shots of Fireball whiskey while still functioning like a human.

It's the Capricorn secret.

5. They'll challenge you to any drinking game.

They take pride at being the best at everything.

These are your go-to friends who you can count on to carry the team in flip cup because they hate losing that much.

Even if it means they have to learn the rules to a new game, they'll learn quickly, to the best of their little drunken abilities.

If you bring out the competitive side of a Capricorn, you'll probably be sorry you even said the words “beer pong” at all.

6. They make the best bathroom attendants.

When they say they'll “hold your hair up any day," they really mean it.

They know actions speak louder than words, and they take your friendship seriously.

This means you won't end up in the wrong restroom for once.

You also know you won't come out looking like you just fell in the toilet.

7. If they have to, they'll be your designated drivers.

Since Capricorns work so hard throughout the week, this is probably the one day they've been looking forward to letting loose and throwing back a couple of beers.

However, they won't let a night of fun go to waste at everyone's expense because no one wants to drive.

They're rational enough to take one for the team as the designated driver because that'll mean one less hangover for them and the perks of watching you in your drunken stupor.

8. They're game for anything within reason.

Capricorns are the people you can trust to never let you end up in jail because you just had to curse off that cop.

They care too much about both their well-being and yours to know that risking an irrational moment of rage isn't worth the outcome.

9. They won't let you send that drunken text to your ex.

They've seen you at your best and worst with your ex. They therefore won't stand seeing you put yourself through another game of hard to get.

Their sense of logic and reasoning makes them the perfect friend you can rely on. This way, you won't send that all-too-familiar “I miss you” text.

Just don't be surprised if they take away your phone privileges for the night.

They are practical even when drunk: They know it's called “last call” for a reason.

Despite feeling like the life of the party, they won't let themselves black out at your expense.

They're the ones you can count on to stop you from getting just one more tequila shot.

They know it's never just one.