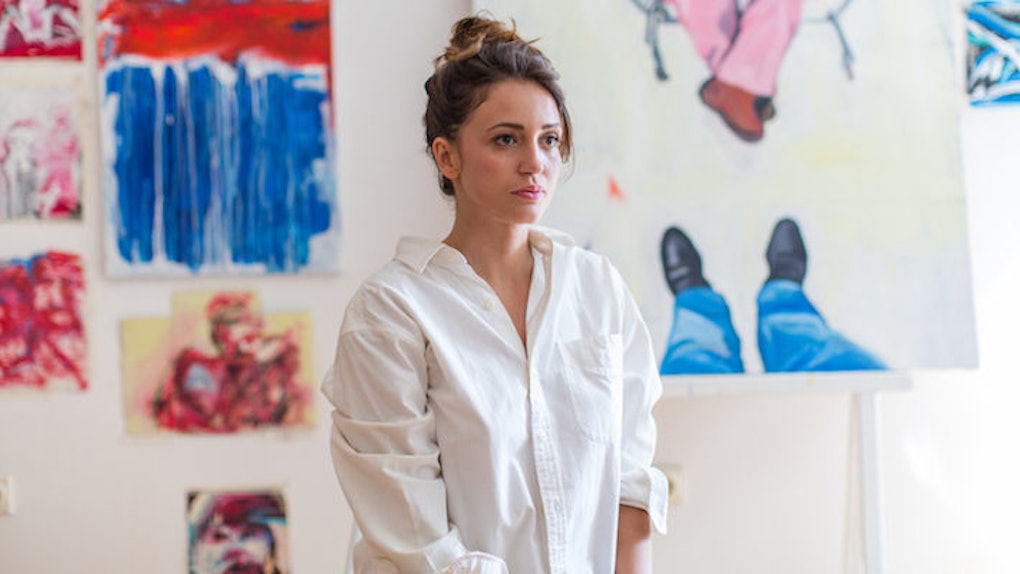 Fellow songwriters, choreographers, painters, filmmakers and poets: Artist's block doesn't exist. At best, it's nothing but an excuse for laziness. The entire concept is not only fancifully reductionist, but transparently telling of how severely we underestimate ourselves.

Artist's block is just a flawed, persistent illusion that conveniently frames inspiration as something we're all naturally entitled to. It suggests that something as genius as the law of gravity can be borne from an event as isolated and mundane as an apple falling on someone's head. But inspiration isn't something that manifests itself in front of us simply because we fancy its presence.

True creation comes directly out of the process — from the blood, sweat and tears. Every great scientist and artist can and will attest to this. There's no way out of it. You have to get your hands dirty if you want to create.

Don't wait around for inspiration. Create it yourself.

Ritual, persistent work (even if it's forced) is key. There's a common misconception that producing ideas is an elegant, timely arrangement. But the creative process is far from 100 percent efficient, and inspiration isn't an inexhaustible resource. Investing in the craft is like tapping into renewable energy, and a fierce sense of loyalty to the craft is involved. We get just as much out of it as we're willing to put in.

Get to know yourself and your art through the mechanization of a routine, and establish a ritual to ensure that you're allocating time to regularly exercise your creativity, whether it's 45 minutes a day of writing or two hours a week of editing film. Experiment with your schedule, and let it settle into a cycle that best channels your energies.

Life is like riding a bicycle. To keep your balance, you must keep moving.

Drop the expectation that everything you crank out should be of the highest quality. Make a habit of forcing progress and getting results, even if the end products aren't necessarily up to your standards. Creativity isn't about perfection; it's about expression. Artistic invention is messy and raw, and masterpieces require a lot of effort and refinement.

So, spill your soul out on that canvas, revel in the disarray. Polish and perfect later.

It is not that I'm so smart, but I stay with the questions much longer.

There's an entire scientific literature out there that reaffirms the role of perspiration and discipline in innovation. So, glorify the mess-ups, stay invested and allow yourself to get more out of the process. Mistakes are not only necessary, but also beautiful. And that pile of crumpled-up papers littering the base of the trash can is truly a feat to be proud of.

Establish an active, open dialogue with your work.

James Webb Young points out in his book, "A Technique For Producing Ideas," that the crucial “Aha!” moment actually comes only after one's thoughts have already been thoroughly cultivated. Research also suggests that interplay between both hemispheres of the brain is required in the creative process, and that formulating new ideas requires the active involvement of the entire brain.

In other words, innovative ideas don't just happen in isolated bubbles. Inspiration is all about being engaged in your craft and maintaining a dynamic, free-flowing dialogue with it. We need exposure to changing environments and atmospheres to widen our horizons, to galvanize the cycle of intellectual stimulation and questioning that's so crucial to developing new insights.

Increase your neuroplasticity by analyzing and forging connections between seemingly disparate phenomena. Practice open-mindedness. Make a habit of mulling over ideas whenever you can spare to do so throughout the day while you're walking, eating, driving or taking a shower, so your designs and objectives will be better formulated when you actually sit down and get to work.

Don't wait until you're ready.

You'll never be 100 percent ready. We grow not only as artists, but also as human beings precisely by being in situations for which we are not ready. And yet, we tend to underestimate just how powerful we are and how far we can push ourselves.

Human nature is mutable and endlessly multifaceted. True potential is illuminated by engaging with the chaos, by collaborating with the unexpected and the unknown, through the violent, yet profound experience of reaching out of our comfort zones. Our art reacts to radical expansion in the same way.

The worst enemy to creativity is self-doubt.

Ultimately, there's no joy or meaning in waiting around for an epiphany to hit you. Staying in place not only takes the purpose out of artistic expression and erases the value of the creative experience, but it also forces you to be directionless.

So, stop wasting time preparing meticulously and tediously instead of actually constructing. Don't overanalyze or overthink.

We have to continually be jumping off cliffs and developing our wings on the way down.

Newton And The Big Bang

For every action, there's an equal and opposite reaction. What you search for is also searching for you. What you create is also creating you.

And just as the formation of our universe and solar system began as chaotic and destructive only to self-regulate over time into something balanced and pristine, art is also born from the chaos. It's born from the cataclysmic reactions between half-formed ideas and seemingly disparate facts.

As artists, we witness the anarchy, and then through hard work and endless hours on the grind, we mold it, extract the pieces we desire and make it our own.

For a star to be born, there is one thing that must happen: a gaseous nebula must collapse. So, collapse. Crumble. This is not your destruction. This is your birth.

Erase the concept of artist's block from your mind, and fall in love with the process of artistic creation. Ultimately, actively and passionately creating rather than passively accepting what's handed to you is the best way to lead a meaningful life. And above all, a life on your own terms that you can be proud of.