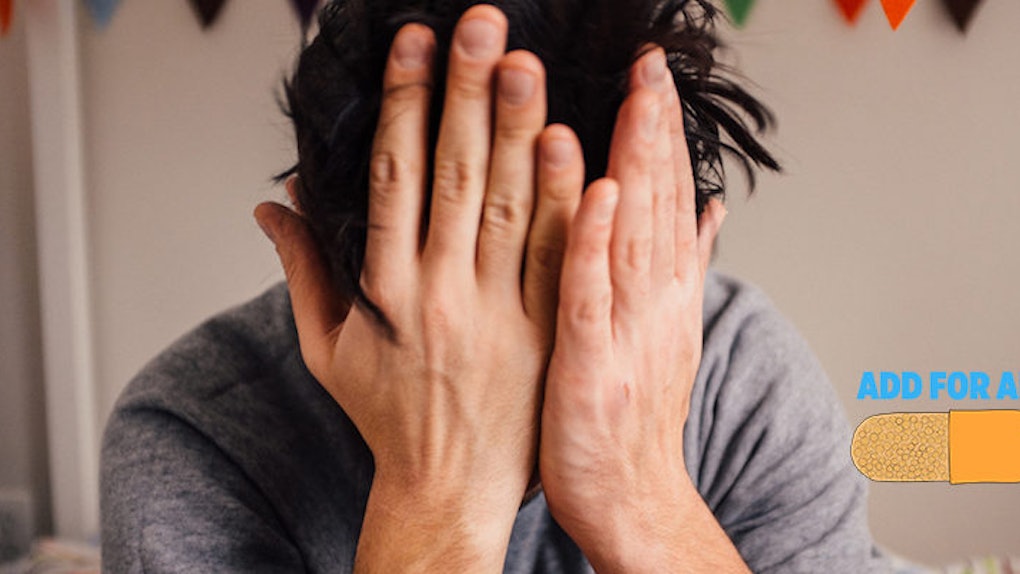 I Had A Public Meltdown On Adderall, And It Changed Me

In the 48 hours I stayed awake after taking Adderall, I wrote several end-of-semester essays, color-corrected a video final, had a mental breakdown in a computer lab full of people and stood on the ledge of a rooftop for hours, frantically journaling the pros and cons of jumping.

Let me back up a bit.

When I first started college, people were whispering about this mystical pill that allows you to finish all your work.

Not only did it keep you up longer, but it made you infinitely more productive. And that was its appeal.

I've always been the type of guy who seems like he's got it all together, and this wasn't any different in college.

Taking 18 credits a semester at school, working three jobs, handling escalating roommate drama and trying to have a social life all started adding up.

Still, I smiled through the stress and kept up the illusion that I had everything under control.

Still, I smiled through the stress and kept up the illusion that I had everything under control.

It wasn't until finals week that I began to really feel like I was drowning.

After arguing with my roommate's mother on the phone (yeah, that really happened), I finally got myself to campus so I could catch up on work.

When I arrived, my friend noticed I was feeling off.

After some persistence, I finally confided in him, expressing my stress. In return, he offered me Adderall.

To this day, I cherish this friend and know that he was simply trying to help.

He would never have knowingly put me in harm's way, nor do I think he actually did. At the end of the day, I took the pills, and I mistreated my body.

When I took the first pill, it felt great. I was wired, but focused.

I sat at my computer and knocked out an essay. I checked my clock... only an hour had passed. I pulled an all-nighter and went to classes the next day.

I felt superhuman. When I began to feel drowsy, I popped another pill. This was love.

After classes, I met up with a friend of a friend to buy some more. I was tired, sure, but not in a way that felt like I should rest.

When I began to feel drowsy, I popped another pill. This was love.

I continued taking Adderall, pumping out essays between jobs and ignoring my roommate and her mother. Nothing could touch me. I was literally doing it all, so thank you Adderall!

Like most people who take Adderall recreationally, I lost track of time. I forgot about an incredibly important video final, which, as a film major, would mean the difference between passing or failing.

All of my productivity felt wasted... yet I somehow felt OK.

I would explain my situation to my professor. He'd hear how much was on my plate, then offer me an extension. I'd pop a few more pills, and boom! I would be golden. Cute, right?

I approached my teacher before class; he wouldn't even take five minutes to talk to me because I didn't have an appointment.

Looking back, I'm still frustrated that I was a visibly distraught and exhausted student, and yet he didn't bother to ask if I was OK.

Instead, he told me to hand in what I had, and I'd just have to live with whatever grade I received because I needed to manage my life better.

I stormed away to the computer lab: the setting of my mental breakdown. I started screaming about how awful he was and how my school was just the worst.

I threw things, stomped my feet and left. I was (and am) beyond embarrassed. I literally had a temper tantrum in front of a dozen of my peers, which just added fuel to the fire.

All of my stresses flooded back to me: work, school, work, roommate, work, repeat.

Because I was spending all my time focusing on school assignments and feeling high on life (and Adderall), I was able to push aside my other worries.

But when my singular focus developed into a problem again, the rest began to snowball in.

I couldn't handle it. I headed to my friend's house, with whom I had become extremely close through bonding over similar stresses...

Except I didn't go for her or the support she could provide; I went for her roof, which I knew I could access easily without anyone knowing.

I stood there for hours, bouncing between the ledge and my journal.

I wrote a goodbye letter to my mom and my friends. I wrote a pros and cons list of life. I wrote a list of who would miss me and what I would miss. I wrote about the things I couldn't wait to escape.

I felt alone, scared and unsure of what my next move was until I looked up from my notebook and saw an old man staring at me through his distant window.

Who was he? My first thought was that he must be God. He was still and made no moves and no attempt to contact me. Would he let me jump? Did he know I wouldn't? Because he was right.

I felt like my privacy was invaded, and I welcomed it. My solitude ended and so did my scrambled thoughts. I was tired and stressed. I was drugged up. I was just ready to go home.

The next morning, I woke up not remembering how I even made it to my bed. I tossed the remainder of my pills in the trash, survived the semester, got new roommates and quit two of my jobs.

Suddenly, my stressors began to fade away.

For a long time, I blamed Adderall for why I went to that rooftop, but, eventually, I began to take ownership. I spread myself too thin. I took the Adderall. I put one foot in front of the other to that ledge.

Most importantly, though, I forgave myself.

Now, when I am overworked, tired and stressed, I may not pop a pill, but I do still go to a rooftop.

I don't go with plans to jump; I don't even consider it. I simply go to take a deep breath and enjoy the view.