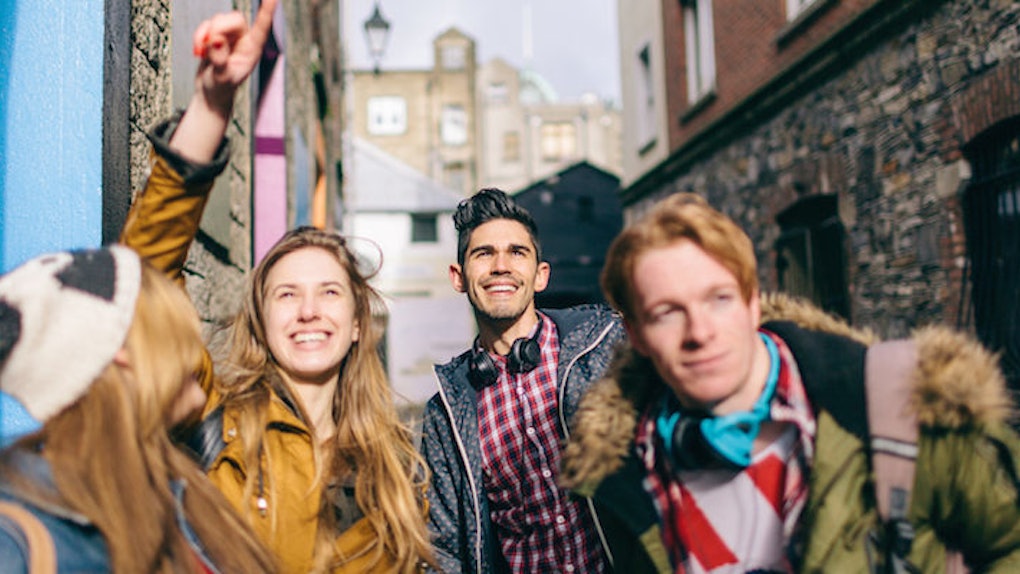 Male-female friendships have been a slippery slope since the dawn of time, and they will continue to be seen as such, even into today’s dusk.

But, the stigma surrounding close friendships with the opposite sex shouldn’t be a matter of gossip or frenzy, but rather, a typical form of social progression.

Genders are not limited to different schools or nations; we coexist. Moving forward, it’s important to recognize the greatness that comes from both thriving and connecting in a non-romantic context.

(PSA: There’s a beautiful place between being “in love” and “in the friend zone” that needs a shoutout.)

We view the two sexes as an astounding dichotomy, a subject of eternal pop-culture study and personal distress. But when two personalities complement each other, despite their gender roles, it’s exciting.

We have a lot to learn about ourselves and about others.

Never judge a bro by his cover, or his discreet dedication to Ariana Grande. Rather, recognize the sanctity of your broships as a symbol of inevitable equality and glorious memories.

Here’s to all the male-female friendships that deserve some R-E-S-P-E-C-T, with a heavy side of McLovin’.

1. You learn how to disregard public opinion for something more important: your happiness.

When you become close friends with the opposite sex, people are quick to assume you two are invested romantically.

They'll ask you if you're dating or what's going on, and you'll sincerely respond with the ironic, "Nothing, we're just friends."

It usually sounds more incriminating than it should.

Eventually, bystanders will assume you're covering up an elaborate Watergate-level relationship, or they'll come to terms with the fact you're painfully platonic.

But, in the meantime, you have to learn to endure awkward glances and jokes at your expense from people who don't get it.

In the end, though we win. We have friends to watch "House of Cards" and College Humor with, to accurately analyze our texts and to indulge our obsession of eating everything in sight.

They also still tolerate our Snapchat antics, with no strings attached.

2. They sustain and strengthen your faith in the opposite sex as well as all people.

Regardless of their sexual orientation, it's really rewarding to know good guys, just as it's good to know anyone who surpasses your typical expectation.

The media is great at amplifying insecurities within relationships. Everyone is quick to explain that men are either princes or players, both of which set our generation up to romantically fail.

In reality, men have creative ideas, thoughtful opinions and deserve as little judgement as any person.

Staying up discussing campaign finance reform, questioning the popularity of Iggy Azalea, exchanging spoken words, being secondhand serenaded and having sports explained repeatedly (and unsuccessfully) are just a few of the blessings that come into your life when your boys are by your side.

You feel comfortable around the guys who are goofballs, intellectuals, artists, romantics and dreamers. They remind you everyone has the potential to shift your perspective (before stealing your snacks, of course).

3. You always have someone to help you help yourself.

We all can be a little ridiculous, but sometimes, ladies, we overthink everything.

When 2:11 am rolls around and we're dissecting a montage of ambiguous Instagram likes and brief responses, we're on the brink of letting our irrational side get the best of us.

Nobody is better at convincing you you're being over-the-top like a guy friend who chokes back laughter at all the irrelevant connections you thought you made. In fact, it's a little embarrassing.

Until you realize he's right.

4. When they have to, they'll protect you from everybody else, too.

They're the ones who make sure everyone gets home safely at the end of night without Guy-Creeping-In-Shadows-At-The-Bar (or, as you've referred to him all night in the group message, "Definitely a Marcus").

In return, you share your fries with them at Steak 'n Shake because you owe your pals for abandoning the hotties at the bar.

When the evening takes a bad turn, your guys friends morph into a motivational Shia La Beouf squad. It's slightly scary, but it's too hilarious to not appreciate it, despite your lame night.

"I just wish she wouldn't be so passive aggressive with me..."

"Ah, forget her. DON'T LET YOUR DREAMS BE DREAMS!"

5. You continuously update each other on dating etiquette.

When your guy friends are pursuing someone who sounds like a grade "A" match, you become personally invested in their success.

A grammatically correct Tinder bio, cologne subtlety and rehabilitation from late-night triple-texting are a few of the lessons you can bestow on your Y-chromosome bros.

You will help them avoid the friend-zone, and they will tell you a monogrammed waffle iron isn't a good birthday gift (even though you think the letters would capture the syrup perfectly).

6. Someone gets everything about your humor.

There is always a sudden and undeterred urge to unleash your most extreme sarcasm, puns and pop-culture references when with guy friends. And they will be appreciated more by them than anyone else.

You won't experience any judgmental side glances, and no one will ask why you say, "true chainz." No, with them, it's all on.

Bond over "Modern Romance" by Aziz Ansari, and allude to Andy Samberg as you throw something on the ground.

All you have to do is watch your dudes laugh and feel super important because you're hilarious, and have shinier hair than at least half of them.

7. You get an all-inclusive, all-expenses paid vacation to the mysterious realm of manly mentality.

When your guy friends ask you what to respond to a text, how to caption an Instagram pic or what wear on a date, it's heartwarming and relieving because it means you're not the only neurotic one.

The answer for each of these scenarios is clearly, "hey," with a wink emoji to indicate things are getting pretty serious; any Kanye verse and burgundy because it complements their "sun-kissed glow."

It also makes you super appreciative of all the meticulous decisions your romantic interest says and does.

"I wonder if he actually knows that burgundy complements his sun-kissed glow, or if it just does that for everyone? Whatever. He's so clever."