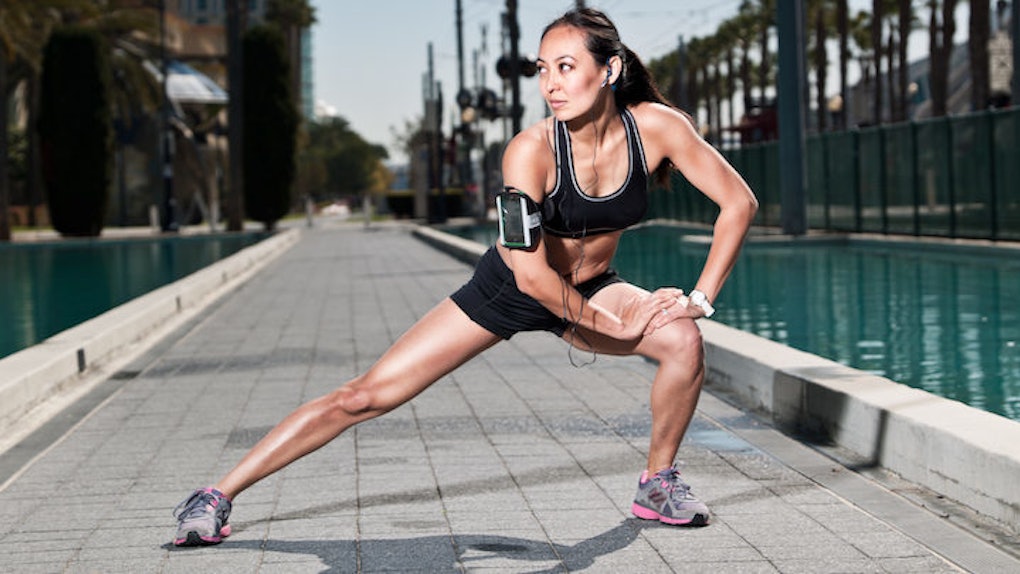 Power In The Pavement: 25 Things All Runners Know To Be True

A little over five years ago, my running friend challenged me to run a four-mile race with her.

Although never a runner, I was always athletic, so I thought, “Pshhh, sure, no big deal!”

I ran a mile on the treadmill usually at the gym with ease, so I figured, how hard could a few extra miles be?

After I panted and sweat up the Central Park Hills on the west side during that race, I realized four miles WAS a big deal.

However, by the last quarter mile of fans and cheers, I soon forgot the aches, pains and sweat dripping off my forehead, as I had my first “runner’s high.”

Soon, a four-mile race goal turned into wanting to run a 10K.

Before I knew it, I was meeting friends early in the morning for an endorphin boost before I needed a caffeine boost.

After running my first half marathon, then my second and eventually training for a full marathon, it hit me one day that my entire world had changed since starting to run.

Conversations turned from where to go for the next happy hour to conversations involving healthy, post-run protein shake recipes, lactic acid and the dreaded-but-lovable foam roller.

Late nights were replaced with early nights in, so I could wake up and run.  Money spent on club clothes was now spent on running clothes, mid-run fuel and other running centralized products.

Although not a fast runner, I consider myself a running enthusiast.

I am by no means a sprinter, or even in the top 30 percent for race times.

However, I consider myself part of the crazy dedicated community that enjoys the pain because they know of the gain.

I'm one who loves to talk about tricks and tips to help the next runner, and who wants everyone to join running.

Here are 25 other things you’ll only understand if you’re a runner.

1. The first mile is the worst. After the excitement of lacing your kicks up, stretching and getting out there, the first mile feels awkward and downright mean.

2. The last mile is the best. You’re almost there and starting to feel those endorphins kick in. You stink; the sweat is dripping, and you still feel like a million bucks.

3. You still painted toenail polish on your skin where a toenail used to be. I remember when I lost my first toenail after a 16-mile run.

I was appauled not only at myself, but at the moment I caught myself thinking of ways to cushion that skin in preparation for my next run. It’s summer and we’re supposed to wear flip-flops. What else are you supposed to do?

4. You can’t start your run until your GPS is on. Those who say it’s not about the distance but the workout are all liars.

Excuse me while I turn my Nike app on, and talk to my other running buddies about adding more strength training to make me PR.

5. Happy hour is a distant memory. When you have to wake up at 5 am in order to get that run in before work, the idea of staying out late and waking up with a hangover becomes less appealing.

And, putting alcohol in your body? Poison! There’s nothing like a true run of shame when you smell the whiskey coming out of your pores.

6. Your sports bra replaces your purse. Credit card? Metro pass? ID? Cell phone? Yep, all of that has been stuffed right in there on top of Laverne and Shirley. Talk about multi-functional.

7. You feel guilty on days off. Any runner knows the importance of taking a day or two off a week during training to avoid strains or pains.

It doesn’t mean you’re not guilty or feel like you should be doing something when you do. Wait, I’m not going out on a run? I have to have a day off? What do I do? I’ll just sit here and twiddle my thumbs.

8. Hill days are hell days. Hill days help your endurance, and every runner knows the importance of them, especially when you’re training for a race. However, it doesn’t mean we have to like them.

9. That awkward moment of eating GU nutrition packets while running.

10. That awkward moment of trying to drink water while running.

11. Nipple Band-Aids. Men, I completely understand you want to avoid chafed, bloody nipples post-run. Doesn’t make it less traumatic to watch you carefully put them on in Central Park pre-run.

12. Bikers be damned. Every runner has had the experience of a biker yelling to get out of the path. What am I supposed to do, run into incoming traffic?

The war between runners and bikers will always be a continuous battle. You’re lying if you’ve never thought about wanting to throw a stick in their spokes.

13. We love our running gear. Did you hear about the latest running belt? No? Girl, I gotta send you the link! You need five.

14. The more you run, the more you can eat. Shake Shack? Pizza? An entire lumberjack breakfast? No judgment here! You need to fuel your body.

15. Most of your laundry is stinky, sweaty running gear.

16. You plan your day around your run.

17. Strength training is necessary. Leg lifts, squats -- you name it. All of these are essential to proper race training and improving your time. Don’t forget to add some yoga on your days off of running for added stretch.

18. You have a playlist dedicated to running songs. There’s nothing better than hitting a hill and thinking, “Come on, Taylor Swift, help me shake this off!”

19. Body Glide is your saving grace during a run. No one, and I repeat NO ONE likes chafing.

20. You’re not afraid of your gross hygiene habits during your run. “So what if you saw me snot rocket? I have to PR!”

22. You know not every race is a marathon, and correct those who think so.

23. You’ve tried to convince non-runners to join a race with you because it’s ONLY 3.1 miles.

24. You’ve slept in your running clothes in order to get a longer run in before work.

25. You have a love/hate relationship with your foam roller. It hurts so good!