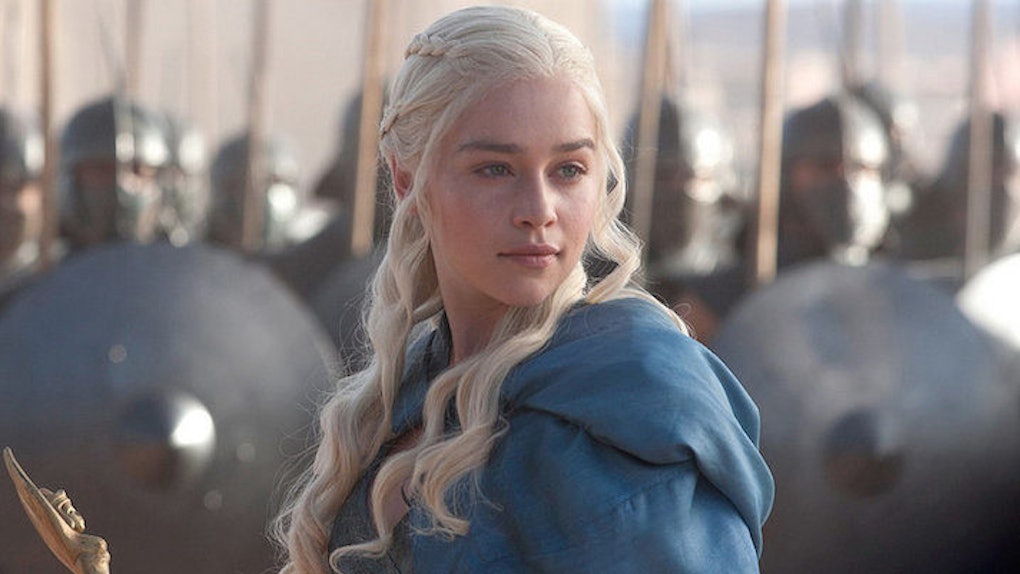 For those unfamiliar with her, Daenerys Targaryen is basically the most badass character in the entirety of "Game of Thrones."

She's everyone's favorite not-so-underdog, and easily one of the most attractive mythical characters of the last decade.

As we approach the season five finale of "Game of Thrones," I think I speak for everyone here when I say I am thoroughly impressed with last week's episode.

Despite the chilling and terrifyingly f*cked up scene of Stannis burning his daughter alive, I'd say Daenerys' end escape on Drogon gave me hella goosebumps, and made up for an otherwise very depressing episode.

So, here are 10 lessons everyone should learn from Daenerys Stormborn of the House Targaryen, the First of Her Name, the Unburnt, Queen of Meereen, Queen of the Andals and the Rhoynar and the First Men, Khaleesi of the Great Grass Sea, Breaker of Chains and Mother of Dragons.

You may not have the blood of old Valyria running through your veins, but that certainly does not mean you have to put up with sass from anyone or anything that gets in your way of living life how you see fit.

You do you, and let no one stand in your way.

If Daenerys had not trusted her instincts, she would have never had her dragons.

Only you know what's best for you; do not let anyone pressure you or persuade you into doing anything you don't want to do.

Ultimately, the choices you make will always come back to you some way or another. Live with this in mind: While it may not be entirely possible to live guilt-free, it is completely possible to make smart decisions.

So, if in your own life, you ever feel the need to walk into an inferno to save a dying race, go for it.

Only you can do what you do, and ultimately, only you are responsible for your actions. If you live by a personal sense of right and wrong, and treat yourself with dignity and respect like the queen you are, others are bound to, as well.

Even after her brother died, Dany wasn’t all alone in the world. All of her family members had gone, but she still had her dragons.

Just as Dany did, you should go to the ends of the earth for your family. At the end of the day, your family and your friends should matter most because they care about your well-being no matter what.

And, just as Drogon was for Dany in the latest episode, your family, too, will always be by your side in your toughest moments.

5. Listen to Others’ Advice

Whether it comes from your mother, roommate, best friend or significant other, if it comes from someone who knows you and who has your best interest at heart, sometimes, listening to what others have to say is the solution to the problem.

Even the Mother of Dragons relies on others to help her along. Never be too proud to listen to what others have to say.

Don’t let anyone ever put you in a box, or write you off because you are attempting a “man’s job.” There is no such thing.

Women are just as capable as men, and if Khaleesi's example is anything to live by, it is that women are unstoppable.

7. Have More Than You Show and Speak Less Than You Know

Sometimes, holding back everything you know can work to your advantage. A classic example of this is Daenerys vs. that jerk slave lord in Astapor.

She held her tongue when he insulted her and thought she was young and naïve, and look who ultimately got burned (pun intended).

Shakespeare and Dany might have been on to something with this bit of advice: Knowledge truly is power.

8. Surround Yourself With People You Trust

Daenerys Targaryen did not rid Slaver’s Bay of slavery or even cross the Red Waste all on her own.

Hell, she would not even have her dragons if it weren’t for close companions. Just as Dany accepted others’ help, so should you.

Not everyone out there is going to hurt you; the tricky part is finding people to trust completely and who will be happy for you when you succeed, even if they do not. Those are the people who are worth having in your life.

Whether it’s religious beliefs or more personal beliefs, living your life by some sort of moral guidelines is helpful when it's time to make a choice -- even if it’s just a choice between brunch with your friends or time with your family.

Just as Dany believes in right and wrong, so should you — even if you have to try a little harder the next time you come face to face with a choice that may affect others.

If there is something you have always wanted to do, or something you can’t stop thinking about, do it!  Live every day working toward your goals, and never stop trying to achieve them.

Whether it’s to rule all of Westeros, or even to just be learn how to cook without burning your kitchen down, dreams are important, no matter how small.