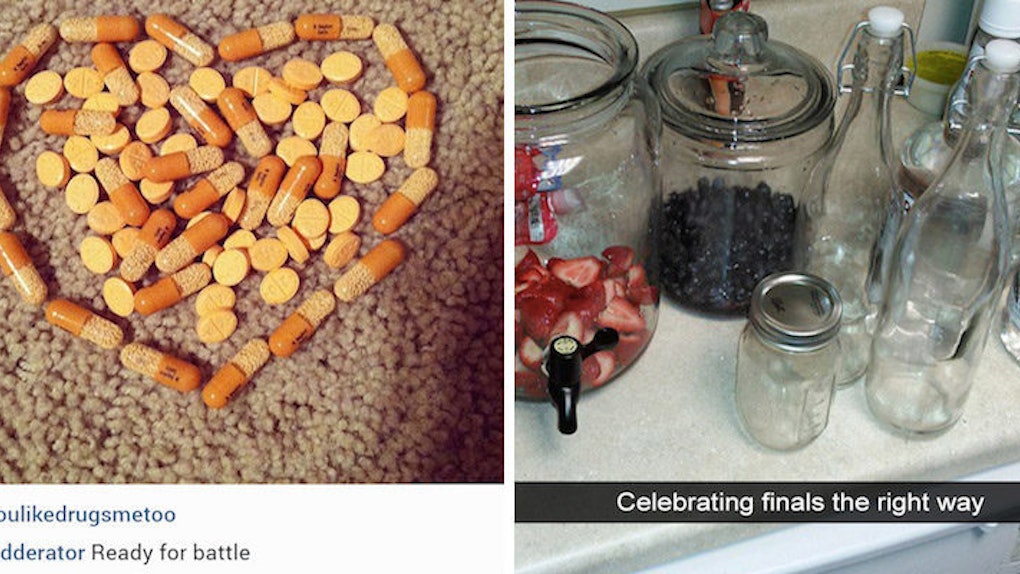 As an apathetic communications major who spent the majority of my time in class writing stupid things on the Internet, I never really got to experience the hell so many other people said I was supposed to when finals rolled around.

However, for the college students who actually use their time in school to broaden their horizons, become citizens of the world and -- most importantly -- get good grades so they can get good jobs, exams can apparently be fairly stressful.

I did spend countless hours in my dorm pecking away at take-home exams while people in the library stabbed each other with pens to assert their dominance (I assume that's how things work), and the majority of those hours were devoted to wasting time online to avoid doing any actual work.

Consequently, I've read countless Facebook essays and Twitter rants from college students doing what they can to decompress, and over the years I've noticed more than a few reoccurring themes that seem to pop up whenever the end of the semester rolls around.

There's nothing cuter than people who think they're the only ones with a stressful workload.

And for those people, there's nothing more infuriating than the people who don't take finals as seriously as they do.

I think one of my professors said drinking can increase your memory, but it's honestly kind of hazy.

Until they realize they should have taken things a lot more seriously a long time ago.

"THIS IS MATH. WHY ARE THERE LETTERS?"

The answer is "no," and the answer will always be "no."

I guess some people just really enjoy asking questions they already know the answers to.

Contrary to popular belief, there is such thing as being too prepared.

A good indicator you're trying too hard is when you bring half of Colombia's annual coffee exports to the library with you.

Fun fact: One of the side effects of taking Adderall is telling everyone you took Adderall.

Everyone has his or her stimulant of choice during finals week, and nobody else really cares what you pick.

This is college we're talking about. I'm assuming most people have.

Drugs have nothing on sleep deprivation.

If at any point you see one of the Monstars from "Space Jam" chilling on campus, it's probably time to get some rest.

What do hockey players and college students have in common? They're both known for growing sketchy beards during the month of May.

However, one group's finals are a lot more exciting than the other's.

You might be able to ignore personal hygiene for a while, but that doesn't mean you have to brag about it.

Analogy time! You might have the world's largest bed sore, but you still have a bed sore.

That's just how the world works.

Live tweeting your time at the library is a great way to basically do the opposite of what you went there in the first place for.

For every follower you gain from this, you lose a point on your final grade. That statistic definitely isn't made up.

I know it's rude to laugh at mental breakdowns, but sometimes I can't help it.

It's all fun and games until you graduate without any job prospects.