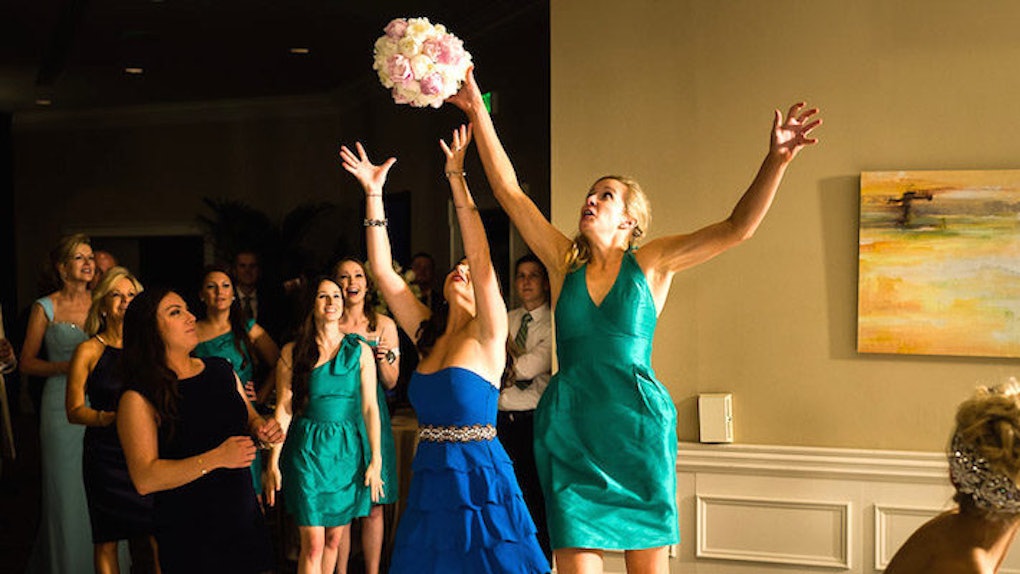 12 People Who Tried Way, Way Too Hard To Catch The Bouquet At A Wedding

Wedding days are filled with weird rituals and superstitions that people don't entirely understand but go along with anyway because their grandparents are coming from out of town and would be disappointed to attend a reception that didn't feature the Chicken Dance.

Of course, this is far from the only inexplicable tradition you'll encounter as more and more of your friends decide they're fine with being boring the rest of their lives.

For example, the groom should avoid seeing the bride before the ceremony if he doesn't want to turn to stone for eternity, and rain on your wedding day means someone is going to talk about Alanis Morissette's poor understanding of irony.

However, if we're ranking wedding rituals by the sheer amount of adrenaline involved, it's hard to top the bouquet toss, the magical moment when the most recently married woman in the room tosses a bunch of flowers in the general direction of a group of single girls hoping to follow suit.

Most people don't take this part of the reception too seriously, but there are always at least one or two people who have far too much faith in the magical properties of tightly bundled roses and baby's breath.

I'm not exactly sure what was going through the heads of these women when these pictures were taken, but I imagine it was an image of the beautiful future they're going to have with the man of their dreams thanks to their above average bouquet snagging abilities.

She will reach into the heavens for Roger, the mild-mannered architect who will eventually design multiple municipal buildings for the state of Iowa.

She will gladly punch another girl in the face to spend the rest of her like with Darren, a balding accountant who collects pogs ironically.

She will rip this girl's heart out to win the heart of Eric, an up-and-coming hip-hop artist from the Bay Area.

She will turn the dance floor into a fight club to brawl her way to the heart of Mike, who sort of looks like Brad Pitt from a certain angle when it's dark.

She will rip off another person's limb to avoid losing Albert, an avid collector of "Star Wars" memorabilia (coincidentally, this is also what Wookiees do if they lose a bet).

She knows Heather wants Thomas, the guy who used to play lacrosse in college, just as much as she does. If she can't have him, no one can.

She will bring a pair of shoes just for the bouquet toss to grab the attention of Anthony, an investor who doesn't know he's part of a pyramid scheme.

She thinks love is dead.

Nobody here seems in a rush to get married.

She'll do her best Odell Beckham impression to score with Austin, who will hopefully ignore the fact that she wore white to a wedding.

He will not allow Jessica, the girl of his dreams, to be with the man of hers.

She will tear off someone's head if it gets in the way of the bouquet and her chance to be with Arthur, who looks strangely like the cartoon aardvark.