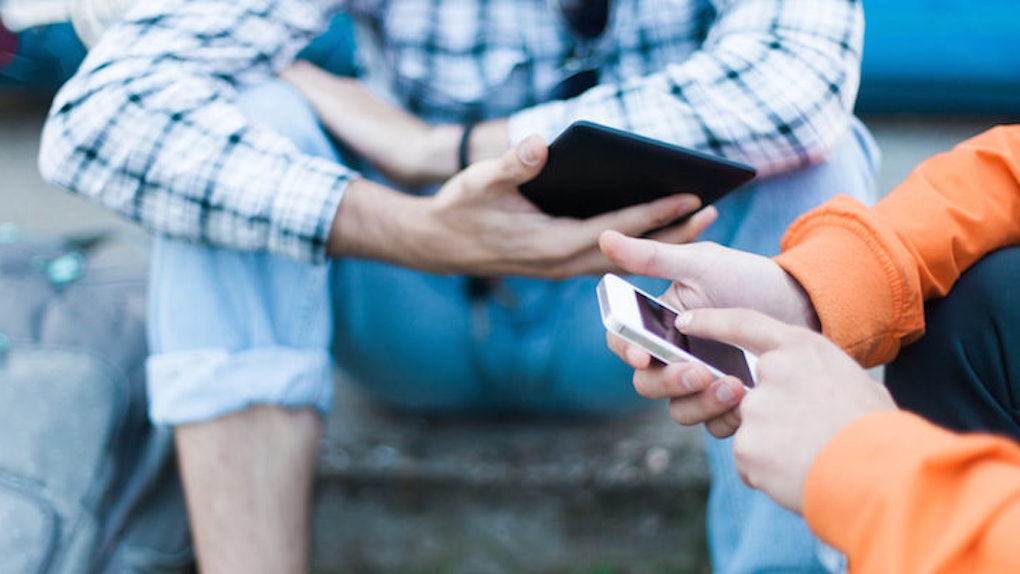 45 Social Situations That Are Impossible To Survive Without Your Phone

People constantly tell me to “unplug.” To get the f*ck off my phone.

And they're probably right. I would probably be a way more social person if I were physically capable of putting down my phone every once in a while.

Heck, maybe I would have fallen deeply and madly in LOVE with the guy who smelled like Axe body spray and who was sitting next to me on the train this morning...if I hadn’t desperately been trying to avoid eye contact by drafting unnecessary texts to my friends about what I'd had for breakfast this morning (Do they care? No. Do I tell them anyway? Yes.).

But sometimes life hands you some situations that are just absolutely f*cking brutal without a phone.

So the next time you are going to sit on your high horse and tell me to “unplug,” read this, look me dead in the eye, and tell me you would be totally comfortable in all of these situations without your cell phone.

1. When it is approaching hour two of getting your hair colored, and you have reached your max amount of small talk with your nice-but-much-edgier-than-you hairdresser.

2. When you go to your ex’s friend’s party to prove that you are so over him and don’t care at all...and then find yourself trapped in the hallway with him and his new girlfriend.

3. When you accidentally find yourself at a party at an apartment that feels eerily familiar and then realize that’s because you had a one-night stand with the guy who lives here (Jim…?).

4. When you go to a party where you only know one person...and that one person goes to the bathroom.

5. When you get to the restaurant before your date and the waitress awkwardly seats you at the table for two by yourself.

6. When the nail salon lady told you she would take you right now but then still had to finish the nails of four other people, and you already read every issue of every magazine they had out for you while you waited.

7. When you’re at a very intimate low-key kickback, and your ex just happens to stop by.

8. When your ex leaves the kickback, and everyone there seems to have forgotten how he mercilessly shattered your heart into a million pieces, so instead they sit around chatting about how great he is.

9. When you are waiting to use your favorite elliptical at the gym, but someone else is using it.

10. (When you are doing literally anything at the gym and are in desperate need of music to distract you.)

11. When you’re waiting for your train to get to the subway station and don’t even have service that far underground but need to, like, casually go through your camera roll so that you don't make awkward eye contact with anyone.

12. When you’re on the actual subway and there’s “train traffic.” (On another note, what is that code for?)

13. When you’re trying to decide what to eat and where to eat it.

14. When you are trying to get anywhere.

15. When you have no idea where you are going, but you are supposed to meet people at this new place.

16. When you are running late.

17. When you have a super brilliant thought that you need to tweet IMMEDIATELY.

18. When you are on the world’s most awkward first date and feel the need to live-text the entire thing to your best friend.

19. When you need to find a good rebound STAT.

20. When you were in one of those three-hour lectures in college.

21. When you left the office to go get a mani-pedi, but you are still trying to pretend like you’re at work.

22. When you’re hungry, but it’s too late to actually go out and buy food, so you put your PJs on and order some Seamless.

23. When you forget your wallet at home and have to rely solely on caviar and Uber to feed you and transport you.

24. When you see something f*cking nuts (think: people soberly grinding on the street in only their underwear) that nobody will believe unless you Snapchat it immediately.

25. When you do something so cool that you immediately need everybody to know about.

26. When some creepazoid is trying to hit on you at the bars.

27. When the person you are supposed to be enjoying some nice quality time with pulls out HER phone.

28. When you’re getting dressed in the morning and trying to figure out the weather. (Looking at your phone is obviously better than just peering out the window.)

29. When you’re on an airplane, and you find yourself sitting next to a creepy older man who slyly slips off his wedding ring.

30. When you’re awkwardly boxed out of a conversation.

31. When you’re walking in a group, and everyone is just blatantly faster than you.

32. When you go to dinner with your friend, and she goes to the bathroom.

33. When your high school friends who went to college together start gossiping about their random friends you don’t know.

34. When you literally have no idea or interest in the political conversation that everyone is having.

35. When you are out with a group and realize you hate everybody in it.

36. When you wake up after a night out and have no idea where you are, so you need to drop a pin to figure it out.

37. When you wake up in the morning in general.

38. When you want to know where your roommates are but don’t feel like texting them to ask, so instead you just track their locations on Find My Friends.

39. When you make that one-second-too-long eye contact with that creepy guy from across the bar and can feel him approaching, so try to quickly look somewhere -- anywhere -- else ASAP.

40. When you have a weird itch on the back of your right thigh and need to immediately find out if this means you have cancer.

41. When you’re trying to decide what you want to order at a restaurant and need Yelp for the visuals.

42. When people are having a conversation about something you don’t know anything about, and you need to do a quick Google check.

43. When you see a friend of a friend, and it would be awkward not to say hello (but you really don't want to).

44. When you are waiting in line for the bathroom.