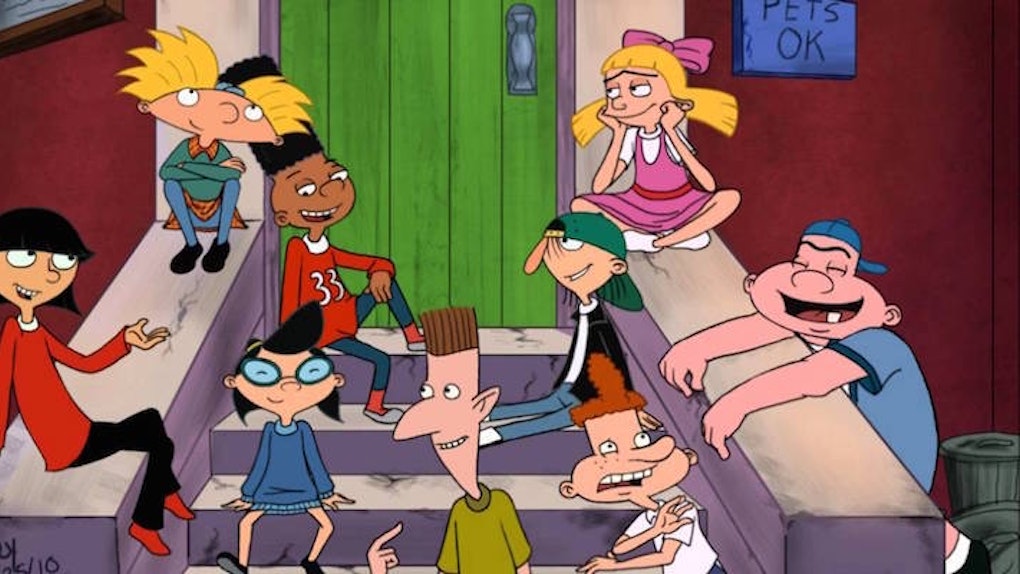 6 Major Things I Realized After Rewatching 'Hey Arnold!' As An Adult

Last night, Nickelodeon officially launched The Splat!, a block of programming on TeenNick that uses the promise of green slime and nostalgia to attract a target audience who has traditionally relied on Adult Swim to complement their late night bong rips.

I didn't get a chance to tune in because I don't pay for cable (like millions of other members of the demographic they're presumably trying to appeal to), but I do have some experience taking an inebriated trip down memory lane.

Earlier this summer, I got back from a night out and ended up sitting on my couch trying to find something I could watch without having to worry about intricate plot points and would preferably end before I inevitably and involuntarily passed out.

That's how I found myself watching "Hey Arnold!" for the first time in a decade -- a decision that eventually resulted in an impulsive order of the entire series on DVD when the show was taken off streaming two weeks after I rediscovered it.

I've been slowly working my way back through the series, and I've picked up on a few things I failed to notice when I watched it originally. Here's a list of a few of them I can use to justify watching cartoons in my 20s.

It doesn't take place in New York City... or anywhere else.

I assume most people construct their own version of New York based on how it's portrayed in movies and TV shows. As a sheltered child from Connecticut who didn't understand most of the references on "Friends," I based my image of the city on how it was portrayed in this show:

It was an entirely different world than the one I'd grown up in, filled with alien concepts like water towers, brownstones and diversity -- all things I never really had the chance to experience until I moved here a couple of years ago.

However, despite the obvious similarities between the cities, I realized none of the characters ever uttered the words "New York."

I soon discovered this was because the show actually took place in Hillwood, a fake city that also incorporated aspects of Seattle and Portland (which probably explains why Arnold's outfit of choice involved a flannel shirt with elements of a kilt).

They managed to get a lot of famous people to guest star.

Before animated shows like "Archer" managed to assemble a cast of voice actors you'd want an autograph from, cartoons largely relied on celebrity cameos whenever they wanted to switch things up.

"The Simpsons" probably has the most impressive list of famous people who've recorded lines for the show, and it's hard to top George Clooney's appearance as a gay dog on "South Park" when it comes to the most absurd example.

However, "Hey Arnold" also boasted a pretty impressive list of celebrity guests. These are some of the voices I only recently recognized:

Elliott Gould, Jim Belushi, Phyllis Diller and Mark Hamill also stepped into the studio to contribute at some point, and Haley Joel Osment somehow took a break from appearing in everything else made at the turn of the Millennium to voice a role.

Helga's mom was probably an alcoholic.

I know I'm not the first person on the Internet to point out the similarities Helga's mom shares with a textbook alcoholic, but I have to mention it based on how obvious the show makes it.

It wasn't just the frequent yawning, slight slurring and general disinterest associated with Miriam Pataki that leads me to make this armchair diagnosis.

In addition to the photo above, the show also shows her assembling a Bloody Mary:

And she had a glass of eggnog in her hand the time she sang Christmas carols very, very enthusiastically:

The final nail in the coffin? Her name is Miriam. That just sounds like the name of an aunt who pours herself a mint julep at 11 am every day.

Based on the information above, you'd expect Helga's mom to be the one character in the show who exhibits the most obvious signs of liver failure.

Well, her and the amateur chess player who commands an army of rats inside the sewers:

However, there's something about Harold's eyes that make me wonder if his parents have ever taken him to a pediatrician -- namely, the fact that they're disturbingly yellow.

Based on the number of times I searched for "symptoms of liver failure" in college, I know this is one of the indicators. I'm not sure if it's full-blown jaundice or just his body rebelling against the constant stream of food it's forced to digest, but that probably isn't healthy.

Arnold isn't the only person with a weird head.

I lost track of the number of times the show's titular character is referred to as "football head," a nickname presumably inspired by the severe cranial deformity Arnold successfully overcame to lead a fulfilling life.

I know cartoons will take certain liberties with the anatomy of human characters, but there's one glaring issue: Almost all of his classmates possess some sort of genetic defect, but Arnold seems to be the only person who gets called out.

Sid should see a doctor about the growth on his face.

Grandpa is apparently modeled after the vultures from "The Jungle Book" (and might also literally be a dickhead).

But for some reason, Arnold is the only person defined by his oddly-shaped head. I smell a conspiracy.

Arnold's grandparents deserve their own show.

Most people know the entertainment industry ran out of original ideas around 2006 and since then, essentially every production has been a spin-off, remake or gritty reboot of some preexisting property.

If any of the characters from "Hey Arnold!" deserve one of these, it's the grandparents.

On the show, Grandpa is the wisecracking voice of wisdom trying to live with a woman who exhibits more and more signs of Alzheimer's as the show goes on ("Yankee Doodle" is not a Christmas carol, and turkeys should not be used to top a Christmas tree).

However, the backstories teased on the show make for an incredible series.

Arnold's grandmother learned karate at a convent in Shanghai and at some point acquired the skills needed to break into an aquarium to rescue a turtle. His grandfather was a competitive Chinese checkers champion, Woodstock attendee and, oh, that's right...

He also gave Hitler a wedgie.

Who wouldn't want to watch that?