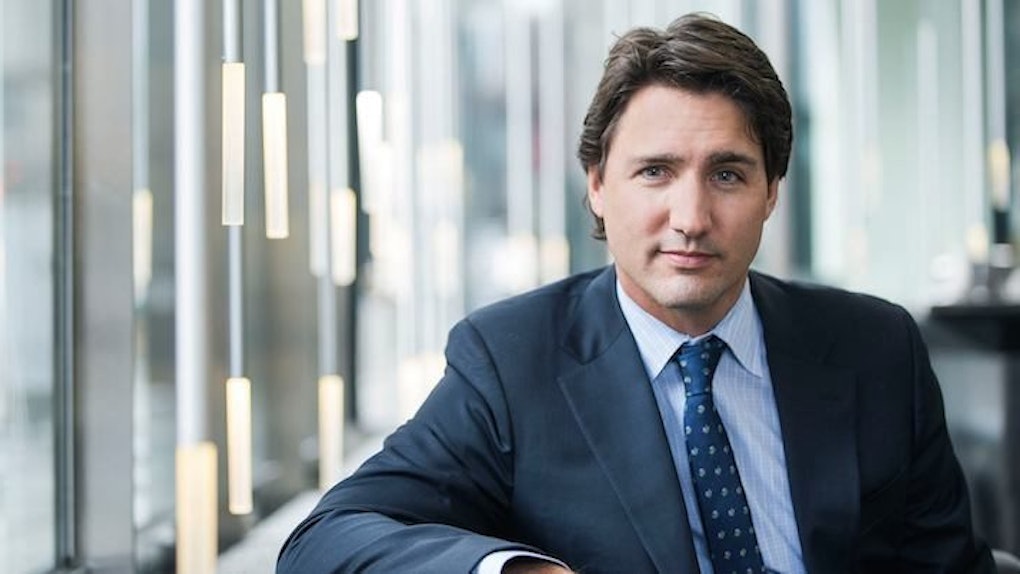 His ascendency to power has effectively overturned the conservative government that has been in place for 10 plus years, leaving my colleagues and me with one simple request for the American public: Can we please not talk about how hot he is? Thanks.

Seriously, it's a distraction.

Justin just seems like an all-around good guy compared to Stephen Harper (who implemented the ban on Muslim women wearing niqabs at citizenship ceremonies), so I'm worried if he keeps hearing about how he's sexy, he's going to snap and go rogue conservative. No one wants that.

Thus to prevent international catastrophe, I've assembled a list of nine things we're NOT going to talk about and NEITHER should you:

Yeah, you post that on Facebook and KA-BLAM! It'll get back to his aides and before you know it, he's green lighting Shell Oil to drill a middle finger straight through Nova Scotia.

That's not what we want for Mother Earth! No, no!

No. You're not even going to THINK about those. You know why? He's going to open the morning paper, read that, and then nix his whole Marijuana position.

So no, it's not worth getting guttural over his "soft hair."

I swear to God if you tweet he "has the torso of Poseidon" at his public Twitter account, he's going to revoke his feminist stance and we CANNOT AFFORD TO LOSE ALLIES THESE DAYS, DO YOU UNDERSTAND? WE ARE JUST NOW "HE FOR SHE-ING"!

Do you want to DESTROY INTERNATIONAL POLITICS?

If he hears how you want to climb him like a tree, he's going to get so frazzled that next time he meets with Benjamin Netanyahu, he'll absentmindedly agree Hitler never intended for the Holocaust to happen! This will 100 percent happen, no question!!!!!!!

If someone on the street yelled that you had kissable lips first thing in the morning, you'd be downright irate. So don't do this to Justin.

He will get angry and tax ALL Canadians, regardless of their income bracket!

Hot dad alert... but I didn't say that, and neither should you! If pictures of him tending to his children with the hashtag "sexme" end up on Instagram, he will say: "Screw relationships! And especially re-establishing better relations with indigenous peoples!"

He's trying to rectify hundreds of years of injustice, so stop being SELFISH.

The dirty word from a flirty bird is that he smells as beautiful as he looks but THAT DOESN'T NEED TO BE SAID, PERVERTS.

If that gets splattered on Access Hollywood, he's going to drop kick all prior political points and straight out embrace ISIS. ISIS!

Have you googled him boxing for CHARITY? Don't.

I bet you can see a lot of his perfect bee-hind and I know if I was Justin, I'd be so uncomfortable I wouldn't want to stimulate anything, like economic growth throughout Canada. Refrain, horndogs. Refrain.

Years of emotional stability may trickle from the dulcet tones his vocal chords emit but again, that doesn't mean you can comment on his party's YouTube page: "f*ckable voice box!"

So knock it off and leave Justin alone!

He's a politician, and if there's one thing we know for sure it's that a politician's looks shouldn't be part of the equation.

Except for Bernie Sanders because, like, that quivering mug is THE ONLY reason I'm voting for him!

So keep your comments to yourself, sheeple! It's 2015.