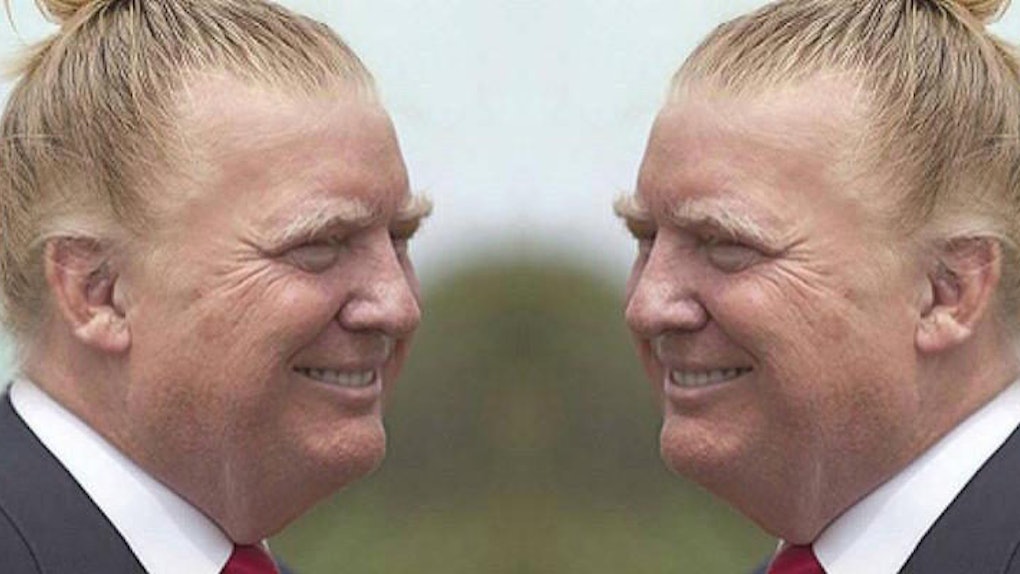 Want to spend the next 10 minutes shivering as the chill of fear and doom slowly creep up your spine before taking over your whole body? Say the words “Donald Trump with a man bun” out loud.

Yeah. Harsh stuff. Sorry about that.

Man buns are the Donald Trump of hairstyles: Somehow, man buns are still around and part of your life, despite the fact you've never met anybody who has anything positive to say about the concept of them.

Donald Trump is the man bun of people in that we knew he existed but never really had to deal with him more than seeing him on TV maybe once a week before early 2014.

Donald Trump WITH a man bun is… Honestly, there is nothing comparable to this awful mashup because it's the worst combination of things imaginable, and it's a Photoshop that should never happen.

Someone DID do the Photoshop, though, and it's horrifying.

LAST CHANCE TO CLICK OUT OF THIS ARTICLE BEFORE YOU SEE DONALD TRUMP WITH A MAN BUN.

YOU DON'T WANT TO SEE THIS.

TRUST ME. I WARNED YOU.

YEAH! BET YOU FEEL REAL STUPID FOR NOT LISTENING TO ME NOW! It's OK. We all make mistakes, and you weren't the only one to have this abomination make its way across your computer screen and into your long-term memory.

Others saw the Trump bun and reacted appropriately to the worst thing ever created ever.

God, have mercy on us all.