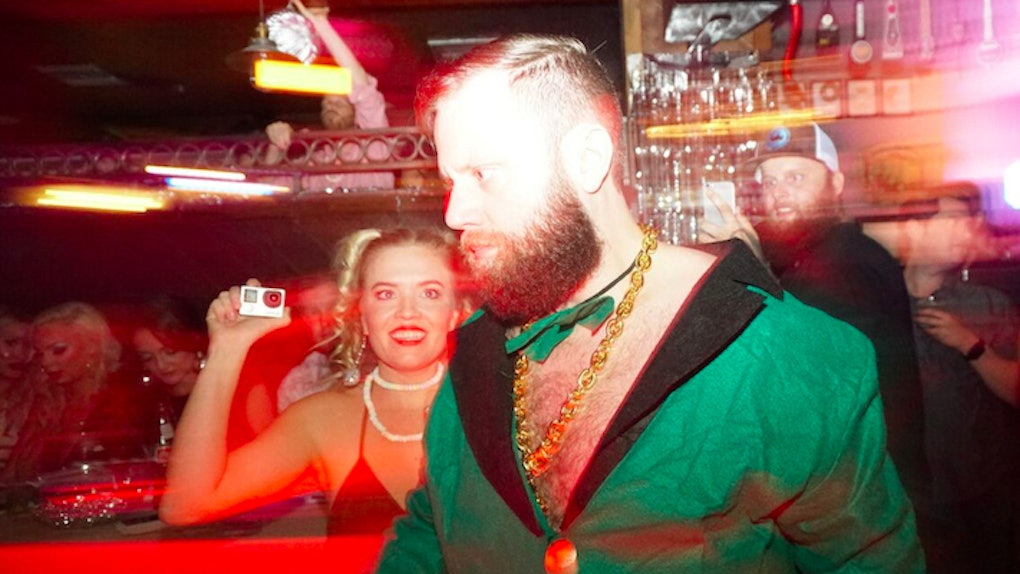 I Crashed An Epic LA Disco Competition And Won It All

Ever since I was little, I have loved to dance.

I don't mean that in a "Billy Elliot" way -- I wasn't coming out of the womb all like, "Mom, Pops, sign me up for ballet now! I want to be in 'The Nutcracker' as the Rat King STAT!"

But whether it was a communion, or a bar mitzvah or a school dance, one thing was certain: I was going to dance my chubby heart out until I was drenched in sweat.

Naturally, when the opportunity arose for me (as an adult) to sign up for my favorite bar's disco dancing competition, I couldn't say no.

I could only dance a "yes" with my feet (which is actually a really difficult task -- WHY DID I DANCE A "YES?").

The World Disco Dancing Competition that was held at the Surly Goat bar in West Hollywood required you to sign up as a country.

Being 100-proof Irish myself, I decided to represent that lovely Emerald Isle and shelled out the 20 bucks to register. With the first prize being $500, I thought it was a small fee to swivel my gangly legs to glory.

Of course, my favorite part of the night was telling people that I just got my necklace at Tiffany's (not the jewelry store, but a friend named Tiffany).

The Disco Village was welcoming and probably more sanitary than the Olympic village in Rio.

The bar even had a light-up dance floor. And look, there's my friend Jane who runs karaoke every Wednesday night. Say hi to Jane, everyone!

Uh, I said say hi. No, I'm gonna wait until you do it. JANE IS MY FRIEND SAY HI TO HER DAMNIT.

I had to be dragged away from looking at the medals. Seriously, I was staring at them harder than Abu was ogling that red ruby in "Aladdin."

Fun fact about this guy: he kicked one of the bouncy balls that littered the floor off a wall and hit a woman. Someone sign this dude up for a kickball league... he's got "My Left Foot" levels of power.

Here's me and my friend Isabel who represented Scotland. Yes, this could be a fair political representation of what Scotland leaving post-Brexit Great Britain might look like. THIS COULD BE YOU SCOTLAND BUT YOU PLAYIN'!

Still in her prison pinstripes, this escaped convict took the stage before several police officers tackled her to the floor. JK, this lady happened to have some killer moves (after being summoned by someone saying "Beetlejuice" three times).

Is this man doing the worm or is he in the middle of an exorcism? We'll never know! THE POWER OF DISCO COMPELS YOU.

Oh man, Fabio over here took off his shirt? What helpless fool has to follow this guy?

Here's when I first started busting some moves. There were no survivors.

Of course, someone decided to try and take over the stage when it was still my turn to dance. No word yet as to whether he was connected to the Lochte "DWTS" protesters.

Here's me right after I screamed "ERIN GO BRAGH" at the top of my very-depleted lungs.

Then, it was Scotland's turn. It was a 17-hour bagpipe performance.

The judges contemplatively looked on, tallying their marks and scores. Would I make it to the finals? COULD I BRIBE THEM WITH ME POT O' GOLD?

While the finalists were being determined, an impromptu dance party started.

Good news: I got into the finals! But I had to go head-to-head against five other contestants, like this snazzy ball-kicking dancer here.

After officially making it into the finals, I decided to begin my last round dance by appearing like I was trying to escape a straight jacket.

This is MFW there's a spider on the floor or (realistically) within a mile of me.

Here's me back-kicking a ghost!

Well, looks like the guy doing the worm wasn't going through an exorcism after all. And I called the producers of "The Conjuring" all for nothing.

If you're still reading this, congrats! You made it to the part WHERE I WON. (Cue the throne room theme song from "Star Wars.")

I, Tim of House McGovern, do humbly accept this honor upon bended knee. Winter is coming (it's LA, so like, it will rain maybe once).

That envelope right there holds $500, which probably makes this the closest experience I'll ever have to truly knowing what it's like to be a drug dealer.

Overall, if I had a message for that chubby kid grooving wildly at a family communion back into 1994, it would be to keep dancing through the sweat and being wonderfully weird.