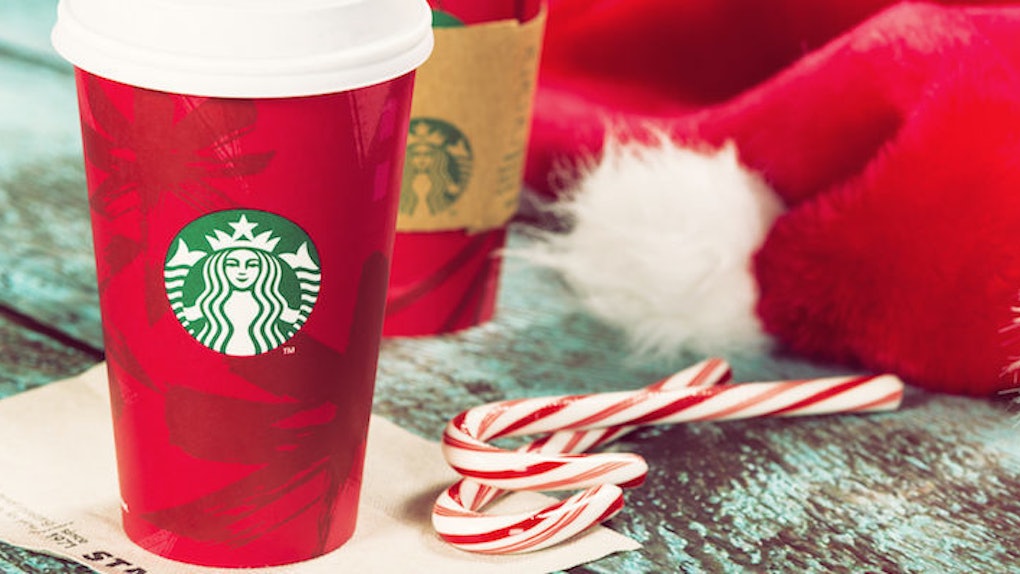 3 Companies That Are Ruining Christmas More Than Starbucks Ever Could

The news is always filled with stories that make you wonder why they were even stories in the first place, but there are an unprecedented number of candidates currently vying for the title of The Most Pointless Controversy of 2015.

Starbucks threw its hat into the ring last week when it announced the return of its signature red cups, an announcement that was quickly met with ire and outrage from people red in the face over just how red this year's cups are.

I apologize for that admittedly terrible wordplay. It won't happen again.

The anger is the result of a conspiracy that's currently brewing (sorry, I swear that's the last time) among customers who are concerned Starbucks' decision to remove the snowflakes featured on last year's design is a conscious attack on Christian beliefs.

Considering the word "snowflake" appears in the Bible approximately zero times, I can totally see why some people would be concerned Starbucks has taken a side in the bloody War On Christmas that has already claimed the lives of countless people.

It's pointless to explain why this controversy is pointless to the people who already believe in it, especially when there's a fair amount of overlap with the group that's been bemoaning the commercialization of Christmas for the past decade.

As far as I'm concerned, the issue isn't companies that refuse to give God free advertising on the side of their cups -- it's the places that insist on shoving Christmas down our throats before a Thanksgiving meal takes the same journey.

If we're going to demonize any companies, it should be one of these.

ABC Family recently announced the lineup for this year's "25 Days Of Christmas," an annual event showcasing the movies it would be kind of weird to watch on the other 340 days of the year.

As someone who has never paid for cable, there are many things in the world more meaningless to me, but I'll be spending the month watching my expertly curated collection of Christmas movies consisting solely of "Love Actually," "Die Hard" and "A Muppet Christmas Carol."

I'm not sure who's in charge of picking the movies that appear on ABC Family, but based on the lineup it might be time to hire someone new (coincidentally, my résumé can be viewed in the previous paragraph).

While viewers will be able to watch Christmas classics like "The Little Drummer Boy" and "Snow 2: Brain Freeze," they'll also have the chance catch every single "Toy Story" and "Willy Wonka and the Chocolate Factory" (in addition to the Tim Burton abomination of an adaptation that I refuse to acknowledge exists).

I'm not exactly sure how to interpret this. Is ABC Family saying Christmas is only about the chocolate and toys? What kind of toys? ARE THEY SECRETLY PROMOTING SEX TOYS TO CHILDREN ON A SUPPOSEDLY "FAMILY" NETWORK?!?!?!?

This Halloween, I did what I've done basically every single Halloween for the past five years: walk into a pharmacy and get some vampire teeth for a last minute pun-based vampire costume (my plan was to carry around a kitchen utensil and call myself "Count Spatula").

That's right: I hadn't even had the chance to complain about the lack of awareness exhibited by the throngs of trick-or-treaters crowding the sidewalk outside of my apartment and I was already being assaulted by Christmas imagery.

If anything, CVS is trying to dilute Christmas with other holidays. That's an outrage train I'll happily hop on.

The random cafe I regret walking into

I can only assume Mother Nature went on a week-long bender to celebrate Halloween this year because I can't think of any other explanation to justify the 70-degree temperatures I had to deal with for the first week of November.

This weekend, I finally left my apartment without a jacket and immediately regretted that decision upon going outside, so I decided to celebrate the occasion by ordering a coffee drink not containing ice for the first time in months.

I walked through the door of the nearest hip-looking coffee shop, which just so happened to be a trendy cafe with a "Bernie 2016" sign in the window -- not the kind of place you'd expect to be bombarded with an instrumental version of "Silver Bells" two weeks before Thanksgiving.

Starbucks has nothing on the blatant disrespect on display here. I wish I could tell you the name of the place so you can avoid it, but my brain has blocked out the majority of the memory to prevent additional trauma.