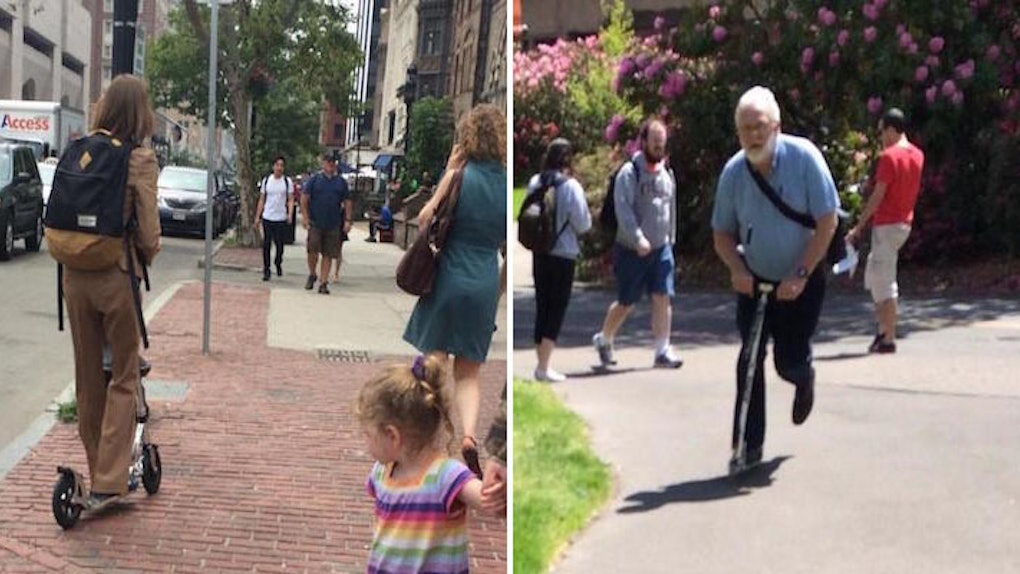 Every few years, a new trend emerges that inevitably forces people to take a moment of self-reflection to decide if they're willing to sacrifice self-respect and dignity in exchange for a product that makes a mundane task slightly easier to perform while making you look ridiculous.

Bluetooth headsets, fanny packs, those shoes that turn into roller skates, umbrellas that are also hats -- these are all inventions thats practicality is severely outweighed by the fact that it's impossible not to look like an idiot while using them.

I'm always on the prowl for a new trends I can criticize for no real reason, and over the past few months, I've found a new place to direct irrational amounts of hatred now that rants against the selfie stick are officially overdone.

There is a new plague upon us, and it comes in the form of supposedly mature adults riding Razor scooters in public.

If you're ready to start frantically pecking at your keyboard to fruitlessly defend these people, I strongly suggest you save the few calories you'd end up exerting for another useless argument on the Internet.

I've heard the arguments for this method of transportation: They're portable, lightweight, promote physical activity and can get you where you need to go quicker than walking alone. I won't debate any of these benefits.

With that said, I'd argue that they're outweighed by the fact that you're riding something designed to be taken off jumps made of plywood and cinder blocks by people hopped up on Surge in the early 2000s.

They were not, however, designed for people in suits commuting to work.

You might think sneakers somehow make it better, but I assure you, it's much, much worse...

If you tilt your head to the side, you might be able to make out a pair of Crocs on his feet.

I'm assuming she bought a scooter from a telemarketer thinking it was one of the ones you normally find clogging up the aisle at a Walmart.

This guy looks just like the billionaire from "Jurassic Park." That's all I have to say about this one.

However, it's not too late to turn things around.

Step 1: Lock your scooter to the nearest pole.

Step 2: Leave it there to rust.

That's it. In just two easy steps, you can do your part to make the world a less scooter-filled place.