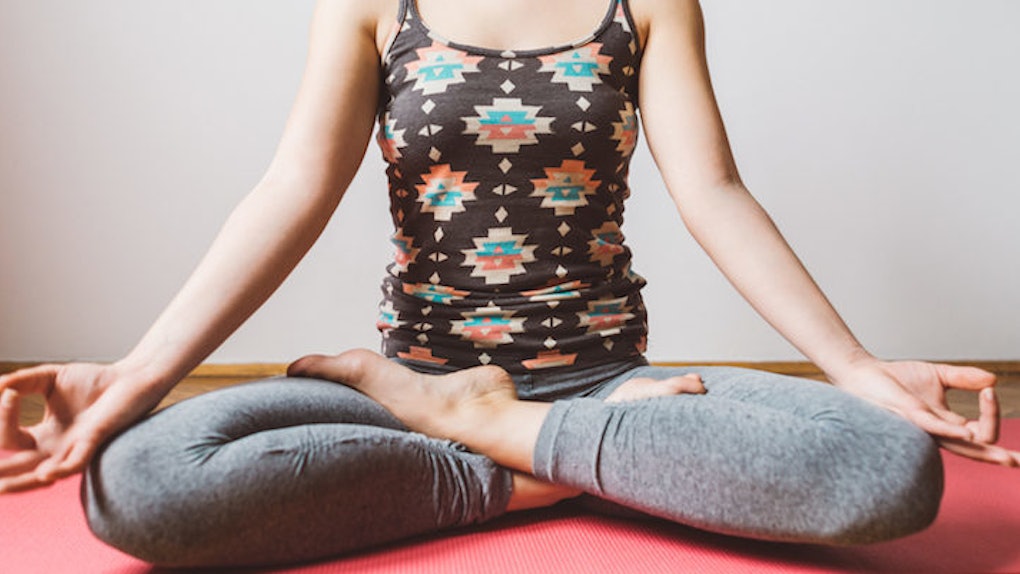 Profound Relaxation: Here's What It's Like To Visit A Ganja Yoga Studio

Seven people are lying in a circle in the center of a small room, lit only by candlelight from an altar. Wide sheaths of patterned silk are draped across the ceiling, casting a warm light on the room.

A small woman moves softly from person to person, bestowing them with a crinkly, air-engorged plastic bag.

Slowly, each person rises from corpse pose, inhales from the spout on the end of the bag and passes it back to the woman. She takes it and passes it on, stopping to inhale from it every so often.

This is what the final resting posture (savasana) of a ganja yoga class looks like:

The crinkly plastic bag is full of THC vapor, and the altar is home to a silver cone-shaped vape, which fills up the bags. Class begins with each person making an offering of cannabis and placing it in one of two small metal bowls: one for indica, one for sativa.

"Think of an intention as you put your offering in the bowl," our teacher, Eli Ruiz, instructs.

At House of Yoga on the edge of Toronto's Koreatown neighborhood, ganja yoga classes are de rigueur. The small room is tucked in the back of a head shop, and several ganja classes are on the schedule each week.

Class begins with about half an hour of vape time, and there's often a break halfway through for another few rounds. Class closes with another session "for a more profound relaxation," according to Ruiz.

The yoga portion of the class consists of all of my favorite lazy, decadent Hatha postures. We do long holds of Warrior II, a seated series stretching every muscle of the arms, and all of the juicy shoulder stretches.

Those who teach these classes are passionate about yoga, but they love bringing marijuana into it because it has a way of making people closer.

John Declan Farley, one of the studio's regular teachers, reveals,

In a non-ganja studio, it can be hard to break the ice. But if you pass that bag, the ice is broken. The actual act of smoking breaks down lots of barriers.

Farley's classes often stretch on well past the normal one hour to 90-minute window most people allot for a yoga class. It's not unusual for his Friday night class to span a full eight hours. Sometimes, everyone stays until 4 am (with the class starting at 8:30 pm).

Aside from yoga and meditation, the class has evolved to include snacks, tea breaks and eye cleansing.

"The ganja makes it special," Ruiz says. "The ritual of smoking creates a sense of community amongst the yogis here, with many of the same people coming back on a weekly basis."

Hannah, a woman in her twenties, tells me after class that she's always practiced yoga and smoked marijuana, so why not do both together with other like-minded people? She says,

I've done yoga at other studios, and I liked it. But this is different. It's a warmer environment.

Hannah's been coming to ganja yoga regularly for a few months now.

Though, for many, the draw to ganja yoga has to do with the community, there is space in the longer classes for reflection and introspection. During prolonged meditation, Farley says, "A lot of people tune into one phrase and go off on a journey."

Portions of Farley's classes are often conducted in pitch black, sometimes with the music turned off.

"Then, it's all about the internal," he says. "You can listen to your breath. You can hear your bones creak."

This post was originally written by Sarah Ratchford for Civilized.

Citations: What It's Like Inside A 'Ganja Yoga' Studio (Civilized)