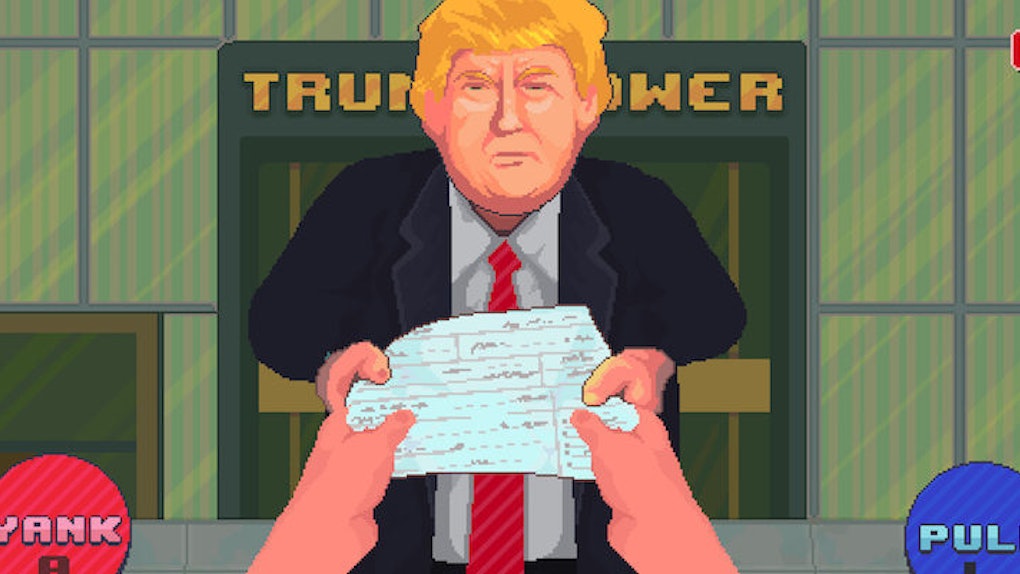 Deemed too offensive for the app store, the GOP Arcade lives on here, and the silver lining is it's more free than freedom.

Brian Moore, Chris Baker, Mike Lacher and William Herring are the minds behind these satirical slants on classic arcade games. You can now "Get Trump's Taxes," "Bomb the Right Place" and, if you're feeling especially adventurous, you can try your hand at "Science Fighter," "Good Guy with a Gun" and "Trump Toss."

We spoke to the guys about how their collaborative efforts bring out the best in each of them, as well as about the balancing act of satire with this particular joint effort. They even offer their predictions for the 2016 election, saying,

Trump! We can't wait to be the target of his sweeping new libel laws!

Check out our interview with these masterminds below, watch the preview for the video game above and play all the hilarious/terrifyingly accurate games here.

How was the idea for the GOP Arcade born? Have you ever shied away from bringing politics or mainstreamed beliefs into your work?

We tend to make a lot of dumb Internet jokes together, and we'd been thinking about making more games. We figured the election would be a fun topic to make a bunch of really short, topical games about. Some of our stuff is more political than others. A couple years ago, Baker and Lacher made this simple page joking about the NSA, and it quickly spiralled out of control (millions of views in a day and hackers actually using the hashtag we made to rally together and bring down the NSA's website, no joke).

What was your reaction when the App Store rejected the GOP Arcade, which now lives here? Do you carry that rejection like a badge of honor?

At first, sadness, pain, anger, regret. Late-night phone calls filled with tears. Angry screeds cut from magazines and mailed to Tim Cook. Chris made a crude voodoo doll that resembled Jony Ive, which he ran through the microwave a few times. But then, we figured we could put the games on the Web and reach more people that way.

How do you balance going so over the top, it's clearly satire, without just going over the top? What are some of the challenges that come with a project like this?

We tried to make all the games come from the same point of view -- that of the GOP. Keeping that consistent let us be pretty silly while rooting it in satire. We also hope to include more than a few games that are underhandedly educational. Like "Bomb the Right Place," which can actually sharpen your middle eastern geography.

Were there any arcade games you toyed with that remained in the ideation stage?

We've got a pretty long list, and we're hoping to build as many as possible, so we haven't written anything off yet. Some of the games we're excited about are "Restroom Defender," "Mavis Beacon Teaches Trumping" and maybe a tower defense game where you try to stop minorities from voting.

How long have you all been collaborating on projects? How do you enable your partners to reach their creative potentials? Are your partnerships built on having similar styles, or is it more a chemistry of differences?

We've been working together for about four years now and have done quite a few projects -- everything from apps to videos to bots. At this point, we're pretty familiar with everyone's strong suits, and we just let people do what they do. Conceptually, we're all on even ground, but Mike and Brian lead on the development side of things, while Baker, a copywriter by trade and, thus, fairly useless in the normal development cycle, plays more of a producer role, like when he wrangles outsiders to step in and help out where needed.

Chris would like to add that he will undercut any other freelancer's rate by 30 percent, with a delivery of 60 percent better ideas. Recruiters, please contact him at once -- and don't ghost him!

This interview originally appeared on Free Range, the Working Not Working blog.