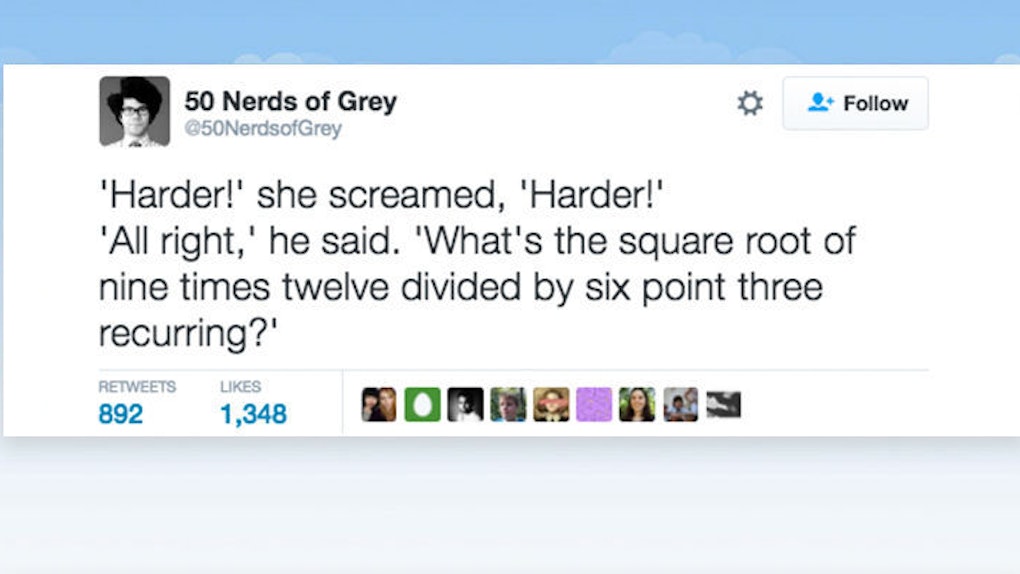 There's no denying "Fifty Shades of Grey" is one seriously steamy novel.

Yep, there are a lot of spin-off accounts on Twitter that turn you favorite lines from Christian Grey and Anastasia Steele into all sorts of creative quotes that are pretty damn comical.

However, I recently came across a parody account that might be the best one I've seen thus far. Behold, "50 Nerds of Grey."

As the name implies, this awesome Twitter account transforms all sorts of provocative phrases from this story into nerdy lines that will make you laugh until you hurt.

No really, you might want to pick a safeword before reading these nerdy tweets.

This ingenious Twitter perfectly captures the geeky awkward side of erotica, and if you ask me, these tweets are basically hilarious mashups between "Fifty Shades" and "The Big Bang Theory."

For a closer look at 50 Nerds of Grey, check out the tweets below.

No girl can resist the scent of this musk.

He was very careful during bondage sessions. He always used a safe word that contained upper and lower case letters and at least one number. — 50 Nerds of Grey (@50NerdsofGrey) April 7, 2016

I don't need a spell to make you fall in love with this wand.

My bad, I thought this was Tinder IRL.

Come to the dark side.

There was something between them - something special, something dark . . . It was his 1:10 scale limited edition Darth Vader action figure. — 50 Nerds of Grey (@50NerdsofGrey) April 23, 2016

Ugh, I just love it when you talk QWERTY to me.

Whips and restaurant chains excite me.

Who needs a phone sex hotline when you have IT support?

I'm Captain America. How much more protection could you want?

These headphone cords are really getting out of hand.

He lay there helpless, his legs bound together and his hands tied behind his back. He really needed to get a cable tidy for his headphones. — 50 Nerds of Grey (@50NerdsofGrey) April 13, 2016

"Hufflepuff in the streets, Slytherin in the sheets."

Despite his innocent asthmatic public image, he was a real snake in the bedroom. Hufflepuff in the streets, Slytherin in the sheets . . . — 50 Nerds of Grey (@50NerdsofGrey) April 8, 2016

Arithmetic is just so sexy, don't you think?

I'm going to punish you with this sh*tty Apple update.

Now, give me some calculus!

Citations: This Nerd Is Rewriting '50 Shades Of Grey' And It's Better Than The Original (BoredPanda)