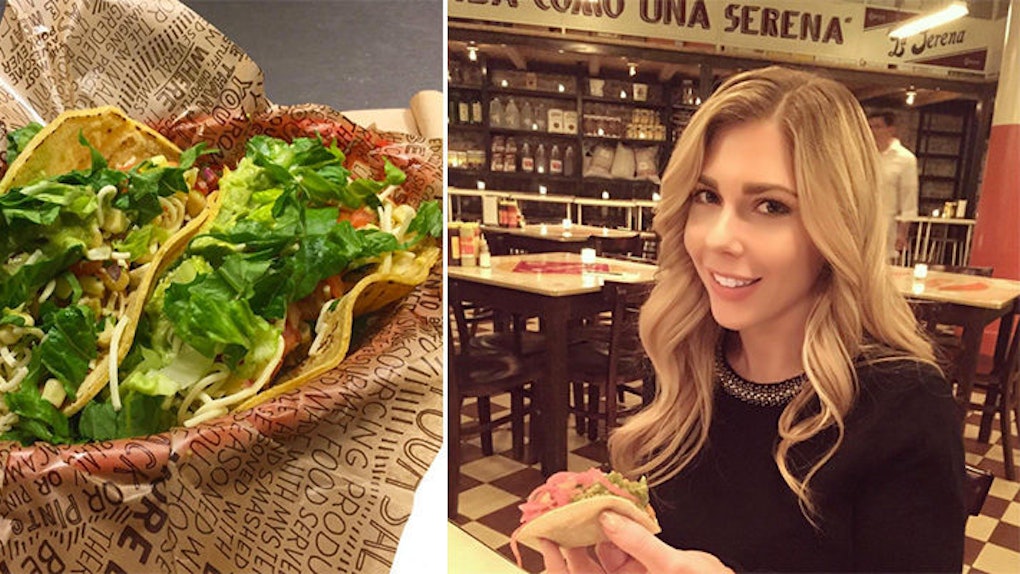 By now you've probably heard about Charlotte Palermino, the woman who went on a week-long "pizza cleanse" and actually lost weight.

If you haven't, let me fill you in.

Palermino basically went on your run-of-the-mill juice cleanse, however, this evil genius swapped out the nasty liquefied kale concoctions for all sorts of tasty slices.

That's right. She stuffed her face with straight up pizza for a week and lost five pounds.

This badass diet inspired me to go on a cleanse of my own.

If there's one day of the week I love just as much as Pizza Friday it's Taco Tuesday because let's face it, tacos are delicious AF.

So, I grabbed my sombrero and set out to fulfill my dream of making every day Taco Tuesday by going on an epic taco cleanse.

That's right. No coffee. No booze. No supplementary chips and guac.

Just racks on racks of tacos.

And you know what? I actually lost four pounds in the process.

But then again, I guess that shouldn't be too surprising since a taco in each hand is basically the same thing as a well-balanced diet, right?

In theory, inhaling tacos all day long sounds pretty damn awesome, but it turns out this tortilla-filled food experiment wasn't exactly the fiesta I thought it would be.

So without further ado, let's take a moment to taco 'bout my diet.

Last week, I went on a "taco cleanse" and ate nothing but tacos for six days straight.

I kicked off day one with a tasty trio of tacos from my favorite spot, Cafe El Presidente.

On day two, I was feeling pretty good so I headed over to Dos Caminos on Park Ave and demolished a plate of fish tacos.

I hit up Cafe El Presidente later in the day for taco round two. My official count was up to eight and I was already getting pretty sick of these things, so I knew this was going to be a long week.

On day three, I think all those tacos finally started catching up with me because I felt like sh*t. I had horrible heartburn for most of the day but, nonetheless, I weathered through the acid storm in my throat and upped my taco tally with some chorizo tacos from Sabor A Mexico Taqueria...

...plus a plate of carne asada tacos from Salvation Taco.

By day four I was really struggling and spent most of the day dreading the thought of eating another taco. But I knew I was in too deep to turn back, so I ate an Adobada taco from Los Tacos No. 1...

...and somehow managed to stomach several salmon tacos from Vamos later in the evening.

I felt a little bit better on day five, although I was getting really, really sick of Mexican food at this point and probably would have sold my soul for a few sips of coffee. I reluctantly upped my cleanse count with a couple chicken tacos from Chipotle...

...and polished off an insanely delicious tray of shrimp tacos from Ottos Tacos.

On day six I thought I might actually be dying from a taco overdose, but it was the last day of my cleanse and I really wanted to finish off strong. Since I felt so terrible, I figured I would try to be "healthy" by opting for a veggie taco from Five Tacos.

I continued the taco tour by taking on some chicken tacos from Dos Caminos later in the day.

I brought the final taco tally up to 28 by crushing a couple victory tacos at Empellón Al Pastor. Although I felt pretty awful, I'm happy to report that my torturous taco diet was somewhat of a success because I did lose 4 pounds in the whole tortilla-filled process.

However, I probably wouldn't recommend this diet to anyone because quite frankly, forcing tacos down my throat every day made me feel like absolute sh*t. Not to mention, eating tacos by themselves is not nearly as much fun as eating tacos with a side of guac and an ice cold margarita.